Book Review: “How to Lose a Country” 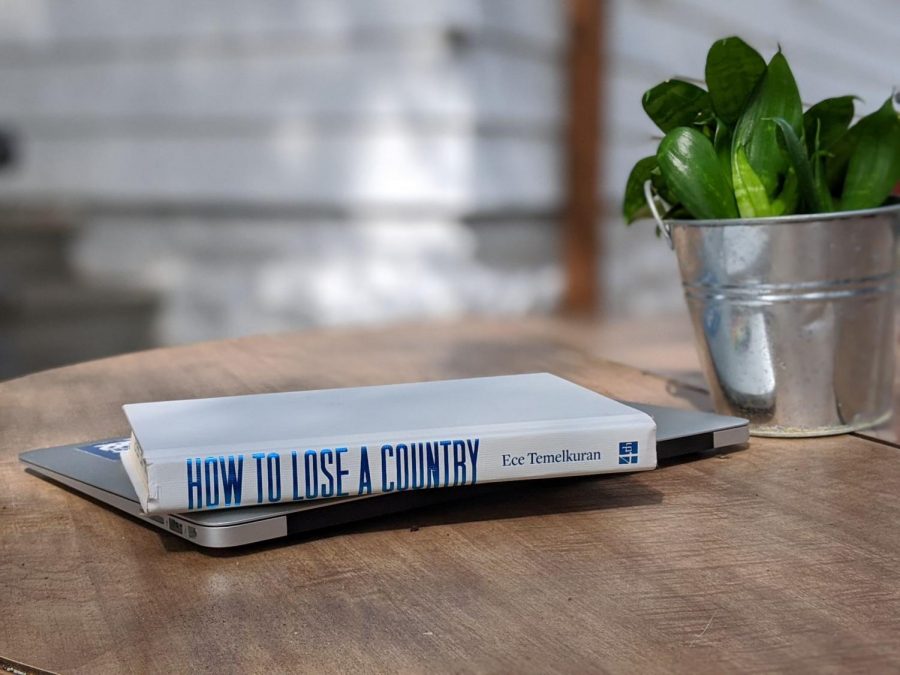 "How to Lose a Country" by Ece Temelkuran. Photo courtesy of Yigit Kahyaoglu '22.

In February 2019, Turkish journalist Ece Temelkuran released her book “How to Lose a Country: The 7 Steps from Democracy to Dictatorship.” The book received a lot of praise from intellectuals everywhere, and so did its author. A journalist who was openly critical of the Turkish government, her name appeared often on the news and on social media during the Gezi protests of 2013, a series of anti-government protests that defined the political atmosphere of the 2010s in Turkey, not just by its sudden flame, but also its tragic demise. Temelkuran was one of the journalists who were targeted by pro-government agencies for “conspiring against the Turkish people.” Years of harassment by Erdogan supporters eventually led her to self-exile. Since then, hundreds of journalists, academics and artists found themselves in similar positions. They either had to self-exile like Temelkuran or face an indefinite time in prison for ridiculously vague and meaningless charges.

During her years of self-exile, Temelkuran traveled across the United States and Europe and gave numerous talks about politics, the rise in right-wing populism and the fragility of democracy. She made it her mission to tell people what happened in Turkey, and that people everywhere should be more careful with the state of their democracy. In the “Introduction,” she recalls a woman from the audience in one of her talks, who asked a question that is as compassionate as it is oblivious: “So what can we do for you?” Temelkuran mocks the woman’s naiveté and sees it as the epitome of a Western blind confidence in the stability of democracy. In return, she asks the woman from the audience: “Actually, what can I do for you?” This, she says, is her purpose in writing the book — to tell people that democracy should not be taken for granted no matter the history of your country, especially when we see politicians like Donald Trump, Boris Johnson, Viktor Orbán and Erdogan becoming more and more prominent in global politics. She argues that even the most well-formed democracy is fragile, and if our confidence in our political institutions come to the point where we neglect the problems, we are on our way to losing democracy.

Her rationale for writing this book matches her style. This is not a complex and in-depth analysis of right-wing political movements. Instead, there is a sense of urgency that permeates her writing. She wants the reader to take away some lessons from what happened in Turkey starting in the early 2000s, and she wants us to do it quickly. She uses stories, both personal and those she heard from others, in order to make sense of this bizarre political phenomenon that can implode even the strongest democracies. She starts in the early 2000s, when she was a young journalist. This is also the time when the AKP, Turkey’s governing party for the last 18 years, is starting to form a movement. The beginnings of Erdogan’s rise to power bear eerie similarities with that of Donald Trump’s. Erdogan’s rhetoric started off as an empowering voice of the real people, whose concerns were neglected for decades by the elites of the political establishment. Both these leaders have capitulated from the politicians’ neglect for religion, as well. Turkey is a secular republic with a majority conservative Muslim population, and the conflict between secularists and those who want religion to play a larger role in politics has been a defining feature of modern Turkish politics. For decades, it was practically a taboo for a politician to run on a religious platform. Even Erdogan started as a liberal who was willing to bring religion into politics only to a certain extent, but as he grabbed more power, the more we started seeing religion imposed in politics. This was justified, of course, because it is what the real people wanted, and a democracy surely could not oppose the will of the real people. This distinction between the real people and those who are apparently less than real is of the utmost importance for Temelkuran. This is how it all begins, she says.

In the following chapters, Temelkuran walks us through the many steps by which the will of the real people dominates politics more and more, and how those who are less-than-real struggle to find a place for themselves not just in politics, but in the country. She observes well that a movement that brands itself as the “real people” basically get a moral upper-hand in everything. If you are in any way in opposition to the “real people,” it only means that you are the problem, since only an oppressor would dare go against the will of the people. As such, Temelkuran suggests, all norms that we used to have in political discourse vanish. There is no longer what we can plausibly call “rational debates.” There is only whatever the people want. And what the people want, they get. Any objections, however rigorously they are argued, will only be met with fallacies and demagoguery, making it impossible to argue politics with people who you do not already agree with.

According to Temelkuran, it all goes downhill from there. Once the moral and political superiority of the real people is established, it doesn’t stop anywhere. The once-respected institutions of law are soon to be irrelevant. No judge can pass a verdict on the real people, nor can a prosecutor ever investigate them — the basic principles and institutions of democracy become mere parodies of themselves. Her observation that justice erodes as populism gains more power is quite accurate, but she is not immune to a certain “Golden Age” fallacy: she does not even consider that these institutions may have been flawed from the beginning, making it easy to corrupt them.

As populists consolidate their rule, there will arise an “ideal citizen” of the state, who will show up everywhere, and those who deviate from this image will feel like they have no place in society. She rightly emphasizes that this is especially true for women. In Chapter 5, “Design Your Own Citizen,” she recalls her experience as a progressive woman in an increasingly conservative country. Her presence in politics had become less and less tolerable, and women like her were replaced with a more conservative, “modest” and consequently more subservient type of individual. This was true everywhere else, too. In academia, for example, lots of left-leaning academics lost their jobs and were replaced with people who agreed with the government a lot more.

There is, of course, the occasional resistance. Like the Gezi protests in 2013, where thousands of people simply had enough with the government and took to the streets. The liberals and the progressives of Turkey still remember it as a time of glory. After a long time, they felt a rebellious yet compassionate spirit they thought they had lost. It was a time of great excitement and unity, as well as great humor. Protesters who were clearly high on adrenaline after running from the militarized police somehow found a renewed sense of humor on the way. one that was unapologetically defiant and hilarious. After a few weeks, the protests faded out as the primary objective, protecting the Gezi Park in Istanbul, was achieved. Yet the new sense of humor remained for the following few years. It was a reaction against an authoritarian government, and at the time, it felt incredibly powerful to be able to punch up by merely making a joke. It seems a global phenomenon that whenever a government imposes stricter control over people, political humor starts to flourish. This is the danger, though, for Temelkuran. It is too easy to confuse tweeting political jokes with genuine political action. There is an undeserved sense of satisfaction we may derive from political humor, that if you are able to joke about it, you have full control over it, and there is no more work to be done. This is not the case, however, and the power of humor vanishes without actual political work.

So far, my account of Temelkuran’s book is quite pessimistic, but so is the book itself. Apart from a few final paragraphs, she describes the conditions that right-wing populists come to power and take control. Her descriptions are substantiated with personal and historical evidence. A lot of her observations are also right on point. She has obviously observed world politics closely, and she analyzes them with the meticulousness of a journalist. Moreover, she connects political phenomena from across the globe, successfully showing that right-wing populism works more or less the same way everywhere.

However, after having shown all there is to show, she makes very few concrete statements about what to do when we face a surge in authoritarianism. She cautions us against choosing to “resist in the edges” with subtle political humor on Twitter and other generally inconsequential methods. In the spirit of Hannah Arendt, the great political theorist of the twentieth century, she advocates for political action and not just mere understanding and theorizing. We can all agree that progressives around the globe, at least those from the middle class, have a tendency to get buried in political philosophy and theory with no time left for action. She does not specify, however, how we ought to take political action. The last few pages where she discusses this need for action feels rushed — there is no substantive call for action, no gameplay. As such, the book feels rather incomplete. Perhaps Temelkuran wants to address how one ought to take political action in a future work.

Apart from the lack of a strong conclusion, her analysis misses adequate acknowledgement of class. She talks plenty about how right-wing movements become popular among rural and lower-income segments of society, but there is no further elaboration on why that is so. In fact, her tone often comes across as rather classist. At times, it is difficult to determine whether she is talking about the lower-class as being liable to right-wing populism, or if she is blaming them for it. The few times you see implications of social class are usually when she describes her own experiences. Temelkuran comes from a well-off, upper-middle class Istanbulite family, and she wants her readers to know this. Given the personal nature of the book, this is generally fine. She sometimes goes overboard, however, like when she talks about how she had to find an expensive coat from a Paris boutique, even though she liked her old one better. She flaunts her upper-class problems with a seeming lack of awareness that most people cannot relate to her stories at all. She is on par with a lot of Turkish leftist intellectuals, most of whom come from well-off backgrounds and meet leftist politics either through their intellectual parents, or in university, advocating for the empowerment of workers and peasants without ever holding an actual conversation with them. Temelkuran differs from this stereotype in that she is a political journalist who covered small-town and rural politics. This, however, only makes it more disappointing to see her lack of attention to class. Political analysis without consideration of economics is always inadequate, and the shortcomings of Temelkuran’s analysis are hard to ignore.

Despite these flaws, she makes a good contribution to the contemporary political discourse on right-wing populism. It is a very accessible read, and a timely one too. If you are at all interested in making sense out of the last three and a half years of the Trump presidency, and are curious of what may come next, “How to Lose a Country” is a worthy read.