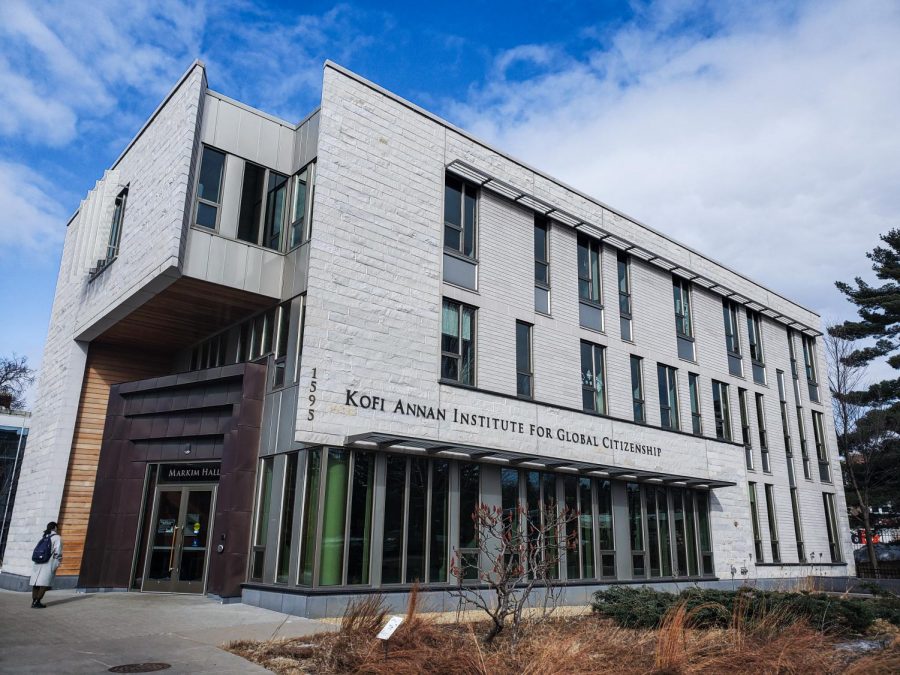 On Sept. 3, an email to the Macalester community from Donna Maeda, dean of the Kofi Annan Institute for Global Citizenship (IGC) announced the 2020 International Roundtable (IRT) theme: “Facing Pandemics of Disease and Race: Radically Reimagining for Liberatory Futures.”

But several Black students at Macalester, including those who pushed the administration to respond strongly to the racial justice uprisings over the summer, are skeptical that the roundtable will meaningfully address racism at the school.

“At present, the world is facing more than one pandemic: the coronavirus, white supremacy, anti-Blackness, and racism,” Maeda wrote. “While the outbreak of COVID-19 has appeared recently, it intersects with long histories of anti-Blackness and racism.”

In a normal year, Macalester’s annual International Roundtable is a multi-day event in October that explores critical social issues in the form of workshops and events with a variety of speakers and facilitators.

Back in November 2019, shortly after the previous roundtable concluded, the IGC announced what was to be this year’s theme: Protests Around the World. But the IRT planning committee was forced to switch gears when the COVID-19 pandemic hit in mid-March.

“We had a couple of speakers in mind that would come from different parts in the United States, and that became immediately not possible,” Maeda said.

“Rather than scaling such a large topic down, we decided to take the opportunity to engage in questions about the changing world we now inhabit.”

The IRT planning committee has not released many details publicly about how the roundtable will work in a virtual format. One of its signature programs, however, will be “Challenging Complicities,” an initiative that will call on faculty across departments to examine the “colonial roots” of their disciplines.

Maeda explained that, over the summer, the IGC planning committee reached out to students who had participated in the initial IRT planning. After March 16, when students were sent home for the rest of the semester, Maeda said that pandemic-related concerns became more pressing than planning the fall IRT.

“When we had to go virtual, and students were having to leave campus and figure things out, it immediately started to be hard to get in touch with students in a way that we could have ongoing and in-depth conversations,” Maeda said.

Maeda said that she and the IRT planning committee reached out to students who participated in the planning sessions over the summer to see if they’d still be interested in weighing in on the planning. Though a few said yes, when the committee organized a virtual meeting, only two students showed up.

“One of the students [at the meeting] said, ‘right now students are having to work,’” Maeda said. “’And I’m not sure this is gonna be top of mind of anybody.’”

Reactions from students, Black students in particular, are mixed. In particular, some students take issue with the framing of COVID-19 and racism as “dual pandemics.”

“It’s just the same wording over and over again,” Autumn Campbell ’21 said. “It’s become a buzzword… a catchphrase for Mac to show how woke they are, and not really think about the systems that they help perpetuate.”

“I know it’s not their intention, but it does make systemic racism seem like it’s something that only happened in 2020, when it’s been my whole life and my mom’s life and my grandmother’s life,” Briah Cooley ’21 said.

“I do appreciate that they are working to put Black and brown people at least at the forefront of these types of things,” Campbell added. “Because that does make a difference in the type of conversation it is.”

Maeda said that the IRT planning committee is trying to move away from the language of “dual pandemics” in the most recently revised description of the roundtable. Still, Maeda believes that the “pandemic” framing gets at the pervasiveness of systemic racism.

“When we think about the pandemic of disease, it’s not just like, wow, a lot of people have this disease,” Maeda said. “It’s a pandemic, It’s massive, and it’s shaped everything. How can we start to think about anti-Blackness and racism as massive and shaping everything?”

Marjorie Trueblood, dean of multicultural life, is on the planning committee for the IRT. She said that a student approached her with concerns about the theme, too.

Cooley wishes that, despite the difficulties that came along with planning for the IRT this summer, the school had attempted to notify students about the chosen theme.

“If I had just been asked how I felt about it I think I’d feel a lot better,” Cooley said. “It’s not just the topic that upset me, it’s that they didn’t ask.”

At a predominantly white institution (PWI) like Macalester, some Black students distrust Macalester’s ability to adequately address issues of racism and anti-Blackness. Macalester’s student body is around 61% white, and only around 3% of students are African-American or Black. Macalester’s faculty is nearly 79% white, and around 6% of faculty are Black.

Over the summer, Black Liberation Affairs Committee (BLAC) called on Macalester to make a strong commitment to racial justice following the killing of George Floyd at the hands of  Minneapolis police officer Derek Chauvin on May 25.

In a June 1 open letter to President Suzanne Rivera and other senior administrators, members of BLAC pressured Macalester’s administration to “take decisive anti-racist action, or else we are an institution like any other that upholds the status quo of racism and white supremacy.”

“Dr. Rivera, you rightfully said this morning that it is time for action,” the letter reads. “We appreciate the sentiment, and raise you one more: prove it.”

The letter calls on Macalester to donate to local organizations like Black Visions and Reclaim the Block, condemn the deployment of the national guard during the June uprisings and to unequivocally support the movement for Black lives.

President Rivera met with the students virtually shortly after they issued the letter, and soon after, released a message detailing how the college would improve its commitment to racial justice during her tenure. The school launched a donations matching fund, where the school matched donations up to $20,000 for racial justice organizations. Rivera also announced the launch of a new program to recruit and support domestic students of color.

Still, some students were dissatisfied with the college’s response to the June uprisings, and remain skeptical that the college is committed to meaningfully addressing racism and anti-Blackness on campus.

“I just wasn’t completely satisfied with their response to the protests in Minneapolis,” Whitehurst said. “Especially considering how close the school is to everything that was happening.”

“I can’t ask the college to decolonize itself,” Whitehurst continued. “I think that the people involved in the community around it have to go through their own social, emotional development, spiritual developments and then maybe that creates… an actual change.”

“It felt like we had to force the school to do something, because we were waiting and waiting,” BLAC social media coordinator Tokosang Lokule ’23 said.

“I’m going out of an interest to see what they have to offer, skeptical interest I think is what I would describe it as,” Campbell said. “I’m not excited, but I wanna see what it’s gonna be about.”

Students want to see Macalester do more to challenge anti-Blackness and promote racial equity. But some worry if the school is capable of doing so at all.

“I think after that we as an organization, and just me as an individual, have moved from wanting to make demands from [Macalester] admin,” Whitehurst said. “This is something that we need to do ourselves… we’re going to be the ones who have to make a cultural change at Macalester.”

What that will look like, according to Whitehurst, is BLAC members focusing on their own wellbeing first.

“This year, we’re focusing on creating the best version of yourself to be most capable of combating racism,” Whitehurst said. “Radical self care, I believe Angela Davis calls it.”

Whether the college’s anti-racist initiatives will ease the concerns of Black students, however, remains to be seen.

President Rivera sent out a memo on Sept. 16 detailing more anti-racist commitments the college is making. These include mental health initiatives for BIPOC students and a racial equity support program that will fund racial justice project applications from students, faculty and staff.

“We cannot take our foot off the break [sic],” President Rivera wrote in an email to The Mac Weekly. “It will require all of us working together in a sustained way to make meaningful and lasting changes.

But at a PWI like Macalester, where the student and faculty demographics do not reflect the diversity of the United States as a whole, addressing racism is an uphill battle.

“If anything, the best way the school can deconstruct racism is by having more Black students and BIPOC students at the school,” Lokule said. “It’s hard for this small minority of people to fix and do everything when we’re hardly even here.”