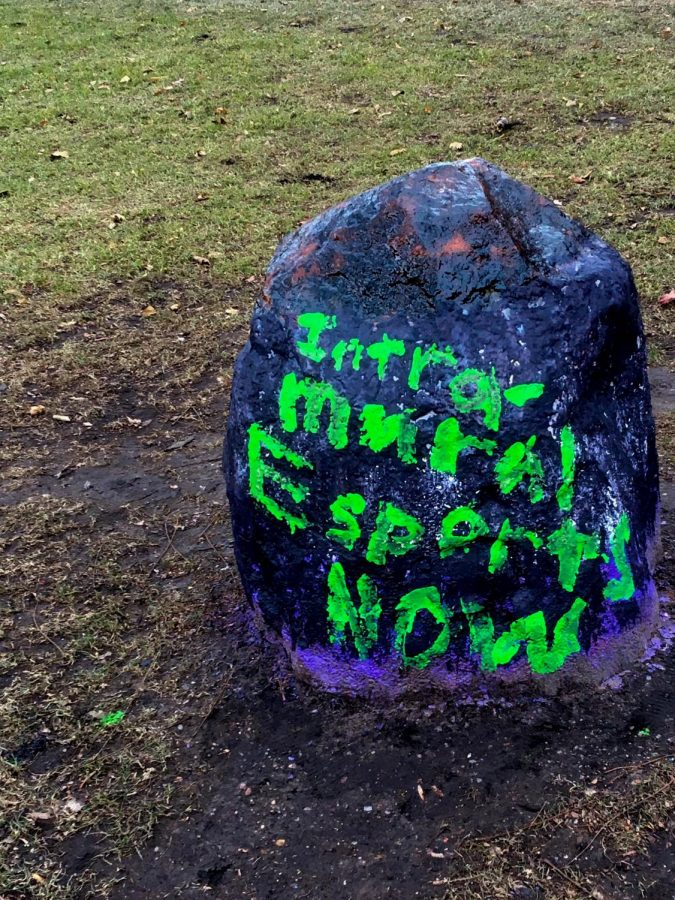 On Aug. 24, assistant men’s basketball coach Conner Nord emailed students asking them to fill out a survey on interest in esports and announcing the college’s collaboration with the company UniEsports. On Sept. 3, Nord announced that Macalester would introduce esports as an intramural sports offering this fall along with Bags (corn hole) and Spikeball.

Esports are a competitive form of online gaming complete with professional teams, tournaments and their own ESPN section. Many other schools have implemented esports programs, including Concordia University-St. Paul, which competes in the Division II Northern Sun Intercollegiate Conference as a part of the National Association of Collegiate Esports (NACE).

“The popularity of esports over [the] last few years has continued to grow and is a topic of conversation on the national level in the NCAA and other collegiate organizations.” Assistant director of athletics Steve Murray wrote in an email to The Mac Weekly. “There is a lot of excitement right now around esports, we have seen it grow from being a student org to a competitive club sport and even a competitive varsity sport at some institutions.”

Initially, esports will be an intramural sport with different competitive games offered for all skill levels. Nord wrote in an email to The Mac Weekly that Macalester Athletics will continue to look at student feedback about the program in order to determine if there is interest in moving to club or even varsity competition.

“I think definitely the future for esports at Mac is that we bring it to, like, a club sports level,” Jason Tran ’23 said. “We do think that we’ll get to a certain point where the future will be having actual competitions with outside groups.”

Tran was the student who first brought the idea of an esports program to Nord last fall. However, Tran stepped back to focus more on his intense pre-med course load. Another student, Kenny Nhan ’23 got a group together, including Tran, and set up an interest group in the spring before the coronavirus pandemic.

“I was actually kind of making a team with some other friends on campus,” Nhan said. “We were trying to play at a collegiate level, just for fun.”

When Macalester moved remote due to the pandemic, however, both Nhan and Tran lost track of the idea until the beginning of August when Nord reached out to Tran about the college’s work with UniEsports.

UniEsports provides colleges with the data collection services needed to develop an esports program. They collect surveys and feedback from students, staff, faculty and administrators, then analyze and synthesize that information to make recommendations to colleges and universities about their programs.

“Our philosophy around building a program is you need — before you launch in, before you spend thousands and thousands of dollars on a program on equipment, coaches — you need to understand the landscape of esports at your school specifically,”  co-founder and CEO Jesse Bodony said. “What you find there, what that data tells you has serious implications for how you decide to build your program.”

UniEsports has worked with everyone from community colleges to Division I universities to small liberal arts colleges such as Division III Wheaton College (Ill.) and Division II Eckerd College (Fla.). They do most work on the back-end, collecting data and information and analyzing that to inform college athletic departments and administration what esports could look like for their specific school.

“We looked at several companies to determine what would be best for our situation and for Macalester College.” Nord wrote in an email to The Mac Weekly. “Uni Esports [sic.] had the best track record for developing programs at small liberal arts colleges.”

Bodony echoed this, emphasizing that liberal arts colleges move faster than large universities in developing and launching new programs like esports and can tailor their programs more specifically to a unique subset of students.

“If you have a smaller school and maybe you have a kickass computer science major, something like that, you may say from the get go that you’re going to be rolling out a program with a specific emphasis around this major,” Bodony said. “Or maybe it has this sort of tie in or it has a community partner in this unique way… You create a program that has a unique twist or skill to it.”

However, he also noted that smaller schools tend to run into funding problems for specialized equipment and programming. Macalester plans to offer opportunities for students at all esports levels at least some of which will not require additional equipment.

“Anything is usually better than nothing,” Bodony said. “Because if you only have the resources to get five computers in a room or 10 computers and a Playstation or a GameCube that’s already increasing the opportunity for engagement that there are students at your institution don’t have.”

With the majority of students off-campus this semester, the athletics department is hoping esports will be a method of community building and engagement for students who otherwise might not stay connected to campus.

“Although we had begun to explore what esports could look like as a competitive sport over the past couple years, it wasn’t until this past spring with the pandemic that we looked at it as an option to engage all students at Macalester and to use it as a way to bring students together in a time when COVID-19 has made that a challenge,” Murray wrote.

Tran and Nhan both acknowledged that COVID-19 and the remote nature of module one for the 2020-2021 school year contributed to the renewed push for esports. Tran agreed that one of the main pillars of esports is community building.

“Esports is a competitive, cooperative and community building activity that really emphasizes a lot of the values and skill sets required in conventional athletics so think football, basketball, baseball, that kind of stuff,” he said.

“Tons and tons and tons of people play video games and so having that opportunity to connect with other people and make new friends and compete or just hang out casually? That’s what an esports program can do,” he said. “It can bring people together and that’s a really powerful thing.”

There are already signs that Macalester may have potential for an esports community. Almost 500 students responded to the UniEsports survey at the end of August. Tran’s Mac Daily posts and Google Form about the interest group last spring garnered many responses as well.

“I never honestly thought demand would be this high,” Tran said. “The one word I would use is shock.”