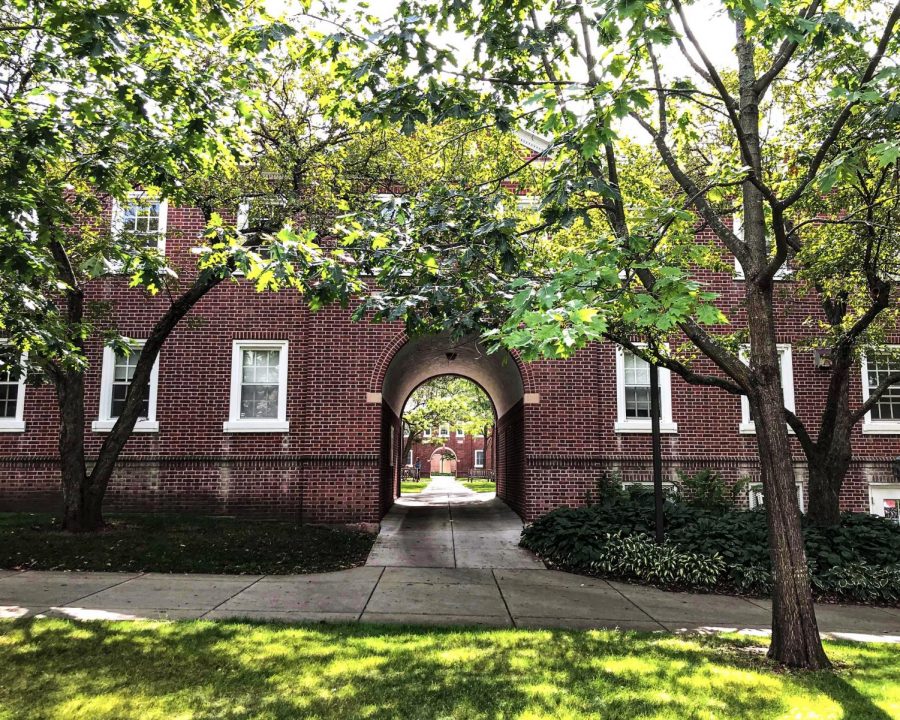 On Friday, Aug. 28, the weekend following their arrival to campus, a group of first-years living in Kirk Hall threw a party in the dorm’s courtyard. Details of the event are few. The exact number of attendees and the duration of the party remain unconfirmed.

But the gathering violated Macalester’s “Mac Stays Safer” community commitment, put in place to prevent the spread of COVID-19 and other infectious diseases on campus. The guidelines include a provision that gatherings of people outside a pod must be physically distanced and everyone must be masked.

The night of the party, responding Macalester public safety officers noted 13 counts of community guideline violations in Kirk Hall between 10:22 and 10:45 p.m. In an email to The Mac Weekly, Public Safety Director Jim Kurtz confirmed that these were primarily physical distancing violations

One first-year, who lives in Kirk but did not attend the event, said the gathering was broken up at least two times by public safety before students finally gave up efforts to rekindle the party.

Macalester’s Director of COVID Operations, Paul Overvoorde, was unable to confirm the details of the event, saying he had only received “rumors” and “hearsay.” That said, he did condemn any breaches of the community commitment.

“The violations… do trouble me,” he said. “We are only as strong as our weakest link.”

In general, all violations of the community commitment will be handled in accordance with the student handbook and through Residential Life or Student Affairs. The consequences for violating the community commitment range from letters of warning to revocation of in-person privileges, meaning a housing contract termination, and the issuance of a trespass notice banning the individual from campus.

According to Associate Dean of Students Andrew Wells, in the event of a potential conduct violation, students are invited to a meeting with a hearing officer to discuss the incident and go over potential sanctions. This hearing officer would be a staff member from either Student Affairs or Residential Life.

Wells said that violations that take place in the dorms, like the Kirk Hall party, would most likely be handled by Residential Life. Neither Assistant Dean for Residential Life Coco Du nor Associate Director of Residential Life Marian Aden responded to a request for comment.

In module one, with primarily first-years living in residence halls, Kirk is home to student-athletes. Between its close proximity to the Leonard Center and the provision that athletes eat in the LC separate from other students during the quiet period, some first-years have taken to calling Kirk “Olympic Village.”

The day following the gathering, Athletic Director Donnie Brooks sent an email to all Macalester student-athletes calling any violations of the community commitment “unacceptable.”

“Your opportunity to remain on campus, train, and ultimately compete relies on your compliance,” Brooks wrote. “In order to enjoy the on-campus experience, we must make a harder or more inconvenient right decision over the “Fun” or easier wrong decision. That decision is called leadership and includes holding your teammates who are not compliant accountable.”

The Kirk Hall resident, who spoke to The Mac Weekly on the condition of anonymity, said that while they don’t condone the gathering, they aren’t surprised it happened given the current living arrangements at the college.

This student said they felt the guidelines around what the college expects from on-campus residents are still hazy. Particularly unclear, they felt, was the definition of a pod and strict regulations on exactly what types and sizes of gatherings are permitted indoors and outdoors.

“It’s just one mistake,” they said. “This is the first time it happened, I think people learned the rules.

“I hope that going into the future, athletes and non-athletes — this does not just pertain to athletes, it just so happened that it happened in Kirk — I hope that people will be more cognizant and aware of their actions,” they continued.

Overvoorde emphasized that whatever violations have occurred since the semester started have been outliers.

“There are a lot of people who are taking seriously that community commitment, and there is a sense of optimism with that,” he said.

As of the first round of testing, which took place in the days before the Kirk Hall gathering, Macalester had no on-campus cases of COVID-19 and two off-campus cases. The second round began on Tuesday, Sept. 8 and will continue through Sept. 11. Results are expected the following week.