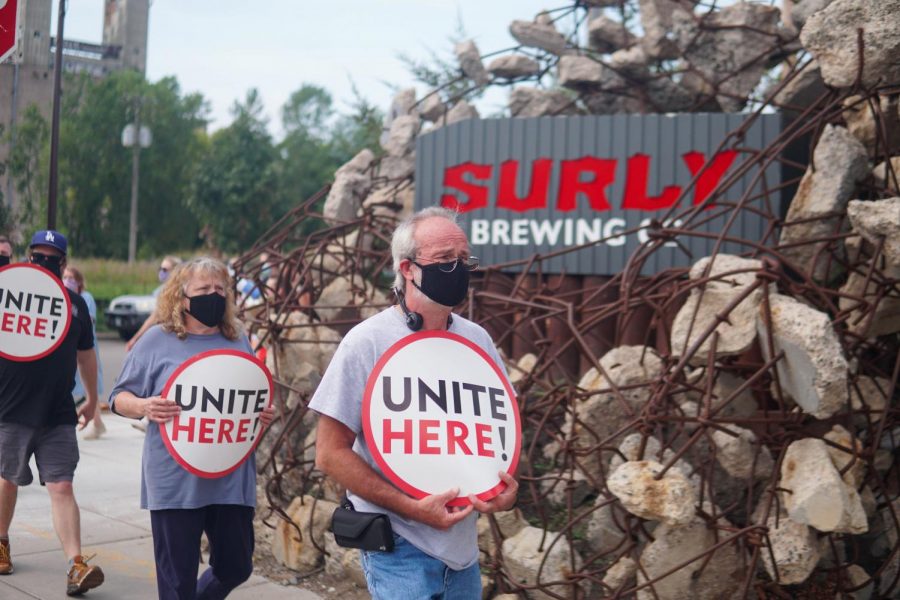 On Monday, Aug. 31, the hospitality and kitchen staff of Surly Brewing Co., founded by Omar Ansari ’92, announced their intent to unionize. Voicing their concerns over safety precautions in the workplace, compensation and health benefits, they called on Ansari and the Surly Director of Hospitality Dan Dinovis to recognize the union in a public statement.

Like millions of businesses worldwide, Surly Brewing Co. was affected by the pandemic. In March, it furloughed its hospitality staff. When the time came to reopen in June, employees raised their concerns over health and safety in their new service model. These concerns, however, were ignored by Ansari and Dinovis. Eventually, Surly management moved towards a service model that did not allow guests to order at bar areas — one of the employees’ requests. However, Surly didn’t make the change until Minneapolis mayor Jacob Frey ordered an emergency regulation on July 29.

Another issue for the workers was their compensation. Even though their hourly wage increased after the brewery’s reopening in June, employees’ net compensation decreased drastically due to a lack of tips, a worker told the Star Tribune. The workers were also misled by the administration’s move to add a 15 percent service charge, which did not translate to increased pay for employees. The service charge replaced the tip line from all bills, and it was intended for both front-of-house and back-of-house employees.

“Management has been incredibly unclear on any information surrounding the service charge,” Isabelle Rolfes wrote in an email to The Mac Weekly. Rolfes works at Surly Beer Hall and is a member of the union.

Despite the increase in hourly wage, most workers saw a decline in overall income, some as high as 50 percent. It wasn’t until management heard about potential unionizing that they offered back-of-house employees a raise, according to Rolfes.

“A raise so low it was almost insulting,” Rolfes wrote. “Surly is taking in hundreds, if not thousands of dollars a night through the service charge; however, most employee wages have fallen overall.”

Moreover, the workers do not think the service charge is fair to customers, either.

“There is very minimal genuine interactions between staff and customers. They are being asked to pay a service charge with absolutely no service.” Rolfes continued.

This isn’t the first time Surly Brewing Co. has been accused of mistreating their workers. In 2018, a group of workers started a class-action lawsuit against the company over tip-pooling, a practice where all tips collected are put into a larger pool in order to be distributed later. The lawsuit was settled, but employees believe the settlement did not improve the working conditions.

“[After the 2018 lawsuit] employees were divided into groups as they arrived at work. Management made a claim that due to the minimum wage increase [in Minneapolis in 2018], giving all hourly workers full-time benefits was no longer financially viable for the company,” Rolfes wrote.

As a result, a lot of employees could sign up for fewer shifts, around 27-29 hours per week, just under the 30-hour limit to qualify for full-time benefits, according to Rolfes.

“It felt like a punishment, rather than a last resort decision,” Rolfes wrote.

With the announcement of the new service charge in June, the management told the employees that they would provide all workers with benefits. However, according to Rolfes, as of Sept. 1, many workers remain uninsured.

Management’s initial response to the unionization was dismissive.

Sheigh Freeberg, a representative from UNITE HERE Local 17, the Twin Cities hospitality union, informed Ansari and Dinovis about the rights of the employees, and offered each of them a small card with a clear list of the workers’ rights under the law. Both of them refused to take it.

“They showed us no respect and did not take the action seriously,” Lindsey Alinder, a server and union member at Surly wrote. “It was disheartening when [Ansari] just kind of scoffed.”

On Sept. 2, the management of Surly Brewing Co. announced their decision to shut down the beer hall indefinitely, starting Nov. 2.

Regarding the unionization, management stated that they respect the decision and will continue the dialogue. This will not, however, affect the plan to close the beer hall, which they state was put in place weeks ago.

“We think the closure of the Surly beer hall and permanent lay offs of all hospitality staff is a direct response to the unionization announcement,” Natalie Newcomer, another member of the union, wrote in an email to The Mac Weekly.

When Surly announced their indefinite closure, management sent an email to all hospitality staff stating that they would be permanently laid off and that they would receive no bumping rights — they would not be able to take another employee’s job or move to a higher position in order to keep their job.

The decision to shut down the beer hall came as a shock to all.

“Seemingly no one aside from Omar had any knowledge of this closure or lay offs [sic.] until the morning of the public announcement, including the executive chefs and other chefs and management,” Newcomer wrote.

In fact, many employees were promised that they would keep their job during the winter as the beer hall would continue its take-out service, according to Newcomer.

The beer hall also hired a number of new employees in the past month, and even interviewed some on September 2, the day the unionization was announced.

“It does not make sense that they would hire people […] at the end of summer […] if they were planning to shut down for winter,” Newcomer said. “This is why we believe this was an act of union busting.”

The union is moving forward despite this recent decision. They are organizing a vote so they can be recognized by the Department of Labor. If successful, union members’ positions will be protected under the law.

“We are definitely not going to sit down and be quiet. There is a lot left to be said,” a social media post by the union read.

As a response to the shut-down, the union formed a picket line on Sept. 6. Many Surly workers, workers from other unions and even some local politicians came together to support the union. A number of Macalester alumni came out for the picket line.

“You’re not local beer if you’re not going to support your local people,” Emma Swanson ’16, who was present at the picket line said.

Macalester has a tight relationship with Surly. It is well-known that the founder, Ansari, is an alumnus. They also organize events for the college, like hosting the alumni donors from the Class of 2016 before their graduation.

Hannah Trostle ’15, who started a Facebook group for Macalester alumni in support of the union, thinks that the reason Macalester keeps a close relationship with Surly is that “[they] want to show us a successful example of an entrepreneur,” and by doing so, they “disregard the more problematic elements.”

“It would be awesome if the official alumni group released a statement in support of the workers,” Trostle said.

“Anyone who drinks Surly beer, anyone who works in a restaurant that serves Surly beer, it’s on all of us to say that it is absolutely unacceptable,” Celeste Robinson ’16 said, an employee  at a unionized restaurant in St. Paul.

“Surly and Macalester are both these really loved, respected Twin Cities things that people really put their identity on […] but if you’re exploiting your workers and not letting them unionize, then you are doing the same things as Nestlé and Coca-Cola,” Robinson said.

Ansari did not respond to requests for comment, but a spokesperson responded with the following statement on Sept. 1: “Today, some of Surly’s hospitality employees notified management of their intent to unionize. We’re working on determining the next steps in the process.”