Justin Anderson on turning trash into treasure from Hawaii to Macalester 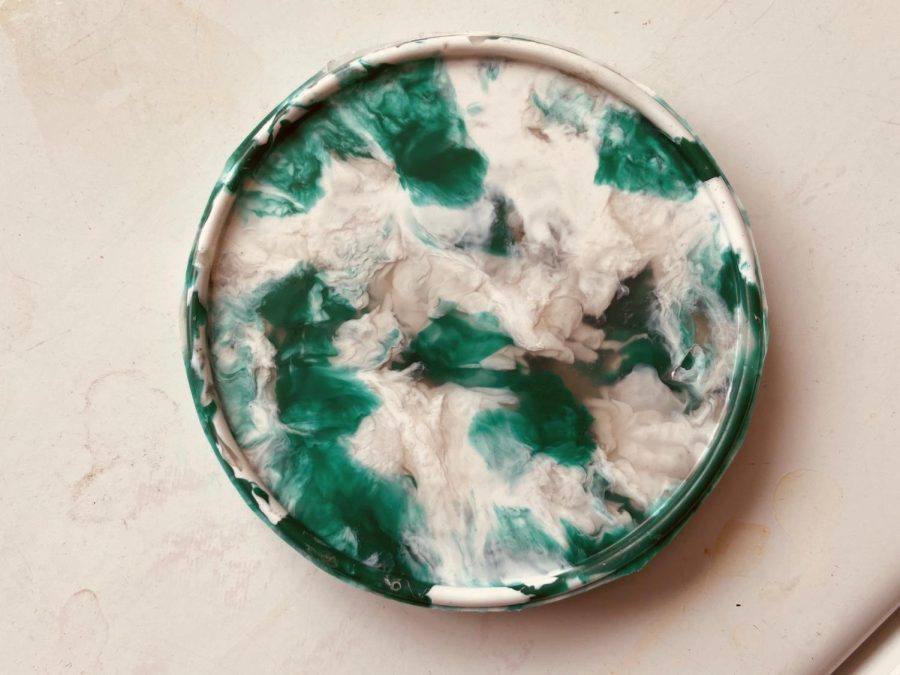 Justin Anderson ’23 makes coasters out of plastic that would otherwise be thrown away. What started as a one-time project they began while on vacation to Kauai, Hawaii, is now an ongoing initiative towards turning trash into treasure.

When Anderson was collecting bottles and cans for Hawaii’s Deposit Beverage Container Program, they heard on the news that China would no longer be accepting foreign recycling. Inspired by these new recycling regulations and the 4Ocean bracelets — a company that pulls one pound of trash from the ocean for every bracelet — Anderson decided they wanted to step up.

“I cleaned up the beach, because why wouldn’t you? It’s the right thing to do,” Anderson said. “And for some reason, I was thinking of the 4ocean bracelets and I was like ‘what if I packed all this up and brought it home and did something with it?’”

Anderson built a fume hood with their father, ordered a hotplate off of the internet and got to work. The plastic that was originally left to sit on beaches of Hawaii was chopped, melted, layered and eventually transformed into colorful recycled drink coasters. Each coaster is different than the next, varying in pattern and colors depending on the origin of the plastic used.

Anderson did not end their project once they arrived at Macalester.

“When I got to Macalester I got the idea to start collecting materials like straws, and lids and black plastics that can’t be recycled to kind of help with the zero waste by 2020,” Anderson explained. “That’s when I heard about ‘make art not waste’ and of course I had to do that.”

Anderson began picking up plastic as they walked across campus and storing it in their backpack, on the search for otherwise non-recyclable material.

Collecting and melting trash from Macalester has given Anderson an insight into the kinds of materials campus members throw away most often. Anderson said that bubble tea straws, Dunn Brothers coffee lids, apple juice drinks and Powerade caps were the most common.

According to Anderson, the easiest way for Macalester students to reduce the use of these items would be to use a reusable cup.

Anderson has also been working on plans reaching larger than the Macalester campus by partnering with local businesses.

“I was hoping to partner up with local businesses — there was a Barnes and Nobles Starbucks that agreed to give me stuff and that’s how I was able to make all of these,” Anderson said as they held up a colorful coaster.

COVID-19 has become a hurdle in the recycling project, but one that Anderson is working around.

“With COVID-19, there is obviously a health risk involved and [local businesses] can’t just save stuff for you anymore,” Anderson said. “Same thing with on-campus — they told me to get rid of the collection bins.”

Anderson has worked around these obstacles by using some of the waste from their own house, as well as beach plastic they collected in Duluth, MN, to continue making coasters. These limitations have not stopped Anderson from thinking about where they hope to take their project.

“I’ve got to be a geologist first, but I also envision having my own recycling center that takes stuff and produces these as an actual recycling carrier,” they said. “I don’t want to just do coasters… I want to do this on a larger scale.”

Anderson believes that the purpose of recycling is commonly misunderstood, and wants Macalester students to reconsider their relationship with plastic waste.

“Recycling is important because people really don’t give the value to their stuff they should — it’s like a substance that can be made into a thing, why are we just tossing that out?” Anderson said.

“Going back to zero waste by 2020, we are doing good on campus to get rid of all the plastic items in Cafe Mac and catering,” they said. “But people are still going to the city and getting all these straws and lids and that’s still contributing to the waste, so I feel like there is a gap missing there.”

Anderson was awarded the Taco Bell Live Más Scholarship for their creativity and innovation of turning otherwise non-recyclable trash into functional pieces of artwork.

Looking forward, Anderson plans on continuing their projects, expanding campus involvement and perhaps even starting an upcycling organization at Macalester. They hope that, in the future, Macalester students are more thoughtful of how they use their resources.

Anderson’s coasters are available on their website linked below.