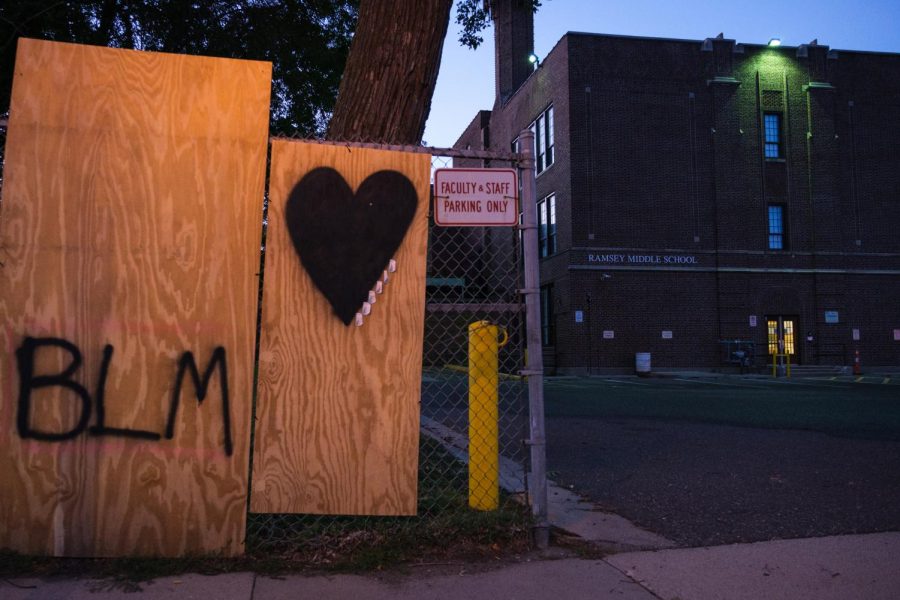 BLM signs outside of Ramsey Middle School. While the school is part of SPPS, there are currently no SROs stationed there. Photo by Kori Suzuki '21

The Saint Paul Public School (SPPS) board of directors voted 5-1 to terminate its contract with the Saint Paul Police Department (SPPD) Tuesday night, ending $775,000 of funding for seven police officers stationed at district schools by the end of the month.

The motion also included a commitment to developing an interim safety program to replace these School Resource Officers (SRO) by August and creating a district-wide “school climate and safety implementation committee” to oversee future safety initiatives.

Director Steve Marchese, who introduced the motion, emphasized that any groups or committees handling the implementation of these initiatives will include teachers, students, building staff, administrators and school board directors.

The motion immediately received vocal support from a majority of the board, some of whom helped craft its language.

“I do not believe… that we should have police officers in our schools,” Director Zuki Ellis said. “What I would like to see is how we go forward differently. That is the opportunity that we have. And I’m not going to lie — I think that’s scary and exciting and a huge opportunity.”

“This has been a long time coming,” Director Chauntyll Allen said. “In order for all our students to achieve, they need to be free of trauma.”

SPPS students have been advocating for the removal of SROs from their schools for years. In 2016, they confronted former Mayor Chris Coleman on the issue after a Black former student was arrested for trespassing on school property. Video of the arrest, which showed the officer kneeling on the student’s back as he cried out for help, went viral.

Ahead of the vote, students of color led a demonstration calling for the board of directors to end the district’s relationship with police on Monday afternoon. The demonstration began at Central High School and became a caravan that drove to the homes of several school board members.

Directors said that both these demonstrations and thousands of emails from constituents had influenced their decision, but called on members of the community to partner with the board moving forward.

“If this was worthwhile enough for you to come and speak in front of my house, I believe it’s also worthwhile for you to roll up your sleeves tomorrow and talk about how you will help us in our buildings and contribute what you can to make… our building community different,” Marchese said. “That’s where the real work starts.”

Members of the board also credited the leadership in surrounding districts, including Minneapolis Public Schools and Winona Area Public Schools, which both ended their SRO programs following the murder of George Floyd.

“Divestment away from the police is an investment in Black lives,” Allen said. “I ask that we continue to put in this work, put our brilliant minds to work and think about what safety means for all of our students and for everybody in the building.”

Director John Broderick was the only member of the board to vote against the measure, citing his personal relationship with the SPPD.

“I’ve always benefited in my personal life from relationships with people in the Saint Paul Police Department,” Broderick said. “I think at this critical time in the history of this country and in the history of Saint Paul in particular… we can accommodate the SRO officers that for the most part… we have been satisfied with.”

At the onset of the meeting, SPPS Superintendent Joe Gothard announced that, regardless of the board’s vote, the district’s relationship with SPPD will continue in some capacity. He said there will still be times officers will be called to the schools despite no longer being stationed inside them.