Who will rebuild Minneapolis? 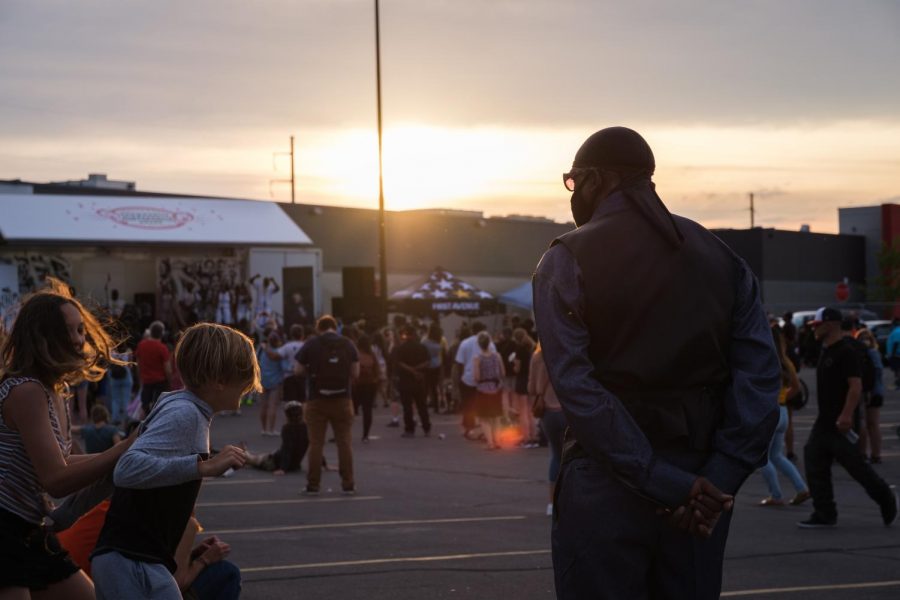 People from across the Twin Cities congregated at the corner of Lake and Minnehaha to celebrate Juneteenth. Photo bu Kori Suzuki '21.

On Friday night, Juneteenth, people from across the Twin Cities descended on the intersection of Lake Street and Minnehaha Ave. to celebrate, commemorate and look toward the future.

It was here at this very intersection on the Thursday following the murder of George Floyd that thousands of protesters overran and set fire to the Minneapolis Police Department’s third precinct — a watershed moment in an uprising that was expanding across the country.

An Associated Press photograph of a protester carrying an upside-down American flag down Minnehaha Ave. past a blazing liquor store that night became one of the most iconic early images of the movement.

On Juneteenth, the liquor store ruins had become a magnet for amateur photographers. Many were greeted by a small bright blue sheet of paper stapled to a charred brick column on the Lake Street side of the building that read “Just browsing? Consider donating.”

A similar sign stapled to a sign pole on the Minnehaha Ave. side of the building read simply, “It’s Not Over” and included a link to Reclaim the Block’s list of organizations to donate to.

The signs spoke loudly. The fight for racial justice is not over by any stretch, and the effects of the uprising in the Twin Cities are still reverberating.

Nevertheless, Lake and Minnehaha on Friday night felt like uneven ground — full of people who participated in a paradigm-shifting event together now pursuing slightly divergent paths forward, trying to figure out how to shape the movement to rebuild the city.

On Friday night, the physical landscape, and the different events that spread across it, made that clear.

In a large Target parking lot, a group of organizations hosted an inaugural Juneteenth celebration complete with live music, food trucks, merchandise sales and a donation site. Some were there to raise money for the NAACP and Black Lives Matter. Others were there to support their businesses.

Just down Minnehaha Ave., in the lot next to Moon Palace Books, people joined winding lines stretching back to the street to get a graphic of the burning third precinct and the words “Welcome to Minneapolis” screen printed onto t-shirts.

Still other people, many of them carrying cameras, walked through the area marveling at and documenting the scores of buildings reduced to rubble in the aftermath of Floyd’s murder.

Each group of people, each event, had similar hopes but slightly different approaches — on everything from the police to corporations to where resources should be devoted.

The screen printing event, for instance, despite its location just feet from Lake Street, directed its fundraising elsewhere: raising money for a fund dedicated to rebuilding black-owned businesses in North Minneapolis.

“I live in South Minneapolis,” organizer Emma Crutcher said. “We’re going to bounce back. Obviously. In North Minneapolis, those are historic, black-owned businesses, historic buildings, and we should be raising money for them.”

Crutcher noted that a fund dedicated to rebuilding Lake Street has already raised in excess of $6 million — with considerable corporate support — and will begin to distribute grants soon. The North Minneapolis fundraising effort has been less successful.

“The North Minneapolis fund is currently right around $2 million — and I think it’s really unequal that the Lake Street fund has corporate donors and has raised so much more money when… all of the [Northside] businesses that were destroyed are local, Black-owned businesses,” Crutcher said.

The Juneteenth celebration down the block had a more diverse crowd, but a more corporate backdrop — one that drew skepticism from a number of passersby.

Target, which saw clashes and looting at its locations across the Twin Cities two weeks ago, hung a banner from its store just above the stage which read “We’ll stand together. And we’ll build together.”

James Everett, a former president of the Minneapolis NAACP and candidate for governor, helped to organize the celebration. He said that, despite Target’s ugly history in his home North Minneapolis, the sign’s presence did not bother him.

“Do I trust Target? Not necessarily,” he said. “Do I think that Target is a foundational piece of this? No. But, at the same time, I think they hit the bullseye with that sign.”

It wasn’t just the Target sign that courted controversy. The evening before, a heated debate erupted on the event’s Facebook page over the role that Minneapolis police officers were playing in training security for the event.

Everett said that while organizers did coordinate with the police department, the coordination was to ensure that there wouldn’t be any police presence on site. Community members would provide event security, police would provide backup.

“The coordination was making them aware that we would be doing our own thing,” he said. “But also that they’re on standby if we have to call. We have a community engagement officer that we can contact.

“If we want people to trust our leadership, we have to show examples of it,” he continued.

That was Everett’s take. It was not the equivalent of a shirt with the burning third precinct on it. But it was not completely divorced from it either.

Beverly Hammond, a government worker and resident of Maple Grove, Minn., was one of the people taking in the sights. She stopped at a colorful mural on the facade of The Hook and Ladder Theater & Lounge in between the Target lot and Moon Palace Books.

Hammond spent a portion of her childhood in Baltimore and was living there during the Freddie Gray protests in 2015. She said that these protests, this movement, felt more promising than that one.

“One thing I like about Minnesota is the coalition-ism,” she said. “We had pockets of that in Baltimore, but I think people tried to speak up and didn’t get heard… there wasn’t as much rallying and support from people other than Black people.”

That coalition-ism is going to be key going forward if the radicalism of the last several weeks is to hold and sustain itself.

Crutcher, observing the screen printing process, acknowledged that there has been a slowdown of mutual aid donations of late. But she remains confident about the movement’s ability to sustain itself in the coming months.

“I firmly believe that the people will have the ultimate control over rebuilding,” Crutcher said. “Minneapolis Parks becoming sanctuaries happened because… the people, us, put pressure on the city of Minneapolis [and] on the parks department.”

That pressure may not draw as many eyeballs now as it did several weeks ago. But it is having an impact.

“But what people don’t see in other parts of the country is all of the mutual aid funds, all of the food hubs, all of the stuff that we have been doing that is completely grassroots in the city to support each other,” she continued. “And it’s not stopping. It’s not going to stop any time soon.

“For those of us who live here, we are going to be doing this for the rest of our lives.”