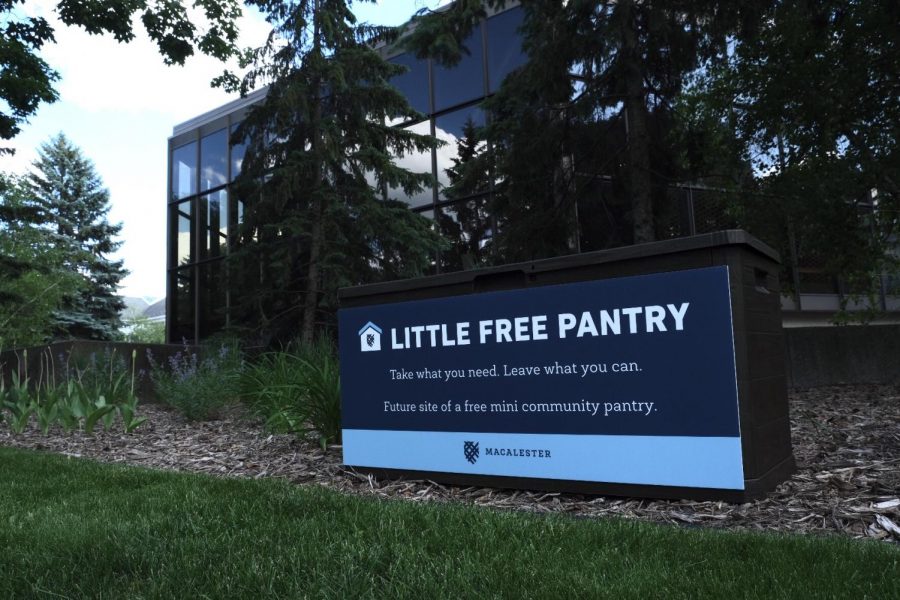 The temporary structure is a large, weatherproof box nestled into the landscaping next to the sidewalk on Grand Ave. The bright blue sign on the side bears the project’s motto “Take what you need. Leave what you can.”

The initiative, led by College Chaplain Kelly Stone, began officially on Thursday, June 11 as a response to one of the requests put forth by the Black Liberation Affairs Committee (BLAC) in a meeting with senior staff last week.

When Dr. Rivera tasked her with the project, Stone was immediately reminded of a conversation she had with an alumnus months ago who proposed the idea of a Little Free Pantry — a lesser-known spinoff of the Little Free Library concept.

While the idea isn’t yet popular in the Twin Cities, there are hundreds of Little Free Pantries across the country.

Macalester’s location will be an open place for members of the community to leave non-perishable donations and a chest of resources for that same community to tap into if they find themselves in a position of need.

As of now, the Little Free Pantry is not affiliated with Macalester’s Open Pantry, which is specifically dedicated to students in need. This project is for people both inside and outside of the campus community — available to anyone who happens to walk by.

While Stone hopes the whole neighborhood can contribute to the project, the program will be overseen by Macalester. The college paid for the first load of groceries.

It’s also paying for a carpenter to build a more rugged structure: a stilted box with a sloped roof, designed to better withstand snowy Minnesota winters. Sometime in the next three weeks, facilities staff will install the permanent pantry.

Members of the campus community will also be responsible for upkeep. Every Monday, Wednesday and Friday, Stone is inviting campus departments, offices and individuals to be stewards of the Little Free Pantry. The volunteers will check the inventory, pull out any expired items and refill it if the supply is running low.

Stewards have already volunteered for every shift through Aug. 31 — among them the Macalester Fund, Admissions, the Civic Engagement Center and numerous academic departments. So far, Stone has been receiving a lot of positive feedback from members of faculty and staff.

“People have said, ‘This feels like a tangible invitation into something that I can do. And given COVID concerns, I haven’t felt like I’ve been able to step into the community around a lot of people,’” Stone said. “It’s been heartening to hear that.”

The pandemic has been on Stone’s mind throughout the Little Free Pantry’s development. With the campus approaching nearly three months of shutdown, sites for a community pantry were limited. Plus, she needed to implement a smaller-scale project that could be kept by just one or two volunteers at a time.

For Stone, the Little Free Pantry was the ideal compromise.

While other donation sites in the area may be better-stocked or more highly-trafficked, Stone understood the request for a pantry as a call for Macalester to “make some of the pain of the human family more visible.”

Her hope is that through partnering with neighbors, Macalester can be a part of that normalizing process. In the future, Stone would love to find ways to include locally-grown produce, perhaps even from the college’s own mulch garden, though those plans are still a ways out.

Macalester rolled the Little Free Pantry out quickly, with the pilot box opening up just over a week after they received the initial request. For now, Stone said that they’re largely “building the plane as we fly it,” and taking suggestions as they come.

“It’s a small scale, we know that,” Stone said. “It does feel like a start point for us to understand that this isn’t someone else’s problem, this is our problem to begin to address.”