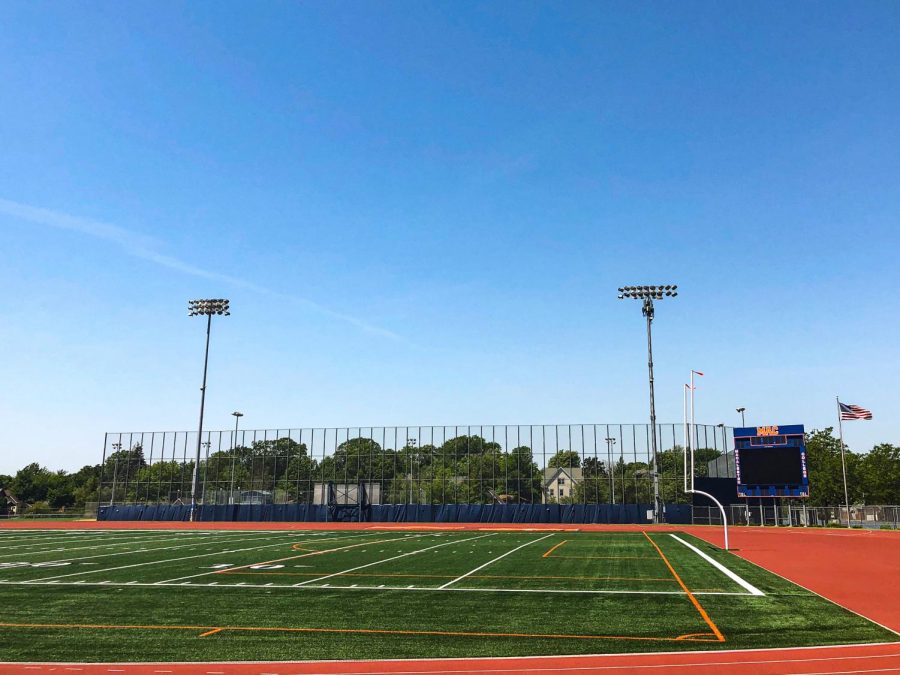 The football field at Macalester. Photo by Lily Denehy '22.

On May 27, Macalester Athletics announced that the college’s football team would leave the Midwest Conference (MWC) after the 2020 season and return to the Minnesota Intercollegiate Athletic Conference (MIAC) in fall 2021. The College of St. Scholastica will also join the MIAC in 2021.

In 1920, Macalester was one of the founding members of the MIAC where they played until 2001. That year, the football team left to be an independent program after posting a losing record every year between 1986 and 2001.

While the early 2000s posed funding, recruitment and competition challenges for the team, by the early 2010s the rosters had stabilized and funding was secure. Then, in 2014, Macalester joined the MWC, won the conference championship with a 9-2 record and traveled to the NCAA Division III football playoffs.

“Football was always the outsider because we were never in the MIAC for my tenure — which most of the sports teams at Macalester were in the MIAC,” captain and linebacker Sam Jakshtis ’21 said. “It’s not only unifying with the Macalester community but also unifying in the broader Minnesota [college] community.”

Since the 2014 season, Head Coach Tony Jennison has had a fairly stable 70-person roster, regularly recruiting upwards of 20 players in each first-year class and the program has had its overall best decade in school history.

But last year, the MWC voted to not renew Macalester’s membership, leading to uncertainty about whether the team would become independent again or rejoin with the MIAC.

Geographically Macalester is the exception in the MWC. The conference is made up of schools from Illinois, Iowa and Wisconsin, and Macalester was the lone football team from Minnesota.

Macalester’s roster size, consistently in the 70s, also made it an outlier in the conference. With St. Norbert’s departure from the MWC, a top team from the North division, Brooks said the conference might have preferred to keep the numbers even.

“I think it may have been easier for them to move on,” Brooks said. “But I don’t really know why.”.

The decision to return to the MIAC comes after the MIAC announced the removal of the University of St. Thomas from the conference in May 2019. St. Thomas had won the last twelve of the conference’s all-sport trophies. Macalester and St. Scholastica joining the MIAC could be part of a plan to stabilize MIAC football and the conference.

“I think in an effort to strengthen our conference, the presidents were not only focused on new membership, but they were focused on football and so I think I’d say a year or so I think this has probably been in the works,” Brooks said. “But I don’t think it became serious for Macalester until the Midwest Conference voted to not renew our contract.”

The MIAC was open to Macalester football returning, and after finding years of success in the MWC, the college was ready to take the plunge as well.

“We’re more competitive than when we left,” Athletic Director Donnie Brooks said. “I think the timing and the strength of the program and returning in a position of power was also a really important factor in us deciding to come back.”

Now, both players and Jennison are looking forward to the new challenge of returning to the MIAC. Even with St. Thomas leaving the conference in 2021, there are still two top-25 ranked teams — Bethel University and St. John’s University — in the MIAC. In April, the Jacksonville Jaguars drafted St. John’s offensive lineman Ben Bartch in the fourth round — making him the first Division III draftee in five years.

As compared to the MWC, the MIAC is definitely a step up in competition. There are also more opportunities for building relationships with other Twin Cities football programs and utilizing the name recognition of the MIAC for recruiting.

“I think everyone is really excited,” Jakshtis said. “Not only because there’s new challenges but there’s also new opportunities… There’s a lot of good things that can come from being in the MIAC. I don’t know necessarily what that can entail but I think it’s just a lot more opportunities than just staying in the Midwest Conference.”

“I certainly say moving to the MIAC in 2021 is a great move for the college and a great move for the team,” captain and offensive lineman Carter Gale ’21 added. “I feel like it’s an honor to be in the MIAC again and competing in one of the most competitive football conferences in Division III.”

The rest of the MIAC is made up of schools in the Twin Cities area like Concordia University, St. Olaf College and Augsburg University, with St. Scholastica in Duluth being the farthest. Some teams like Carleton College and Hamline University already have established rivalries with Macalester, while others in the conference Macalester hasn’t faced in years.

Macalester and the other football teams in the MIAC will be split into two divisions — the Skyline and Northwoods divisions. Macalester will play in the Skyline division with Augsburg, Bethel, Concordia and Hamline. They will also have three “crossover” games against schools from the Northwoods division. In 2021, those games will be against St. Scholastica, St. Olaf and Carleton.

After the seven weeks of divisional and crossover play, the MIAC will hold a championship bowl week — similar to the bowl week held by NCAA Division I football. During bowl week, the top seeded teams in each division will play each other for the divisional title and automatic bid to the NCAA playoffs.

For Brooks, whether the team is playing in the MWC or any other conference, the goal is the same.

“We had a discussion last year when we told the team the Midwest Conference voted us out and we said in that meeting, we don’t know where we’re gonna land,” Brooks said. “But the goal is to win a Midwest Conference championship before we leave, and to go in and win a championship in the next league that we go to, and everybody seemed on board with that.”

Jakshtis too, emphasized that he hoped the team would continue to win, but also maintain it’s community service elements and commitment to doing the best off the field in the move to the MIAC.

“I kind of went in not really with the same community-oriented aspect as I’m coming out with and that’s definitely because of the culture,” he said. “Just saying, okay we’re a football team but what good can we do because of what platforms we have? So I really hope that kind of a culture is able to carry through.”

Despite the uncertainty surrounding the next season due to COVID-19, which has forced the traditional spring practices and meetings to be held over Zoom, the Scots are still excited about the upcoming season. They have high hopes for their final season in the MWC — a championship. It would be the second MWC Championship in school history.

“Every year that’s gotta be our goal,” quarterback Grady Munro ’22 said. “Our goal going into the season is we want to win it all, we want to win the conference. And I think this next year, since it’s our last year, it’s motivating us even more that we really want to go out with a bang.”