Minneapolis labor steps up for justice for George Floyd 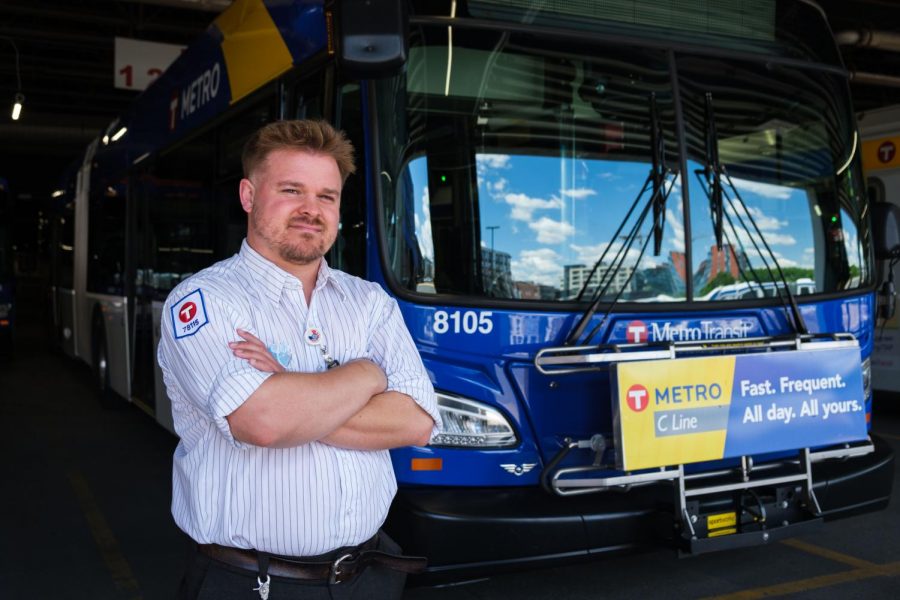 Adam Burch had an idea of what was coming.

In 2016, while demonstrating on I-94 after the murder of Philando Castile, Burch and a number of other demonstrators were arrested and transported to jail on a Metro Transit city bus.

Nearly four years later, Burch was himself working as a Metro Transit bus driver as militant protests broke out across Minneapolis and St. Paul following the murder of George Floyd.

On the night of Tuesday, May 26, protesters tried to overrun the Minneapolis Police Department’s third precinct on Minnehaha Ave. The protests were set to continue the next night, and the city of Minneapolis wanted to be prepared to make mass arrests.

“Whenever any police department in the Twin Cities wants to make mass arrests, they essentially lean on Metro Transit to provide them with buses to haul civil disobedient protesters to jail,” Burch said. “They don’t have the transport vehicles to do that.”

Sure enough, at around 5 p.m. on Wednesday, Metro Transit drivers received a message that they would have the opportunity to do overtime work transporting arrestees and police around the third precinct that night.

Burch, a member of the Amalgamated Transit Union (ATU) Local 1005, saw the message — and began to organize.

Within several hours, he posted to Facebook that “As a transit worker and union member I refuse to transport my class and radical youth to jail… I will encourage and try to convince all my coworkers and fellow union members to also refuse to assist MPD sending protesters to jail.”

The post was shared more than 600 times. Burch said that while a couple of drivers did work with the police department that night, the majority of his colleagues were “uncomfortable” with either transporting protesters or going near the protest zone at all.

The following day, Local 1005 published a statement of support for the protesters — while ATU President John Costa announced that the national union backed Minneapolis drivers refusing to work with the police.

“Minneapolis bus drivers — our members — have the right to refuse the dangerous duty of transporting police to protests and arrested demonstrators away from these communities where many of these drivers live,” Costa said. “This is a misuse of public transit.”

Burch, meanwhile, continued to organize. Around midday on Thursday, he began to circulate a petition titled “Union Members for #JusticeForGeorgeFloyd,” calling on signatories to “ensure our labor is not used to help the Minneapolis Police Department shut down calls for justice.”

It isn’t just the Local 1005. Transit workers in other cities, including New York, Philadelphia and San Francisco, have also refused to transport protesters to jail or work with their local police department. One driver in Brooklyn walked off of his bus in front of police officers in protest.

“I was really excited to see that,” Burch said. “It just shows that all it takes is for a section of the workforce to stand up and take a position, and that builds confidence among other workers to do the same thing.”

Indeed, around Minneapolis and beyond over the last three weeks, there has been an outpouring of labor and union support for the uprising against police brutality and systemic racism.

Tyler Vasseur is a letter carrier for the United States Postal Service. When the post office on Lake Street burned during the first week of protests, his work life became closely intertwined with the uprising too.

“It was sad,” Vasseur said. “At first I was like ‘oh no, not the post office.’ But we need to be absolutely clear: we can rebuild a post office. We cannot reclaim a human life.”

Vasseur and other members of the National Association of Letter Carriers and American Postal Workers Union responded accordingly, holding a press conference last week outside of the burned post office and then led a march to the memorial site at 38th and Chicago.

Workers in smaller capacities have taken stands as well. Maddy Olson ’17, who works at the Wedge Community Co-op on Lyndale Ave., organized a nine-minute walkout on Friday, June 5.

“I think it [was] a way for us to bring attention to us in the community in a way that us as workers are taking ownership for what we want to say,” Olson said. “As gorceris workers for a co-op that says it is a community co-op, we need to demand justice for George Floyd.”

These grassroots labor leaders see this moment not just as an opportunity to express their solidarity with the movement for justice for George Floyd, but a chance to define the new labor movement more broadly.

Vasseur, for one, made clear that he does not see a place in the movement for police — who he said are “giving unions a terrible name.”

“We want to make clear to Minneapolis, the Twin Cities, the country and the world, that the genuine labor movement stands for making a better world for all — not for what we’re seeing out of [President of the Police Officers Federation of Minneapolis] Bob Kroll,” he said.

But the questions facing the labor movement go beyond police, just as the scope of the national uprising does.

“The labor movement has historically been used to [help organize] broader social movements, and since it has been on the defensive in recent history has kind of lost this tradition,” Burch said. “A section of us want to bring that tradition back and fight for the entire working class.”

Olson was of a similar mind.

“All of these things are connected,” she said. “When workers win gains, that affects everyone — black workers, LGBTQ workers, women, POC — it’s one of those things where we all rise together. It’s labor’s role to identify that.”