Christopher Columbus and the erasure of history 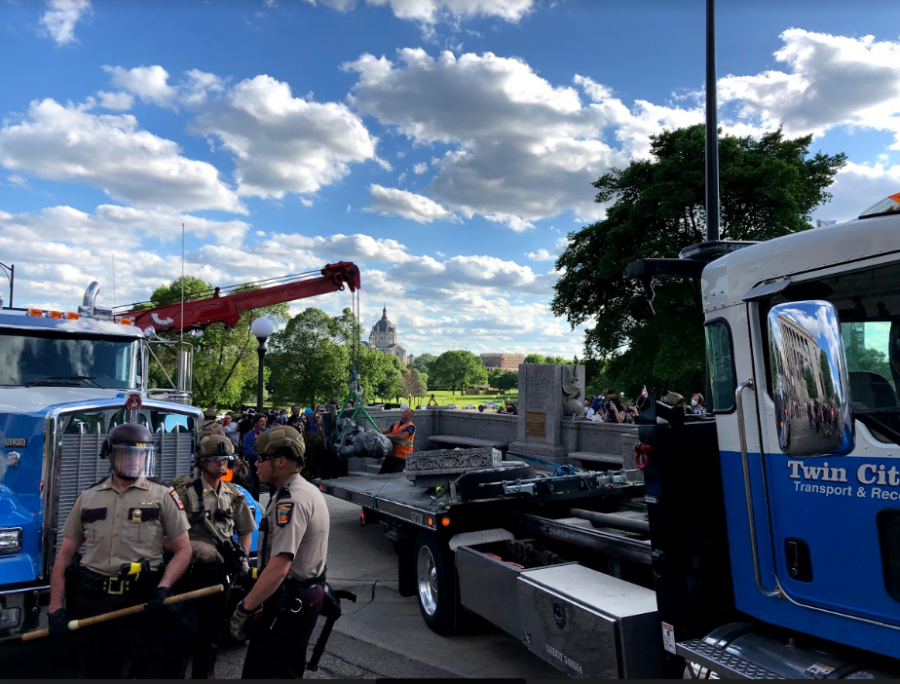 Workers from the Twin Cities Transport & Recovery company load the Christopher Columbus statue onto the back of a truck. Photo by Liam McMahon '20.

The statue of Christopher Columbus lay facedown outside of the Minnesota State Capitol, with remnants of his once-perfect nose ground to dust on the sidewalk around his face.

Around him, Indigenous activists from the American Indian Movement (AIM) and allies cheered, danced and sang. They had just taken the statue down, accomplishing something in moments that the legal process had failed to do for years.

When AIM activist Mike Forcia spoke with Eric Roeske, a Minnesota State Patrol captain, shortly before tearing down the statue, Forcia said that this act “was an extension of” the protests across Minneapolis/Saint Paul (MSP) as well as the rest of the country in the wake of the police murders of George Floyd and Breonna Taylor.

He’s right. These protests, ignited by Floyd’s murder at the hands of four Minneapolis Police Department officers, are about more than police brutality. They are also about the white supremacy baked into the DNA of the United States, which rears its head not just in the violent policing of Black, Indigenous, People of Color (BIPOC), but also in access to healthcare, education, jobs, the accumulation of wealth and so much more.

Protesters across the United States have defaced and torn down statues and monuments to Confederate generals and soldiers from Indiana to Virginia. They took the head off of Columbus in Boston before bringing him down in Saint Paul.

Who was Christopher Columbus, and why do we celebrate Columbus Day?

As the old rhyme goes, in the year 1492, Columbus sailed the ocean blue. On a commission from the King and Queen of Spain, Columbus was directed to find a sea route west from Europe that would take him to India and its riches of gold and spices. In all likelihood, Columbus and his crew never would have made it to India, even if they had known how to get there.

Instead, they ended up in the Bahamas — largely by accident.

The crew continued on to Cuba and what is now Haiti, imprisoning Indigenous peoples along the way as they searched for gold. Columbus promised to bring back to the King and Queen of Spain “as much gold as they need… and as many slaves as they ask.” The Royal Court sent more ships and more men, believing Columbus’ claims that gold was bountiful in what he thought were islands off the coast of China.

In reality, there was very little gold.

As historian Howard Zinn detailed in the first chapter of his “A People’s History of the United States,” Columbus and his men enslaved thousands of Indigenous people, intending to take them back to Spain. Many died, either from disease brought by the colonizers or on the journey to Europe.

Needing to find the gold that did not exist, Columbus “ordered all persons fourteen years or older to collect a certain quantity of gold every three months. When they brought it, they were given copper tokens to hang around their necks. Indians found without a copper token had their hands cut off and bled to death. The Indians had been given an impossible task. The only gold around was bits of dust garnered from the streams. So they fled, were hunted down with dogs, and were killed,” Zinn wrote.

The Arawaks, the Indigenous people in what is now Haiti, resisted. Yet, they soon realized they could not defeat the Spanish militarily, and many died by suicide before they could be killed by the colonizers.

“Infants were killed to save them from the Spaniards. In two years, through murder, mutilation, or suicide, half of the 250,000 Indians on Haiti were dead,” Zinn wrote.

As Zinn describes, what Columbus and the Spaniards did to the Arawaks was genocide. So was the future violence directed against Indigenous peoples across the Americas.

Columbus’ inability to find gold or bring a sufficient number of slaves back to Spain did not endear him to the Spanish court, and he was not viewed as anything resembling a hero until after his death.

There were small celebrations in the early U.S. to celebrate the Columbian arrival in the new world in the 1790s, organized by the Tammany Society, but the myth of Columbus in the U.S. was not created until much later.

In the 1850s and 60s, hundreds of thousands of Irish people fled the potato blight, immigrating to the U.S. There, they faced rampant xenophobia and nativist sentiment, as well as job and housing discrimination. Many of these new immigrants organized into groups and societies, including the Knights of Columbus, a Catholic fraternal organization formed in 1881.

They took their name from Christopher Columbus, the Catholic man who had supposedly discovered the new world.

“Columbus played a leading role in making citizens out of these immigrants,” anthropologist Michel-Rolph Trouillot wrote in “Silencing the Past: Power and the Production of History.”

“He provided them with a public example of Catholic devotion and civic virtue, and thus a powerful rejoinder to the cliché that allegiance to Rome pre-empted the Catholics’ attachment to the United States.”

The Knights began to organize parades and celebrations on October 12, the day of Columbus’ landing in the so-called new world. Columbus, originally from Italy, was also claimed by the small but growing number of Italian immigrants to the U.S.

Italians and other southern European immigrants also faced xenophobia on arrival in the U.S. and were not viewed as “white” by many white Americans. In the late 19th and early 20th centuries, that distinction was incredibly important, because to be white in the U.S. opened the pathway to citizenship and all of the rights and privileges it conferred. As more Italian immigrants began to arrive, the myth of Columbus provided a path toward whiteness, and therefore citizenship.

In Minnesota, where there were relatively few Italian-Americans, that pathway was important. Many of the state’s Italian immigrants moved to the Iron Range, where they faced rampant discrimination.

Anti-immigrant and anti-Black sentiment in the U.S. rose after the end of the first World War, culminating in the re-emergence of the Ku Klux Klan and domestic terrorism directed against Black Americans, as well as the passage of the Immigration Act of 1924. The Act made it all but impossible to immigrate from any Asian country and put strict quotas on the number of southern European immigrants allowed to enter the U.S.

“It was in the wake of the 1924 Act that the Italian-Americans of Minnesota conceived of a Christopher Columbus Memorial,” historians Peter DeCarlo and Mattie Harper wrote in a 2018 MinnPost article.

Over the next seven years, different Italian-American civil society groups organized, lobbied and raised the money to put a statue of Columbus up on the grounds of the State Capitol. In 1931, they did, in a ceremony that brought out tens of thousands of people from across the midwest.

“The federal and state governments fully embraced the memorial and helped to craft its meaning,” DeCarlo and Harper wrote. “Gov. Floyd B. Olson and other dignitaries spoke from a platform erected on the steps of the historical society building. President Hoover sent a telegram lauding Columbus.”

Columbus’ statue bore a plaque, which read “To Christopher Columbus, discoverer of America.”

That language erased the Indigenous peoples here before 1492, as well as those still in Minnesota and across the U.S. forced onto reservations by the violent settler-colonization of the country. At the same time, according to DeCarlo and Harper, “it affirmed Italians’ place in the nation’s history.”

Many states across the U.S. celebrated Columbus Day on the second Monday in October. It became a federal holiday in 1971.

Calls for change and the re-evaluation of Columbus

While Indigenous peoples and other members of marginalized groups across the U.S. and the Americas have long known the true history of Columbus, rather than the mythic one, that understanding began to permeate white society in 1992, the 500th anniversary of Columbus’ arrival in the Bahamas. The U.S. Government, as well as Spain and others across the Americas had planned massive commemorations of the 500th anniversary of Columbus’ arrival. Corporations planned Columbus Day sales and marketing campaigns. In the face of protest, many of those plans were scrapped. Yet, Columbus Day continues to be a federal holiday in the U.S.

Notions of celebrating Indigenous people, rather than Columbus, on Columbus Day began in the 1970s, and the first public celebration of Indigenous Peoples’ Day occurred in Berkeley, California in 1992.

In Minnesota, the governments of Saint Paul and Minneapolis, as well as Grand Rapids and Grand Marais, adopted Indigenous Peoples’ Day in 2014. The State of Minnesota followed suit in 2016.

Despite that progress, Columbus remained on the steps of the Capitol.

In 2015, Indigenous activists protested the statue, and Indigenous members of the state legislature called for its removal.

That same year, the legislature debated a bill to change the language on the statue from “To Christopher Columbus, discoverer of America,” to “To Christopher Columbus, landed in America.” While more historically accurate, the change still erased the Indigenous peoples violently displaced across the Americas, and in Minnesota, where the State Capitol sits on Dakota land.

Two years later, a petition circulated by community organizer Wintana Melekin called on Governor Mark Dayton to take down the statue of Columbus and replace it with one chosen by Indigenous community members, as well as one of Prince.

None of these efforts succeeded. So, activists decided to do it themselves.

“I spoke with some elders, and they said, ‘Nah. You don’t wait for the process no more. It’s been done. You go down and you take it down,’” Forcia said on Wednesday evening.

Take it down they did.

On Wednesday night, Minnesota Lieutenant Governor Peggy Flanagan, an enrolled member of the White Earth Band of Ojibwe, penned a Facebook post about the statue’s removal.

“[The statue] was a constant reminder that our systems were not built by or for Native people or People of Color, but in many cases, to exclude, erase, and eliminate us,” she wrote.

“Tonight, I’m thinking of all the Native children who might now feel more welcome on the grounds and in the halls of their state government.”