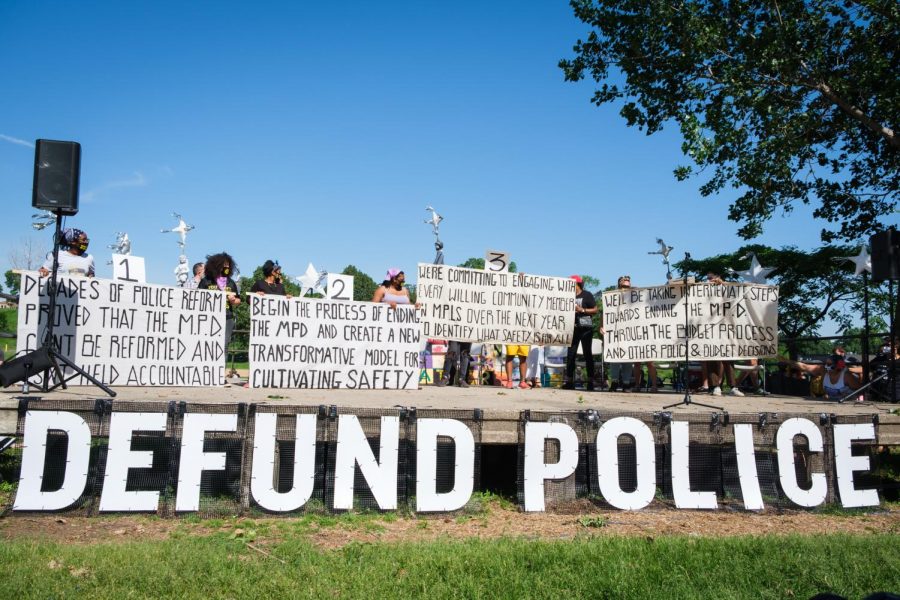 People poured into Powderhorn Park to meet with city councilors face-to-face about the reformation of the MPD in June 2020. Photo by Kori Suzuki '21.

*Private figures photographed without explicit consent have had their faces obscured.
On a hot, clear Sunday afternoon in June, people poured into Powderhorn Park in South Minneapolis for what was being billed as a face-to-face with city councilors of dramatic import.

It was also Prince’s birthday, and CJ Gronner came ready to mark the occasion — decked out in a purple Minnesota Twins jersey with the late singer’s name and iconic symbol in the back.

Gronner was born and raised in the Twin Cities, but moved away 25 years ago and now lives in Los Angeles. Several months ago, though, at the onset of the coronavirus pandemic, she came back to her childhood home to care for her wheelchair-bound mother.

After George Floyd was murdered facedown on the pavement calling for his own mother, Gronner found herself on a different mission. She took her mother to visit the memorial at 38th and Chicago Ave. She was standing on I-35 when a truck barreled towards her and other protesters.

And on Sunday, she sat in the grass just feet from Rep. Ilhan Omar and members of Omar’s family, in a decidedly celebratory mood.

“I don’t think it’s a coincidence that his band was called The Revolution,” Gronner said. “I sort of feel like maybe that dude had an idea that [this] would start here.”

Indeed, people are talking openly about revolution in Minneapolis, where, on Sunday, nine of the 13 members of the city council took the stage to announce their commitment to disbanding the Minneapolis Police Department.

The coalition doesn’t yet have a concrete plan for abolition. But their rhetoric left little to argue with.

“Our efforts at incremental reform have failed,” City Council President Lisa Bender said. “Period. Our commitment is to end our city’s toxic relationship with the Minneapolis Police Department. To end policing as we know it.”

End policing as we know it. That’s what a veto-proof majority of the Minneapolis city council pledged to do, standing on a platform fronted by large white letters spelling out “DEFUND POLICE,” with a crowd in the thousands roaring them on.

“I think a lot of people find Minneapolis an unlikely place for this to happen,” Gronner said. “At the beginning of this, there were people who were like, ‘Oh my gosh, I’m so embarrassed that this is happening in Minneapolis. My god, it’s such a nightmare.’”

You might know someone like this. Minneapolis Mayor Jacob Frey, humiliated by activists outside of his home on Saturday, is one of those people. He called the week of Floyd’s death the “worst of his life,” and one of the “worst in the history of our city.”

Gronner wasn’t impressed with his line of thinking.

“He’s scared,” Gronner said of the mayor. “But he should flip that script in his own mind and say that it was the best week of his life, because something really huge and important and necessary happened in his state. It doesn’t help you to hide.”

“I’m thrilled,” she continued. “And I’m honored. Because it is going to go down in history that this gigantic worldwide revolution started here.”

That was the Minneapolis on display in Powderhorn Park on Sunday — confident, determined, and dead set on trying to take advantage of the opportunity that it now, after so much needless violence and suffering, holds in its hands.

This confidence isn’t endemic to Minneapolis. It was earned day by day over the last two weeks as people kept showing up, kept organizing, and kept demanding better for themselves and their city even as the National Guard choked off streets and curfews boxed in protesters.

At the onset of the event, Kandace Montgomery, director of the Black Visions Collective, spoke with the swagger of someone who knows that they are capable of creating and living in a new world.

“I want to hold up everyone who has been out here taking real risks and working hard to support and protect each other in community,” she said. “Literally fighting fires! Feeding each other. Defending neighbors from white supremacists — we are already doing this work, y’all.”

It is that kind of organizing, that doggedness, that has encouraged Minneapolis city councilors to set about making history.

When City Councilor Steve Fletcher first floated disbanding the police department almost a week ago in a 26-tweet thread, his final tweet was his shortest and most simple: “Let’s show the world what Minneapolis is made of.”

Hennepin County Attorney Mike Freeman got the message last week when protesters demonstrated outside his house. Frey heard it loud and clear on Saturday. And with this latest announcement, the rest of the world is getting an earful.

It is worth noting, of course, that this council didn’t come together by accident. Its makeup is the result of years of labor by black activists and allies to elect progressives and make the case to them and the people they represent that abolition — not reform — is the only realistic path forward for police.

In truth, Minneapolis has already tried the aggressive reform approach. Body cameras are already mandated and officers are already banned from “warrior-style” trainings. Now, the city is set to lead an experiment in rethinking public safety entirely.

The hard work isn’t over. Many of the city council members who climbed onto that stage have made lofty promises before and fallen short of delivering on them. But even people who have been let down before left Sunday’s event optimistic.

Ingrid Richards was born in Trinidad, but has lived in South Minneapolis for four decades. She runs a highly acclaimed pop-up Caribbean restaurant called Ingredients and watched from a lawn chair in the shade as her daughter prepared to take the stage to deliver a poem.

“I want my grandson — he’s 17 — where I don’t feel scared when he leaves the house,” she said. “This is a beginning. [But] white people are involved in this. It’s not just us who have been the victims who are trying to solve it, but the people who have been benefiting from oppression [are] a part of it.