Minneapolis has begun to dismantle its police state 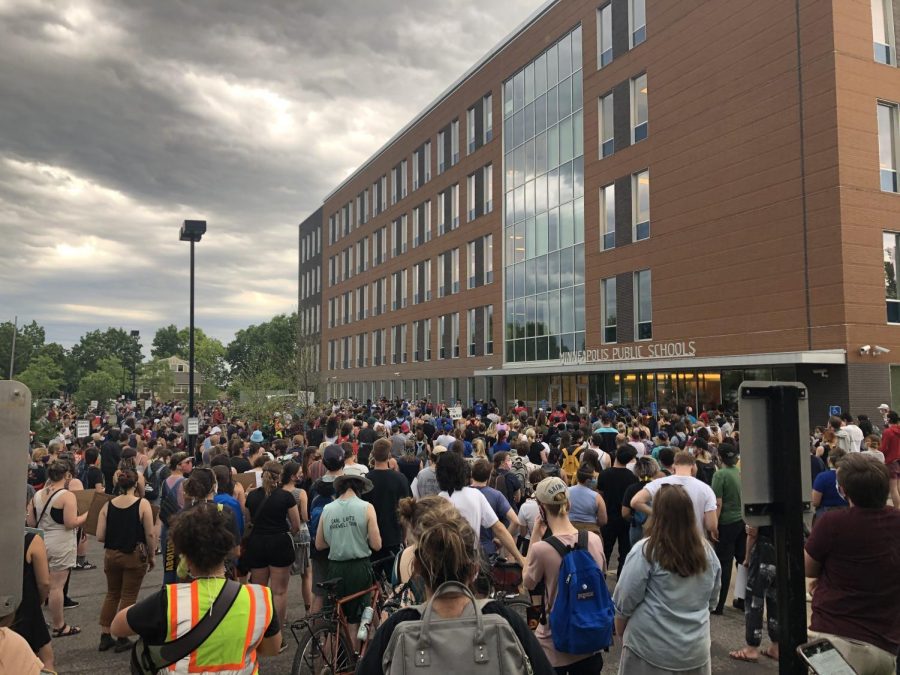 Shortly after 5 p.m. on Tuesday afternoon, standing just outside the entrance to the Minneapolis Public Schools (MPS) building in North Minneapolis, Robin Wonsley shrugged her shoulders.

Some 20 minutes before, Wonlsey, an organizer with Educate Minnesota, had given an impassioned speech to a crowd of protesters imploring MPS’s Board of Education to cut its ties with the Minneapolis Police Department — who she described as the “number one terrorists” in the city.

Now, she was milling about, cooling off, and trying to predict how the school board would vote.

“It’s hard to say,” she said. “I hope that this community pressure, as well as the surrounding uprising, really affirms for them that MPS: you need to cut those ties.”

Wonsley needn’t have worried. Less than an hour later, word came down decisively: the Board of Education voted unanimously, 10-0, to terminate the district’s million-plus dollar contract with the Minneapolis Police Department.

Something is happening in Minneapolis, the epicenter of what is now a national uprising against systemic racism and police brutality and an international movement for black lives.

All four police officers have been charged in the murder of George Floyd. Mutual aid efforts across the Twin Cities have been wildly successful. The Minnesota Freedom Fund has raised in excess of $4 million.

And on Tuesday, following a rally which drew Rep. Ilhan Omar (D-MN) and a host of passionate educators and young people, the school board kicked the police department out of the city’s public schools.

“This wouldn’t have happened two months ago,” educational studies professor Brian Lozenski said. “I would have said there’s no chance.”

But now, all of the sudden, the iron tight hold that local police have held on political power in Minneapolis is unraveling.

In addition to Minneapolis Public Schools, the University of Minnesota, the Minneapolis Park Board, and a host of private organizations including the Walker Art Center have also cut ties with the police department. One city councilor is talking openly about abolishing the department altogether.

“It’s a powerful moment,” Lozenski said. “This is something that could spread across the country.”

Indeed, school board member Josh Pauly said after the vote that school officials representing districts from Oregon to Illinois to New York have reached out to ask for guidance on how to get the police out of their schools.

The movement appears to be spreading across the Mississippi River as well. St. Paul’s school board has announced that it will reevaluate its relationship with St. Paul police next week, and could vote to terminate its contract with the department before the end of the month.

Police officers are currently commonplace in American high schools. However, while MPS had contracted with the Minneapolis Police Department since 1967, the phenomenon of police in schools is relatively new — largely a product of the Columbine school shooting.

“It was a response mechanism for suburban white kids where there were massive fears about [people] coming in and shooting up schools,” Wonsley said.

What the practice turned into, however, was another means of surveilling and criminalizing black and brown bodies within schools — not neutralizing threats outside their doors.

“That’s how it is manifested in our schools,” Wonsley said. “Through metal detectors. Through police officers. In my hometown of Chicago, a couple of public schools even had cells in the basement. We literally rearranged our public schools into prisons.”

Now, in Minneapolis and around the country, the idea that police officers make schools safer is eroding.

That much was clear on Tuesday night, where the scene at the Minneapolis Public School building before the vote was much more community meeting than protest. There was no major police presence, no helicopters whirring overhead, and a crowd that numbered in the hundreds rather than the thousands.

True to community meeting form, it wasn’t without conflict. A group of students and teachers from North Community High School came to speak in support of Charles Adams, a Minneapolis police officer who serves as the school’s Security Resource Officer and head football coach.

They don’t want to see Adams go. One student’s mother, Sherry Kanatzer, said that this was the first protest her son Dontavious had attended all week. Longtime North High history teacher Tom Lachermeier called Adams “one of the only people in the building who has never left.”

Lozenski said Adams should stay at North as well — but under different circumstances.

Once school districts divest from police, that should be a possibility. Omar, a mother of three Minneapolis Public School students and a graduate of Edison High School, did not mince words in her address to the crowd.

Now, Minneapolis has taken a first step towards rectifying that.

The school board has yet to decide how it will replace the police presence in Minneapolis schools. Superintendent Ed Graff is now charged with formulating a new safety plan by mid-August.

Lozenski said that any new plan must not continue with the “hyper-surveillance” of students. But he is hopeful that now, given the intensity of the uprisings and the speed of recent political action, landmark positive changes in education and beyond are within reach.

“This is the time,” he said. “If not now, when? If we’re not prepared to drastically make changes now, then when are we going to do it?

“This is one drastic change being made.”