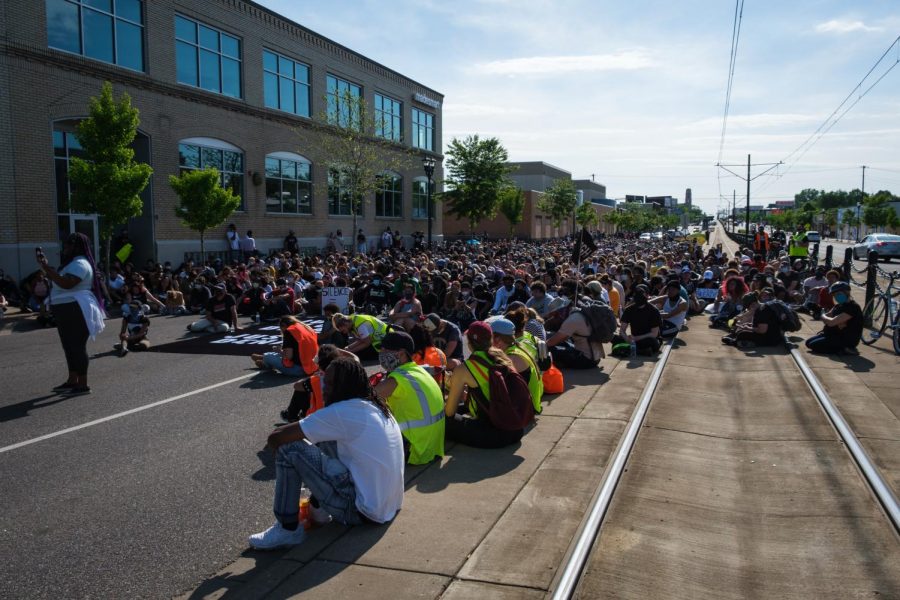 On May 31, 2020, peaceful protests against the Minneapolis police killing of George Floyd continued as more than a thousand protesters marched along I-94 and University Ave in Saint Paul. Photos by Kori Suzuki '21.

On Friday, May 30, the Instagram account @blmatmac uploaded its first post. The caption declared that the page will be “dedicated to resources [and] support for black Macalester students as well as and information and updates for anti-racist allies.”

In the five days since then, the page racked up more than 1000 followers. The account has become a hub of resources for all Mac students participating in anti-racist action and protest sparked by the killing of George Floyd by former Minneapolis police officer Derek Chauvin on Monday, May 25.

The page is auxiliary to Black Liberation Affairs Committee (BLAC), a black student organization at Macalester.

“A lot of us, specifically black students, were really, really overwhelmed,” @blmatmac administrator Fatiya Kedir ’21 said. “First, we just wanted to connect with each other… but we also saw that there were a lot of resources and information [on anti-racist action] all over… and we wanted something to reflect that in one place.”

Although five students hold the password to the account, the posts are vetted by a large group of black students and allies. The account is a collaborative, fluid endeavor, and the page’s administrators want to keep it that way.

“A lot of the stuff we put out through the page are brought to us by community members who send us direct messages, or message us personally, and provide us resources that they think would be beneficial for the collective community.”

Adminisrators have used the page to coordinate rides to protests, provide financial assistance to protesting students and share educational resources and information related to anti-racist activism.

The outpouring of support for the page has been “awe-inspiring,” according to Karubiu.

“I don’t think there’s been a day where I haven’t had some new person or multiple new people contact me or contact the page asking to get involved.” Karubiu said. “People haven’t missed a step.”

The account will continue to be an anti-racist resource beyond the scope of the current protests. Throughout the summer and into next year, administrators say they are committed to challenging racism and anti-blackness at Macalester.

“We do not want to just be a trend,” @blmatmac administrator Juan Diaz ‘22 said. “There’s definitely a lot more that can be done, and I think there’s a lot more Macalester can do.”

“We want to make sure that we are being part of the community, not just a private school on Grand where people in the community are like “what is Macalester about?”

Some of these students have called on Macalester’s administration to answer that question.

On June 1, President Suzanne Rivera’s first day leading the college, BLAC members posted an open letter to Macalester’s senior administration on Instagram, calling on them to take stronger anti-racist action. @blmatmac reposted the letter, which was co-signed by several other student orgs and identity collectives for students of color.

“Being anti-racist is how to show us love,” the letter reads. “Your students are on the frontlines right now in every city fighting for our own lives.

“I welcome direct communication from students and I am so glad you feel you can reach out to me about your needs and concerns,” Rivera’s response read.

Rivera praised the students’ calls for accountability and justice, and invited students to an open discussion about Macalester’s role in anti-racist action on Tuesday, June 2.

Neither Rivera nor the letters’ authors responded to questions from The Mac Weekly on the nature of their conversation by the time of publication. However, the college appears to have taken up some of the students’ requests.

On June 2, the Civic Engagement Center published a page of resources for anti-racist activism in the Twin Cities on its website. The list was the first submission on the Mac Daily newsletter, and was promoted on Macalester College’s official Instagram. Macalester also announced that the Macalester reunion has been suspended in light of recent events.

Just as @blmatmac admins have called on Macalester to commit themselves to anti-racist action, they hope that Macalester students will do the same.

“My desire is that everyone looks within themselves, figures out what their maximum is, what’s the most they can do right now, and then tries to do that,” Karubiu said.

“And if everyone were doing their personal maximum, whatever form or shape that takes, then I think that what is happening right now will be of actual consequence.”