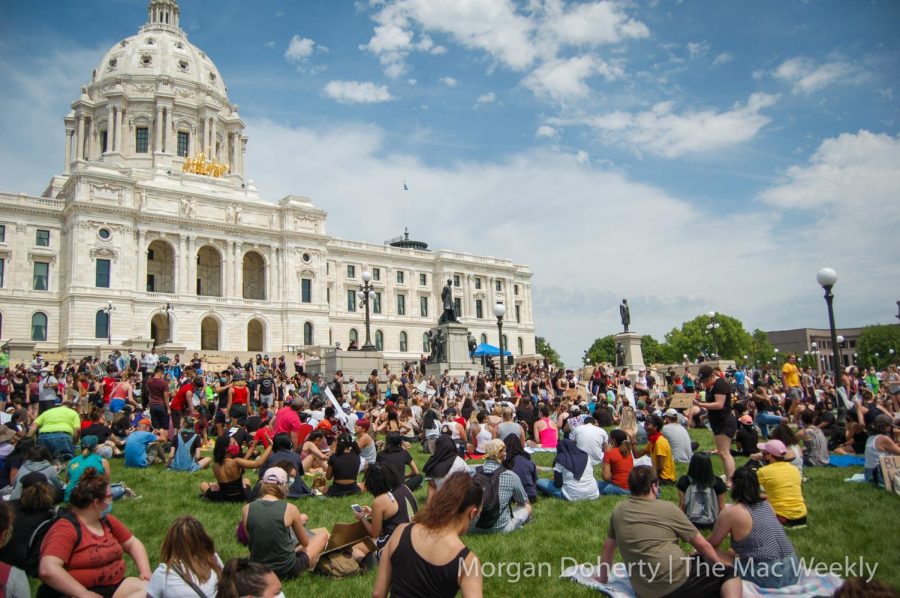 Crowd on the capitol lawn. Photo by Morgan Doherty '21

On a sunny, 90-degree day, in a crowd of thousands gathered on the Minnesota State Capitol lawn for the “Sit to Breathe” protest on Tuesday, June 2, people were turning down free water.

Specifically, they were turning down water offered by members of the Minnesota National Guard, who were weaving through the crowd, in full military dress, handing out bottles to protesters. Near the edge of the crowd, the Guard had stacked cases and cases of water under tents to distribute.

But even as they asked nearly every passerby, most people refused, politely, to take any. Instead, they only accepted water from fellow protesters and more than 175 official event volunteers.

The protesters were following the lead of the organizers who, several times, denounced the massive military and police presence at the protest. The event was organized and run by high school students who spent the afternoon on the steps of the capitol, urging state leaders to combat police brutality.

Behind them, a line of tanks loomed, blocking the entrance to the Capitol building. Up the street, more armored vehicles and guards carrying rifles shut off the roads feeding into the quad. Individuals dressed all in black surveyed the protest from the capitol roof.

“People have been protesting for so long and nothing has changed, so the fact that you still stand for the National Guard or the police… says a lot about you,” one of the youth organizers, who asked to remain anonymous, told The Mac Weekly. “When you put on that uniform, that’s what you stand for — it doesn’t matter what you think anymore.”

Tuesday’s protest came after numerous viral photos and videos of police misconduct on social media — scenes of police taking a knee at protests only to use tear gas and rubber bullets on the same crowd only minutes later. For many participating in the movement, trust in the authorities is at absolute zero.

Instead, the crowd of protesters itself was dotted with coolers of water bottles and boxes of snacks. Dozens of participants brought their own stock to the protest to hand out.

Near the back of the capitol lawn, a large, blue and white umbrella stuck up over the heads of people walking down the sidewalk. The umbrella was attached to an ice cream cart run by a group of parents calling themselves Moms and Dads for Justice.

Waverley Booth owns the nonprofit ice cream cart — which she’s had to close since the start of the pandemic. Now, though, it’s filled with over 700 ice cream bars and 500 bottles of water.

But it wasn’t just ice cream that brought Booth to the protest. Booth is white, but her children are biracial. Her daughter, Isis, is a recent high school graduate and spoke at the sit-in.

A group of six other Moms and Dads for Justice worked nearby. One of them handed an ice cream bar to a man named Josh Disher, who was pulling a wagon full of water and bags of chips.

Disher lives in South Minneapolis, just a few blocks from where the Minneapolis Police Department murdered George Floyd on May 25. Over the past several days, he has been working overtime to support his community.

When fires ravaged buildings across South Minneapolis, Disher volunteered to help clean up. At night, he’s been working with his neighborhood watch; during the day, he’s been delivering supplies to protesters.

“It’s tiring and exhausting, but it’s exhausting for everyone and it’s the least I could do,” Disher said. “If I could stay up all night, help out all the time, I would.”

While Disher personally doesn’t have strong feelings about the National Guard’s presence, he anticipated that others would.

“They’re just doing their jobs,” he said. “I know people won’t be grabbing waters from them, which is why we’re all out here doing this.”

Not everyone who came to distribute supplies had large carts of snacks. Some, like Tenille Warren, just brought a case of water.

“I’m feeling overwhelmed, I’m feeling sad, I’m feeling angry — I feel the love from people but I also feel the hate,” Warren said. “I just want to help. I feel like I’m doing a little part but we all need to do more.”

Across the street from the protest, a group of young women from St. Paul handed out water to people passing on the sidewalk. Ana Sanchez was among them. Her reasons for coming to the protest were personal. Two of her cousins, who were attending school in Mexico, were murdered.

“It’s hard to sleep at night because this is our battle too,” Sanchez said. “For even the United States to mistreat its own kind like that, that hurts deep down. You can feel it — our ancestors and everybody else who’s been mistreated.”

It wasn’t just people passing out water. Off-duty nurses roamed the lawn handing out electrolyte packets and carrying large first aid kits. A man on the sidewalk offered free bike repair to anyone at the protest.

Almost nobody took water from the National Guard — but many, many people leaned on the community itself for support. In the past week, these scenes have become almost commonplace — signs of a community learning to operate autonomously, without the aid of pillars of authority.

Eventually, members of the guard began to put their undistributed waters into the volunteers’ wagons.

It is that kind of moment that has youth organizers feeling cautiously optimistic. In years past, they’ve organized, protested, and seen miscarriage after miscarriage of justice. Now, they see the sheer number of volunteers and protesters as a good sign.

“It’s hard, but I feel like [events] like this make it a little easier,” one of the organizers said. “To know that there’s still hope and there’s people trying to make a change.”

Additional thanks to Maria, Katy, Angela, Jocelyn, Selena, and the nurses who also spoke to The Mac Weekly for this story. Other Moms and Dads for Justice are: Ray Eby, Anjeli Goel, Kelli Cox, Lisa Elsenbast, and Bridget and Jim McGreevy.