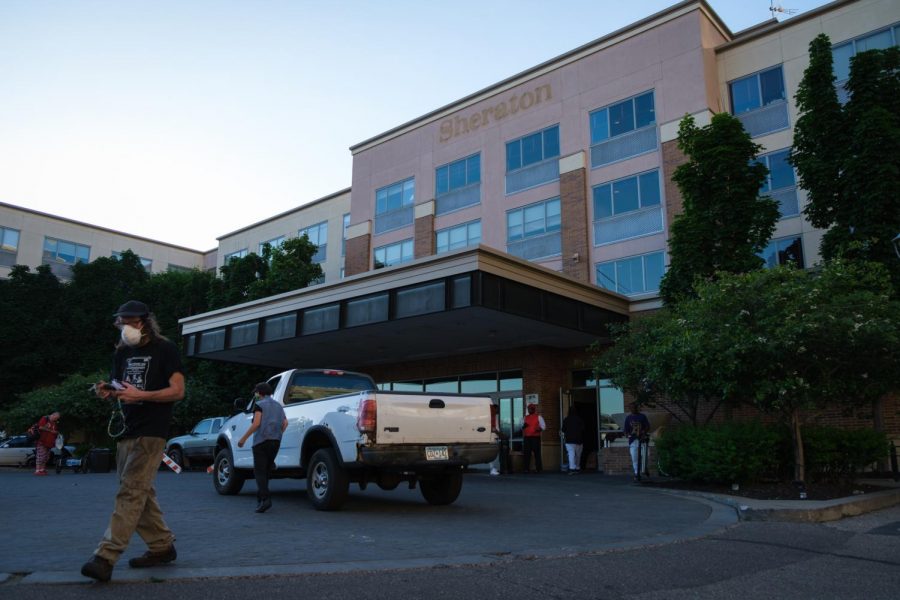 The entrance to the Midtown Sheraton, where over 200 people in need of shelter are staying during MSP's enforced curfew. Photo by Kori Suzuki '21.

The national television cameras congregated at the corner of 38th and Chicago Ave. on Monday morning, where, around noon, Terrence Floyd addressed a crowd gathered at the site of his brother’s murder to honor his memory and carry on the fight for peace and justice.

It was a remarkable, moving sight. But about ten blocks down Chicago Ave., past Powderhorn Park, past a row of buildings reduced to ash and foundation and countless houses adorned with signs calling for justice, something else was happening: a Sheraton hotel was full.

The Sheraton, a three-star hotel located on the same lot as the Midtown Global Market, is not ordinarily a memorable sight. It opened in 2005 and has been sold multiple times since, most recently in February to an investor named Jay Patel.

But on Monday afternoon, its doors were wide open, its lobby full of life. A handmade sign propped up against a reception podium announced an evening meeting for residents. Volunteers worked in the hotel kitchen, preparing bowls of cereal and cleaning.

Outside, someone had written the word “SANCTUARY” in black marker on a piece of cardboard and taped it to a stanchion just feet from the entrance.

In South Minneapolis, where police and far-right militants have terrorized protesters and targeted neighborhood businesses, the concept of communities protecting themselves through mutual aid networks is no longer abstract. What is happening at the Midtown Sheraton makes that clear.

For people without housing, that night was chaotic at best and violent at worst.

“People who are unsheltered were particularly vulnerable during this time for the reasons that we all understand… particularly people who were in the Greenway corridor,” Sheila Delaney, a resident of Loring Park and organizer at the hotel said.

“People were throwing things at them from bridges [and] threatening them, and then they literally weren’t safe from our police or national guard either,” she continued.

The next day, with an identical curfew in place, organizers focused on the city’s houseless and housing insecure population jumped into action.

The organizers knew that people needed a place to shelter, and felt that it would be too logistically challenging to transport people in the areas most heavily affected by violence to downtown Minneapolis, where many of the city’s hotels are concentrated.

They turned to the former Sheraton, where a handful of houseless people had stayed on Friday night, as the most accessible option.

“This hotel, being right on the Greenway, became the most obvious choice,” Delaney said.

The hotel’s owners planned to completely evacuate the building on Saturday afternoon, but, after negotiating with organizers, agreed to keep the hotel open and cede its day-to-day operation to the collective.

The plan might have come together suddenly, but the capacity to execute it has been years in the making. Delaney, for instance, was involved in work to shelter housing insecure people at the Drake Hotel, which was partially demolished after a Christmas Day fire last year.

Across the city and beyond, young people and older people, mutual aid veterans and mutual aid newcomers, are gaining real-time experience — not only in the pragmatics of organizing but in the practice of imagining, creating and believing in a different world.

The Sheraton sanctuary effort is about moving unsheltered people to safety. But to hear Delany tell it, the vision driving the effort is much more expansive than that.

“We are no longer simply allowing people to go unsheltered if they don’t want to be unsheltered,” she said. “We’re finally not only just saying, ‘Gosh, I wish we could do something’ — we are insisting that people are sheltered, which, for me, is radical and appropriate.”

In keeping with that pronouncement, Delaney and core organizers have made clear that they intend to continue operating the former hotel as a sanctuary indefinitely.

Their ability to do so will depend on their ability to keep bringing in resources from people around the Twin Cities, be it money, volunteer time, or supplies ranging from clothing to blankets to bar soap.

This, though, has been quite the start. In addition to fully staffing the hotel and raising funds, volunteers and residents have also kept watch to ensure that the building is protected at night.

It is not just this one housing effort, either. Emergency food banks around the Twin Cities are overflowing. Over the weekend, organizers at Seward Middle School put out a call for 85 food boxes for affected families. They received well over one thousand.

Neighborhoods have stepped up and stood together in other ways. The community defense networks that have formed over the last several days have not been perfect by any means, but they are a serious look at how people can protect each other in a world without police.

On Sunday afternoon in Stevens Square, for instance, a community group posted signs announcing a neighborhood watch along with safety tips, addresses of venues to seek medical attention and a number to call if people had questions or needed rides.

“Do not call the police,” the document read. “We do NOT want to escalate situations.”

This is, in many ways, a terrifying time to live in Minneapolis and to be an American. But for every gut-wrenching police action or speech from the White House, there has been a display of solidarity and love strong enough to serve as oxygen.

“The reason that many of the people are experiencing homelessness is because of systematic racism,” Delaney said. “We have gangster capitalism, and we have spent the history of our country not prioritizing humans.

“Now, what is happening here, is a huge intervention.”

Donate: To support sanctuary at the Midtown Sheraton, Venmo @cara-carlson-1.