The Mac Weekly • May 31, 2020 • https://themacweekly.com/78141/home/the-stories-behind-the-smoke-protest-solidarity-in-south-minneapolis/

The stories behind the smoke: protest, solidarity in South Minneapolis 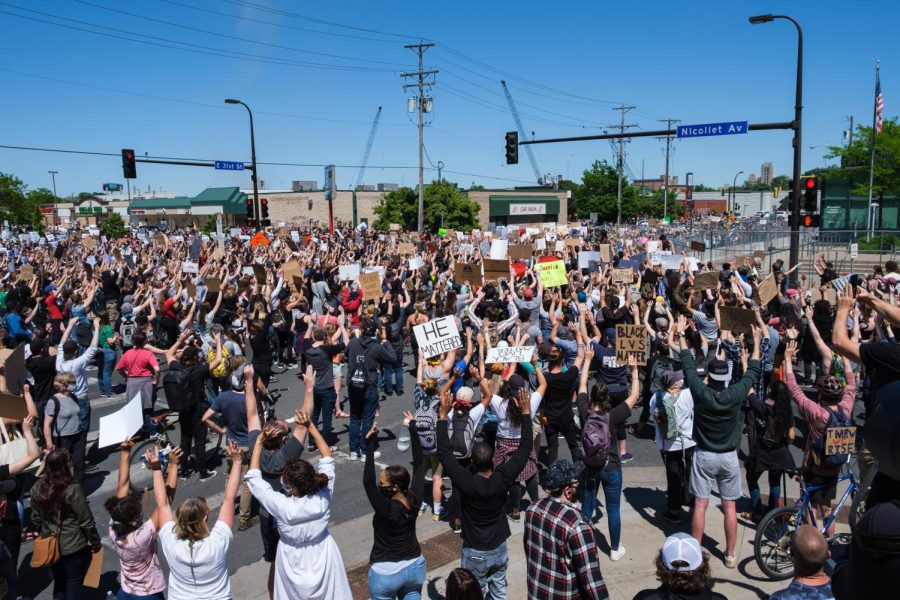 Hundreds of protesters show solidarity for George Floyd on the corner of Nicollet Ave and E 31st St. Photo by Kori Suzuki '21.

With a crowd in the thousands raising their fists down the road, Andrew Smith stood clad in black, gray sweatshirt tied around his waist, recalling the moment when he first saw the video of George Floyd being murdered facedown in a South Minneapolis street.

Smith didn’t know what he was going to do. But he knew he had to do something.

So early on Saturday morning, he hopped on a flight from Charlotte to Minneapolis — and several hours later, found himself walking through a strip mall parking lot, past a boarded up Office Depot, taking in a scene both depressing and uplifting.

“I’m liking that there are people who are trying to clean up, give out water bottles, keep their city looking nice,” Smith said, as protestors diligently cleaned a burned Wells Fargo across the street. “And then you still have the others who are speaking out.”

It is the nature of the speaking out that is dividing opinion these days. Minneapolis and St. Paul have set curfews in an effort to keep protesters off the streets and limit property damage; the governor has called up the national guard.

Smith, surveying plenty of that property damage, was less than convinced of its importance.

“They try to change the narrative to say that this rioting shit doesn’t work, doesn’t help,” he said. “But people were peacefully trying to tell that cop to let that man up, and that didn’t work either. What would have happened if those cops were bum-rushed? Would that have been better?”

Smith was asking the real questions. How do you protect your community when violence is already present in it, wearing uniforms, snuffing out life?

Again on Saturday night, police officers at the fifth precinct in Minneapolis shot rubber bullets and tear gas into a crowd of protesters, firing at journalists and hitting civilians.

“When we heard about the Target getting burned, I couldn’t care less,” he said. “I would love for the small businesses, especially the minority-owned ones to be left out of it, but when you’re at war, you’re just at war.”

Indeed, it looks like war on Lake Street. Gov. Tim Walz sees it, which is why he told reporters on Saturday that what was happening in Minneapolis was reminiscent of “Mogadishu and Baghdad” — revealing more about himself than any of those three cities in the process.

Smith was in Minnesota for barely more than 24 hours. He left this morning. But he made it to the Cup Foods where George Floyd was murdered, on the corner of 38th and Chicago, where flowers and artwork and vows for justice cover the buildings and lie in the intersection.

Outside of that burned Wells Fargo across from the strip mall, the former site of the neighborhood baseball stadium where Ted Williams starred for the Minneapolis Millers, protesters amassed bottles of water, snacks, and other supplies.

It was a similar scene to that which has played out in numerous churches and community centers in both Minneapolis and St. Paul over the last several days, donations pouring in to keep protesters hydrated, fed, and cared for as well as is possible.

People all over the Twin Cities are picking each other up in tremendous displays of solidarity. People like Smith and grain farmer Randy Jasper, who drove four-and-a-half hours from Muscoda, Wis. to the protest with his wife Zena, have come to join them.

They’re worried about the escalating chaos. They’re not applauding the property destruction. But they are refusing, as those in power so often do, to focus on it.

Damon Williams, born and raised in Maplewood, Minn., lamented the damage to one of his favorite Twin Cities neighborhoods and accused an undercover police officer of instigating the rioting. But he declined to condemn the use of violence outright.

“Look, how long have we been protesting peacefully? Only time they get to listening is when shit gets torn up,” Williams said. “They talk about looting — the people with the privilege here looted the land that they are standing on right now.

“They don’t want to talk about that reality,” he continued.

As Williams knows, the realities in Minneapolis shift by zip code, now just as much as they ever have. On Nicollet Ave., a 23-year-old Kenyan immigrant named Hamdi Ahmed stood across the street from a row of burned buildings with her mother, sadness heavy in her voice.

“My family moved out from a war,” she said. “We came here to find peace.”

Ten minutes further south, just down the street from where a group of protesters demonstrated and listened to speeches outside of Hennepin County Attorney Mike Freeman’s leafy house three blocks from Lake Harriet, a man watered his sizable lawn uninterrupted.

This is Minneapolis. Not a city breaking, but one that has been broken — and, propelled by the same sickening feeling that Andrew Smith felt watching the video of George Floyd’s murder, is trying to heal itself.