Amid the protests, echoes of past pain on University Ave. 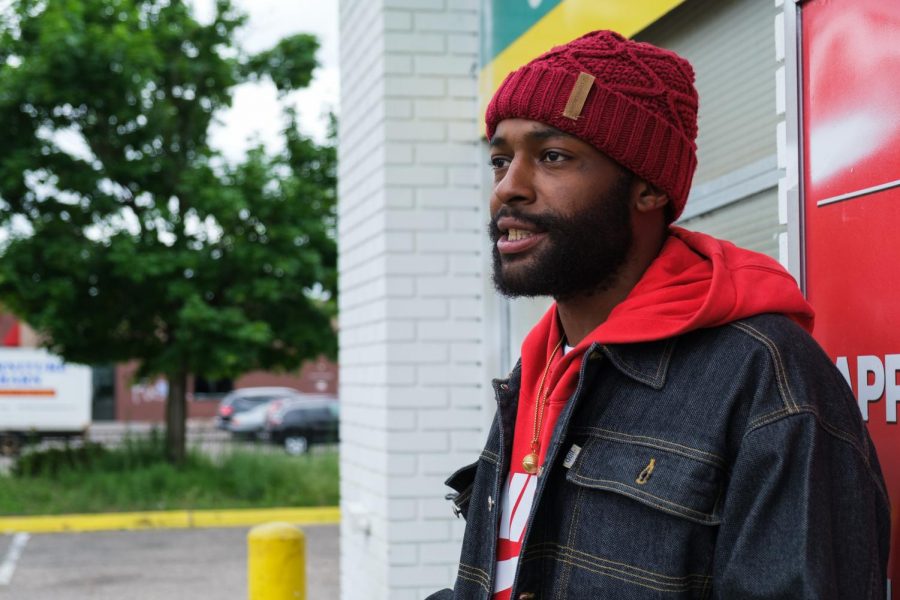 Joseph Ray Conley Jr. stands outside the BP station on the corner of University and Hamline to protest the murder of his cousin Dajuon Johnson. Photo by Kori Suzuki '21.

As hundreds of people streamed onto University Ave. on Friday morning to help clean up after protests rocked the street the night before, Joseph Ray Conley Jr., a day shy of 28 years old, stood outside of the BP station on the corner of University and Hamline and screamed at the passersby.

He wasn’t screaming about George Floyd. He was screaming about Dajuon Johnson, his cousin, who was shot in the neck while standing next to a gas pump at that same BP station last June.

Several days later, Johnson died of his wound at Regions Hospital. His murder remains unsolved. So on Friday, as his fellow citizens came to pitch in with brooms and gloves and garbage bags, Conley came to stand at the scene of a crime that they likely knew nothing about.

There were overlapping echoes of loss, pain, and fury on University in the aftermath of protests in the area that lasted late into Thursday night and included a standoff at a Target and fires at a liquor store, an auto parts store, and a cellular phone store, and an Ethiopian restaurant.

No one paid Conley much attention. The morning’s focus was on cleaning up the still-smoldering Midway, with the St. Paul Fire Department working to subdue the fire at the AutoZone from the night before.

“He was good-looking like me,” Conley said of his cousin. “It runs in the family.”

Conley is St. Paul through and through. He has the old Minnesota Twins ‘M’ logo tattooed in red above his right wrist. And yet in the midst of the cleanup on Friday, he stood in front of the BP and kicked an empty, aged Pioneer Press box to the ground in frustration.

Conley grew up on Minnehaha Avenue and then Marshall Avenue and attended Como Park High School before moving to Iowa to play basketball at Southeastern Community College. He was a forward, 6’4, 210, and even with his playing days years behind him, he cut an imposing figure.

When Conley was houseless for a time, the BP station was a safe haven. One of the overnight workers at the 24-hour station, a man named Carlos, would welcome people coming off of the Green Line out of the cold and into the store.

On occasion, Conley needed that help. Johnson, his cousin, did not.

“He was a baller, man,” Conley said of his cousin. “He never fell down in life like I did.”

If you hear Conley tell it, the BP was a bright spot for him at a difficult time. Others saw it very differently. St. Paul police had identified it as a “hotbed of criminal activity” and the city received numerous complaints from neighbors about noise, trash, and loitering.

It also, notably, was consistently uncooperative with police investigations and requests for surveillance video — making it a target for city officials.

“The city is seeing the extra activity, but they didn’t see the generosity of the store clerk,” Conley said. “They knew they were putting their business in jeopardy by extending their hands to people who couldn’t help themselves. And look what happened.”

This March, by a unanimous 7-0 vote, the St. Paul City Council revoked the station’s business and liquor licenses. Since then, it has been closed — a fact lost on onlookers who snapped photos of its hollowed-out interior thinking it was a casualty of the previous day’s protests.

“They don’t know what’s going on out here,” Conley said. “They ain’t out here. They come jumping out here today like they know what is going on, but… this place has been closed down. People have been dying up here. R.I.P. George, but R.I.P. Dajuon, because his murder is still unsolved.”

One of the few people who approached and spoke with Conley understood fully where he was coming from.

Hillary Parsons, a criminal defense attorney at Caplan & Tamburino, drove from her home in the Summit-Hill neighborhood to University — against her fiance’s wishes — to observe the landscape on the morning after. Speaking with Conley, she called herself a “tourist.”

“I get to come here when it’s safe and look around,” she said. “That doesn’t quite seem right to me, but I’m doing it.”

Until Friday morning, Parsons had been removed from the protests — if not mentally, then at least physically.

“We stayed up pretty late last night watching and listening to police scanners and ended up going to bed feeling relatively safe,” Parsons said. “But again, I live in a nice, white neighborhood. My guess is that they’ll open fire if [protests] start going on there. They’ll start using live rounds if this goes into the Summit area. And I think that’s bullshit.”

Considering the word from the White House — “when the looting starts, the shooting starts” — Parsons has the right idea. That is why she is supportive of the protests, even as they turn destructive.

In a city shaped by redlining and freeways and unequal funding, Parsons walked away to find her car and return to her Summit-Hill house, away from the flames. Conley remained outside of the BP, standing next to “BLM.” graffiti, again raising his voice to the street.

It was not lost on a number of observers across the country on Friday that George Floyd’s autopsy revealed that he suffered from hypertensive heart disease — one of several underlying conditions that the charging doctor blamed for contributing to his death.

“Everybody’s doing something,” he said. “I’m proud of that. Do it the right way: positive. Love.”