In Minneapolis, a return to normal and a cry to change it 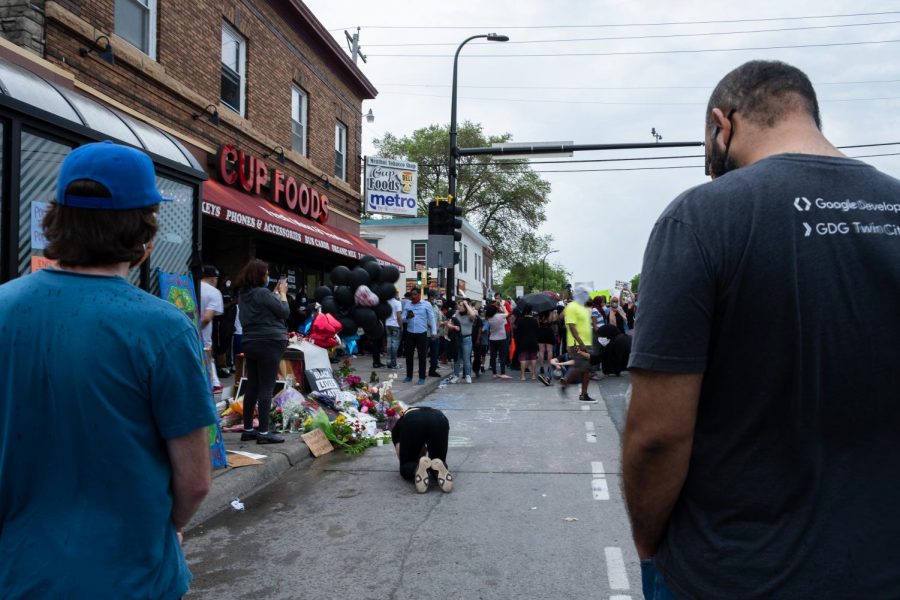 Hundreds gather to protest the death of George Floyd at the intersection where a Minneapolis police officer used a knee to hold him down by the neck on May 25th. Photos by Kori Suzuki '21.

Perverse though it may be, life has not felt so normal in Minneapolis, or, perhaps, in any American city, since the COVID-19 pandemic began.

On Monday, a white cop from a suburb murdered an unarmed black man accused of — at the worst — writing a fraudulent check for groceries in the midst of a new Great Depression.

The black man, George Floyd told the white police officer, Derek Chauvin, that he couldn’t breathe. Three of Chauvin’s fellow officers stood by watching. They did nothing to intervene, though their colleague had been the subject of a dozen brutality complaints during his career.

Chauvin is, or was, one of the 92 percent of Minneapolis police officers who live outside the city. Between 2000 and 2018, 63 percent of the people the department shot and killed were black in a city that is 63 percent white.

Chauvin and the three other officers have been fired. Hennepin County D.A. Mike Freeman is being urged to prosecute some or all of them for murder.

Now, Minneapolis feels like a conflict zone — and not just because of the smoke hanging in the air, the stench of burning chemicals, the boarded windows, the missing windows or the windows lying in the street.

It feels like a conflict zone because of the murals and messages that have popped up around the scene of the murder, in one of Minneapolis’ most diverse, progressive neighborhoods, and spread outward from there, carried by young people in masks standing on street corners and older people from their yards.

The ‘Abolish the Police’ sign hanging in the window of Moon Palace Books, remarkably left untouched on Wednesday night, the blue and yellow George Floyd mural going up on the facade of the Cup Foods building, the ‘I Can’t Breathe’ signs, the sidewalk chalk near 38th and Chicago — these are just as much part of the landscape now as the burnt out AutoZone or looted Target.

In so many conflict zones, places that have suffered through wars and land theft and the like, this kind of political imagery and messaging is ubiquitous. In those places, you can’t walk more than five minutes without being reminded of the battles fought there and the scars left behind. You can’t look away.

The truth, of course, is that Minneapolis has long been a conflict zone. The Minneapolis Police Department, led by the likes of police union chief Jacob Kroll, has, to put it quite mildly, been terrorizing non-white people for years.

The MPD150 report, researched and written by a cadre of community members to mark the department’s 150th anniversary in 2016, found that the department was “established to protect the interests of the wealthy, and racialized violence has always been part of that mission.”

It found that Minneapolis police officers “militarize and escalate” situations that call for social service intervention, that they criminalize dark skin and poverty and that the services that police provide could all be provided in alternative ways.

The police are, of course, part of a much larger system that is designed to control power and produce staggering racial inequality in Minneapolis and across Minnesota. Sometimes people can get away without seeing that inequality. Right now, they can’t.

What is jarring about this moment is only that our reality is being reflected in what we see on our streets: death, destruction, and, behind it all, a state more concerned with protecting property than people.

This — not breezy boutiques and full cafes — is what American cities are at their core: brutally enforced segregation and deprivation that, every so often, builds up enough, or is egregious enough, to spark mass resistance.

There are very few major American metropolises that have not seen that explosion of resistance, the smashing of storefronts, the deployment of federal troops, the mass arrests, and the pleas for peace from the mayor’s office, the representative’s office, the governor’s office.

This is who we are. Nothing that has happened here is new in the annals of American history, though the backdrop of a horribly mismanaged pandemic that is also disproportionately killing black and brown people is a newly dystopian touch.

If there is any comfort at all to be taken amidst the horror of the last several days, it is only that we are getting a glimpse of the true nature of our cities once again — and a glimpse of the kind of fury and collective action required of us to change it.

On Wednesday night, the author Ben Ehrenreich tweeted to the people in the streets in Minneapolis and Los Angeles that “You are the country’s only hope.”

He’s right. What is happening in Minneapolis right now is historically significant, even if it is no guarantee of a better tomorrow. The refusal of non-white communities and their allies in the city to ignore the murder of George Floyd has sparked a movement that has already spread to St. Paul, L.A. and beyond.

Perhaps it will spread further. Perhaps it won’t. But after the distance and despair of the last several months, it is more clear than ever that we need the kind of cataclysmic change that comes when people put themselves in harm’s way to stand together and fight back.

When protesters smash police stations and police vehicles, sites of violence and oppression, when they destroy or the seize the property of massive corporations, when they disrupt the desensitized hum of life in this white supremacist, capitalist, imperialist, patriarchal society, they demand attention — social distancing be damned.

What happened to George Floyd, what is happening in Minneapolis and across the country — that is our normal. We do live in conflict zones. People are desperately fighting for their lives, for their spaces, and for their voices, just as they always have been.

The underlying truth remains the same, just as the scene in Minneapolis, however extraordinary, is familiar. None of us can be truly safe unless we all are safe. Until then, we all must rage.

Support George Floyd’s Family: This GoFundMe has been verified by multiple sources, including groups on this same list, as going direct to the family. Whenever a GoFundMe is connected with a high profile event there are often duplicates. Some from people well intentioned but unconnected to the immediate situation. Sadly there can even be ones set up intentionally as scams. (https://gofundme.com/f/georgefloyd)

CTUL: Labor organizers focusing on BIPOC and immigrant workers. Their office is half a block from the site of George Floyd’s murder and they have been a core site of suppies and relief efforts to our neighbors in the streets. (https://ctul.ourpowerbase.net/civicrm/contribute/transact?reset=1&id=1)

North Star Health Collective: They do a number of things and in this moment they are providing rock solid street medics. (https://www.northstarhealthcollective.org/)

MPD 150: To support the ongoing institutional struggle to defund/abolish the police in Minneapolis and beyond. (https://mpd150.com)

Reclaim the Block: Another excellent police abolition group with a particular focus on shifting municipal budgets away from the carceral state and towards truly needed social services. (https://reclaimtheblock.org/home)