The Mac Weekly • May 23, 2020 • https://themacweekly.com/78031/home/new-title-ix-regulations-force-changes-to-macalesters-policy/ 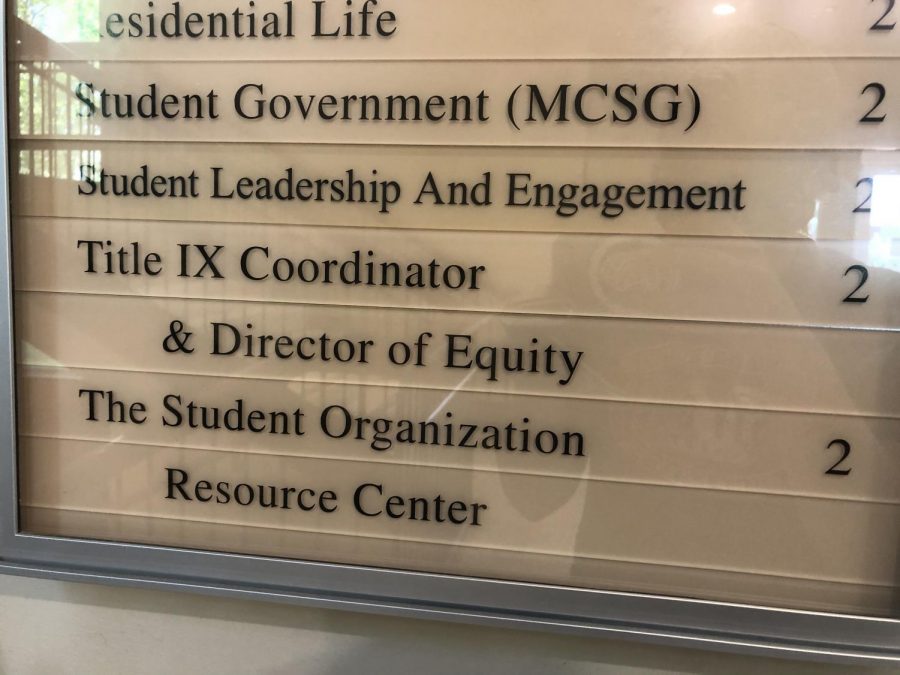 Signage for the office of the Title IX Coordinator. Photo by Lily Denehy '22.

On May 6, the U.S. Department of Education (DOE), helmed by Secretary of Education Betsy DeVos, released new Title IX regulations on sexual misconduct in education. The regulations mandate controversial measures including live hearings and cross-examinations and leave room for schools to limit their responsibility to investigate cases.

Higher education institutions, including Macalester, are required to implement these changes by Aug. 14.

Macalester’s new Title IX and Bias Harassment Coordinator Regina Curran released an email to students shortly after the guidelines were published stating that the college was “assessing and interpreting what effect the new rules will have on Macalester’s Title IX process and procedures.”

While Curran is still working with students, faculty and staff to analyze and discuss the 2,033-page set of guidelines, it’s clear that Macalester’s Title IX purview and processes will have to change.

The guidelines offer a variety of procedural options that schools can opt into. Other clauses mandate blanket changes to all Title IX offices across the country. Any cases opened on or after Aug. 14 will need to comply with the new rules.

One major change requires that every formal Title IX investigation include a live hearing and cross-examination. The hearing can be done virtually, but both parties need to be present simultaneously. At a minimum, both parties’ advisors — who may be attorneys — will have a chance to question the other party. All questions posed in the cross-examination must be deemed relevant before the hearing takes place.

Previous guidelines did not require live hearings. Under those rules, Macalester — along with many other colleges and universities — opted instead for a process that mostly takes place in writing without requiring any interaction between the two parties or their advisors.

That will have to change.

The Obama-era guidelines also did not mandate cross-examination, a system which many believe has the potential to retraumatize survivors and create additional conflict.

While the new 2020 guidelines will force schools to hold hearings, they do leave space for additional rules. Macalester is free to set expectations for decorum and behavior in these hearings — for example, schools can establish rules that prevent advisors from taking on an antagonistic or aggressive tone.

“One of my priorities is that we build that process in a way that allows students to get the good parts out of it and limit the bad parts and the fear and the distress,” Curran said.

The 2020 regulations open a door for establishing an informal resolution process for sexual assault allegations — procedures like mediation or restorative justice that aim to resolve conflict. These informal routes would not require a full investigation and hearing.

Under Macalester’s current policy, informal resolutions are never recorded on a student’s disciplinary record and they cannot result in sanctions, including suspension, expulsion and required behavior or counseling sessions. The 2020 regulations allow sanctions to be implemented in informal processes, so Macalester has the option to change that policy as well.

In the past, some institutions have pressured parties to opt for cheaper and lower-profile informal resolution processes instead of official investigations. Since 2001, the DOE guidance has discouraged informal resolution in sexual assault cases for that reason.

The 2020 guidelines specify that if a school chooses to offer informal resolution processes, both parties involved would need to agree in writing to participate. Informal resolution will not be an option when the respondent is an employee, and the rules require the process to be conducted by a trained facilitator.

Curran, who is a trained facilitator, noted that both the methods and usefulness of informal processes vary — she hopes to hear opinions and advice on these possibilities before writing Macalester’s guidelines.

“I’ve got experience with a few different types of what you would call alternative dispute resolution,” Curran said. “I think we need to have a discussion about it as a community and about all of the options that the regulations allow.”

With these procedural changes, Macalester’s timeline for closing Title IX cases might also change. Right now, Title IX investigations have a 60-day deadline. The new regulations mandate specific timeframes for a few different stages of the process, including two ten-day evidence review periods prior to the hearing, but don’t mandate a specific timeframe for the entire process.

Curran is still doing the math on how the prescribed timelines will affect Macalester’s investigation timeline. Macalester’s current Sexual Misconduct Policy sets a 60-day timeline for completing investigations, which could change along with the rest of the process.

The 2020 regulations alter not only the Title IX complaint and investigation procedures; they also narrow what complaints can be pursued under Title IX.

The new definition limits sexual harassment to only behavior that falls into all three categories.

The new guidelines also limit the jurisdiction of Title IX; many incidents that occur off campus will not fall under the legal purview of Title IX. Complaints only fall under the Title IX office when the incident happened on campus or “where schools exercise substantial control over certain situations,” according to Curran.

That would include situations like athletics travel and other school-sponsored trips. But during study away or in private off-campus homes and apartments, any incidents will not be considered violations of Title IX.

However, schools can still go beyond the federal guidelines and create additional rules — further regulations and consequences might fall under student codes of conduct, for example. Macalester could implement procedures for addressing off-campus incidents.

If Macalester does want to address those issues, the college will need to create new rules and decide which office or policy will be responsible for investigating breaches of those rules.

The Obama administration’s guidelines instructed schools to use a “preponderance of evidence” standard, meaning the accused party is found guilty if adjudicators are more certain than not that the incident occurred. The new regulations allow schools to choose between that standard and “clear and convincing” evidence, which demands a higher degree of certainty. They also require schools to use the same standard of evidence across the board for students and employees.

Macalester currently uses “preponderance of evidence” in all cases, which the school can choose to maintain.

“I have no intention to change our policies,” Curran said. “I don’t believe sexual misconduct policy should be referencing any party’s sex or gender anyway, because it can happen to anyone and it can happen in any combination of ways, and so we want to be able to protect everyone.”

Revisions and compliance at Macalester

Leading the development of new policies will be Curran’s first major task at Macalester; these regulations come at a time of transition for the Title IX office. After former Title IX and Bias Harassment Coordinator Timothy Dunn resigned in April 2019, Macalester launched a search and hired interim coordinator Dion Farganis. In February 2020, Curran was announced as the new, permanent Title IX and Bias Harassment Coordinator. Her first day at Macalester was April 13, amidst the campus shutdown.

Less than a month into Curran’s employment, the Trump administration released the new rules.

“When you start at any institution you want to learn what they are about,” Curran said. “Ideally, you would not then rewrite a university policy in your first two months of employment, but here we are.”

Curran hopes to focus on providing support to anyone who ends up in her office.

“It’s been my experience over the years doing this work that I actually spend much more of my time providing supportive measures than I do overseeing formal investigations,” Curran said. “It’s just been my experience that that’s what students tend to want.

Curran plans on getting students, faculty and staff involved in the process of revising Macalester’s Title IX policy every year. That might include forming either a standing or ad-hoc committee.

“We’re going to get [the new regulations] into place before Aug. 14, but then, come January [or] February, we’re going to start a whole process of looking at them again, and we will continue to do that for certainly as long as I work here,” Curran said.

In her May 6 email, she invited community members to send her a message if they were interested in participating in conversations this summer about how Macalester can adjust to meet the new federal guidelines.

On May 18, Curran sent an email to those who had expressed interest inviting them to engage in one of two 90-minute discussion and feedback forums over the next five weeks. She plans to update the campus once Macalester’s new rules are released ahead of the August deadline.

Response from the Macalester community

Across the country, students and activists have been swift in their critiques of the new national rules.

The American Civil Liberties Union filed a lawsuit on behalf of several advocacy groups arguing that the guidelines are too narrow in their definition of sexual harassment and leave too much room for schools to deny a responsibility to investigate incidents.

Hamre Center for Health and Wellness Counseling Director Liz Schneider-Bateman echoed the widespread concerns over how processes under the new regulations might harm survivors.

“The things that are included in the new legislation are… seemingly not trauma-informed and potentially could make it even more difficult and painful for people to report [to the Title IX office],” Schneider-Bateman said.

On May 12, Aberdeen Morrow ’22 and Emma Ziegler ’22 began circulating a petition outlining several requests aimed at protecting survivors on campus. It focuses on the clauses of the new regulations where Macalester has some choice in the implementation, urging the Title IX office to keep its 60-day timeline for investigations, maintain its preponderance of evidence standard, create policies for addressing off-campus incidents and bar the use of informal resolution mechanisms.

The petition, which Morrow and Ziegler adapted from an advocacy group called Know Your IX, asks Macalester to issue a public statement committing to these policies by June 12.

Morrow and Ziegler started the petition hoping to address the fear and frustration that the regulations have sparked.

“I think Macalester definitely makes it a point… of saying that we are a safe and inclusive environment and that we want to protect people, but it doesn’t feel like there’s been enough surrounding this new Title IX, which is really really scary for a lot of people,” Morrow said. “That was our biggest motivation.”

The petition mostly advocates for sticking as closely to the old rules as possible. However, Ziegler noted that in her own experiences with the Title IX process, those rules were far from perfect.

“The Title IX process now is inherently retraumatizing and the petition just asks the administration to minimize the extent to which this new rule will further harm survivors,” Ziegler said. “This is just the beginning of making Title IX at Macalester actually centered around recovery and wellbeing of survivors.”

As of now, over 300 students and employees have signed the petition.

Morrow and Ziegler hope the petition creates an opportunity to talk to administrators about what students want to see from the Title IX process.

Morrow and Ziegler have shared the petition with Curran, President Brian Rosenberg and Vice President of Student Affairs Donna Lee; they also addressed it to incoming President Suzanne Rivera, though they have not sent it to her. Curran, Rosenberg and Lee have all seen the petition.

“I’ve seen it [and] we’re taking all of your input really seriously,” Curran said. “I believe strongly… that Macalester is really invested in inclusion and safety of all of our students, and also that we need to go through a community process… I appreciate students being invested in what our policy is going to look like.”

Morrow and Ziegler hope whatever changes Macalester makes include strong support for survivors on campus.

“There have been words that say, ‘We’re committed to maintaining an educational environment that’s inclusive, equitable, and safe,’ but there have not been words that specifically say to survivors, ‘We care for you, we support you, and we protect you,’ and that is what actually creates that environment,” Ziegler said. “We need to hear that.”