The Mac Weekly • May 20, 2020 • https://themacweekly.com/78024/home/rosenberg-announces-salary-freezes-budget-cuts-updates-on-macalester-admissions/ 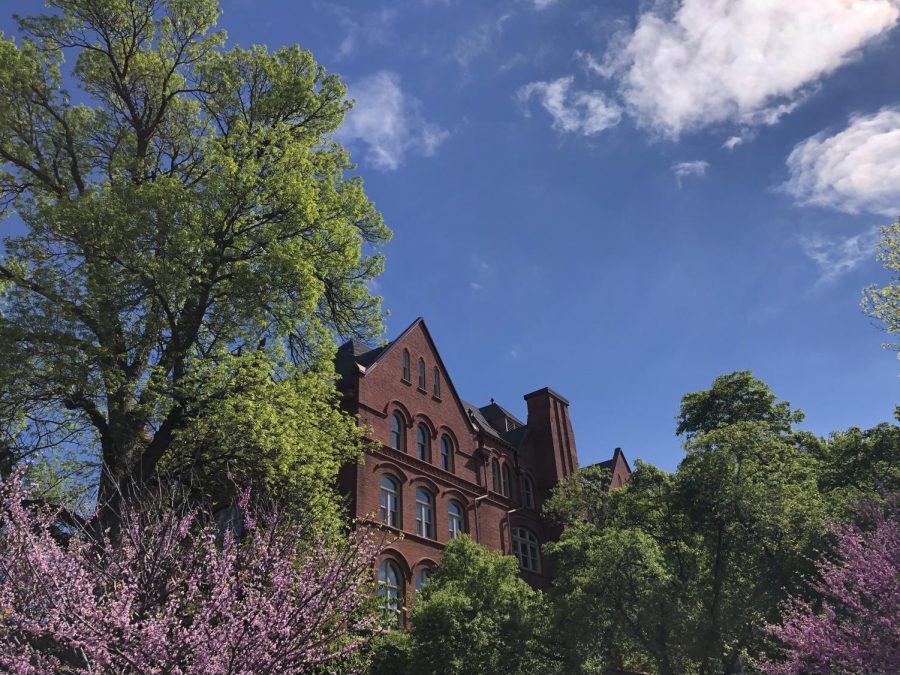 Already, Macalester has seen additional costs due to the pandemic. Refunding room and board cost the college between $2.5 and three million. Although it was able to save by not hiring new employees and altering large events like commencement, the college spent about $2 million more this year than it had planned to.

Rosenberg noted that the college’s biggest challenge is in net tuition revenue, which usually accounts for about 60 percent of the college’s budget. Less first years — and potentially more students taking leaves of absence — means less revenue from room and board and tuition.

On the bright side, admissions for the class of 2024 has not taken as large of a hit as some had previously estimated. According to Vice President for Admissions and Financial Aid Jeff Allen, 537 incoming first years had put down deposits as of Tuesday evening. Another 26 have declared their intent to enroll, but have not yet put down deposits.

The extended commitment deadline is June 1, by which time the college hopes to have 590 students committed. The end goal for the class of 2024 is 545 students, but the college is anticipating a summer “melt”: students who back out, decide to take a gap year or a leave of absence. Approximately 160 students who were supposed to go abroad this fall will also be on campus; Rosenberg noted that “virtually all” have registered for fall classes.

Although Rosenberg’s memo noted that numbers on the incoming class are “encouraging,” the financial aid office has also seen an increase in student need, both among the incoming first year class and returning students. This means the financial aid office will need to spend more next year; taking student need into account, the college is estimating that it will be 10 percent short of its budgeted tuition revenue.

“We will continue our policy of meeting the full demonstrated need of all of our students, and so, we expect our financial aid budget and our discount rate will increase,” Rosenberg said.

To mitigate the anticipated increases, the board of trustees has approved several cost-cutting measures for next year, which were outlined in Rosenberg’s May 18 memo. Most of the measures center on faculty and staff compensation, which accounts for two-thirds of the college’s spending, according to the memo.

All faculty and staff salaries will be frozen for the next academic year. The president, provost, and vice presidents will have their salaries cut by five percent. The college is also suspending contributions to all employees’ retirement accounts for six months between August 2020 and January 2021. The college will also hold off on hiring for empty positions, except those that are “considered essential to the operations of the college,” according to the memo.

Rosenberg estimated that the college would save about $1.5 million from the salary freeze, between $2-2.2 million from the suspension of retirement benefits, $100,000 from the reduction in senior staff salaries and — although he noted it was difficult to guess — several hundreds of thousands from the hiring suspension.

As of now, the college is considering its options when it comes to further pay reductions, which might come in the form of layoffs, pay cuts or furloughs.

“In our general discussions, layoffs, which obviously are the most permanent moves, would be the last thing that we would do,” Rosenberg said in the webinar. “So, we would look for ways to reduce the salary budget through measures that were not permanent, but temporary, had the least impact on any particular group of employees [and] were equitably distributed.”

The board of trustees also gave its support for the college to draw up to $8 million from its reserve fund, which contains budget surpluses from previous years and currently stands at about $16 million. The memo also states that, in the future, the board could raise that $8 million ceiling, and a one-time draw from the endowment could also be on the table.

Additional expenditures will also see cuts next year. While the college had previously planned to increase program spending by one percent for academic departments, the library and athletics (among others), they are now being held flat for next year. This freeze will save the college an expected $250,000. Rosenberg noted that these programs could see further cuts in the future.

But Rosenberg also said he was hesitant to comment on specifics of future decisions, given his impending departure from the college on May 31, when Suzanne Rivera will take over his position. He noted that Rivera has been participating in daily senior staff meetings for the last month and has been involved in the decision-making process.

Upcoming decisions will include planning for Macalester’s academic calendar and for how learning will happen next year. At the end of April, senior staff circulated six possible plans for next year; the webinar and memo both discussed these possibilities of altered learning environments and semester start dates.

Although those scenarios and previous communication from senior staff indicated that the college would avoid online learning if at all possible, Rosenberg did mention the possibility that some of next semester could take place online to avoid a repeat of the sudden scramble that happened this spring.

“It is probably the case that having to do what we did this spring and do a sudden stop and…  evacuation of the campus would be, logistically, dramatically more disruptive than simply deciding that we’re going to take a period ahead of time and say, this is going to be remote,” Rosenberg said.

Going remote could represent an additional financial threat to Macalester. Online instruction means less students on campus paying for room and board, and if students choose to take a leave of absence, it would mean an additional loss in tuition revenue.

“The most negative case, the one that results in the biggest negative number, would result if we had to be online for an entire semester,” Rosenberg said during the webinar. “The worst-case scenario envisions a much larger drop in student numbers, something close to 25 percent of the student body not being here next year. [It] envisions a semester online, and it envisions a price point that would be lower than our normal price point.”

Even those decisions, though, will not be set in stone.

“Any college at this point that claims to be able to declare with certainty exactly what they’re going to be doing in September or October is manifesting a degree of confidence that is probably not warranted,” Rosenberg said.

Once students do return to campus, the college will need to focus on mitigating risks. Rosenberg discussed the risks of residential halls, where shared rooms and bathrooms make social distancing essentially impossible. According to Rosenberg, Macalester is working with neighboring colleges to develop a plan for housing students who need to be quarantined.

Class sizes are also a concern — while cutting the number of classes offered could be cheaper, keeping more classes available to reduce class size offers more chances for social distancing. The cancellation of fall study away also means that classes will need to accommodate the extra 160 students who will now be on campus.

Rosenberg said that faculty and administration are considering a range of possibilities, such as extending the class schedule to evenings and Saturdays and limiting in-person meetings for large classes.

Once the college narrows down its options for structuring the next academic year, a survey will be sent to students, faculty and staff. One important piece of information to gather will be the number of students and employees who self-identify as being “at-risk” for contracting the virus, and therefore cannot return to campus.

Rosenberg closed the webinar by acknowledging that many of the questions faculty and staff had raised couldn’t be fully answered yet.