The Mac Weekly • May 13, 2020 • https://themacweekly.com/78014/home/fossil-free-mac-releases-handbook-for-student-movements/ 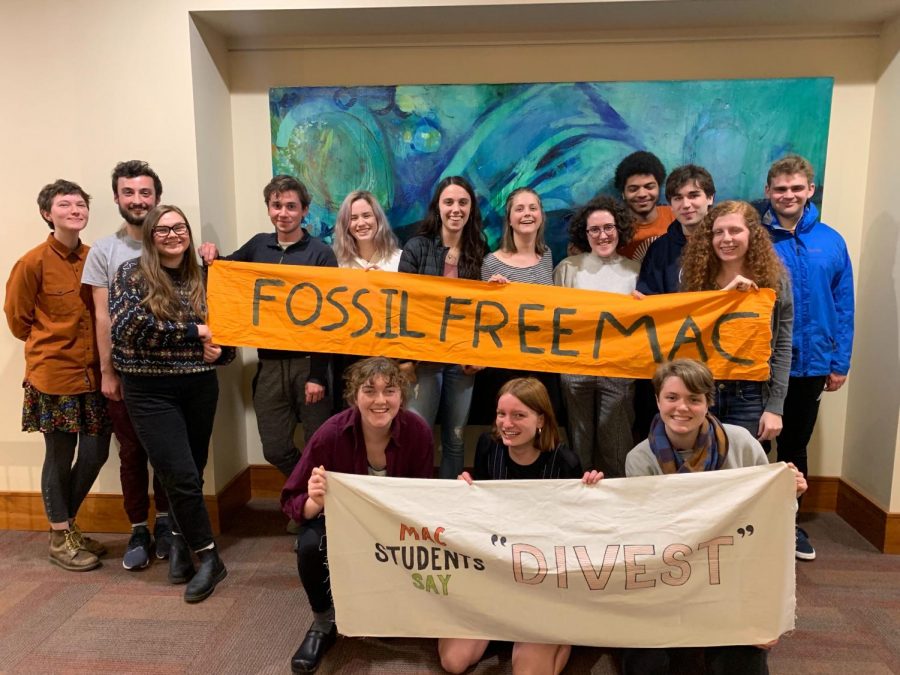 When Fossil Free Mac (FFM) disbanded at the end of last semester, the student leaders knew they were leaving with a unique set of skills. Over FFM’s seven-year divestment campaign, they had learned to craft their argument, mobilize campus support and communicate their platform to the board of trustees.

“It was hard for us to decide to disband Fossil Free Mac, but when we did come to that decision we wanted to make sure that it would be accessible if any other student orgs wanted to begin up another divestment campaign,” core FFM member Sasha Lewis-Norelle said.

The 29-page handbook, which FFM members have distributed online via social media pages and in the Mac Daily, outlines the campaign’s timeline and strategies. It explains everything from the group’s organizational structure — an open “core” of dedicated members leading the larger group — to instructions on how to set up a meeting with a trustee.

Core FFMmember Malia Becker said that making the handbook accessible to anyone with any level of organizing experience was a priority.

“[We were] trying to brainstorm… what things, perhaps, are obvious to us because we’ve been doing it for a while, but wouldn’t necessarily be obvious to people who haven’t been in a student org before or people who are starting a new campaign,” Becker said.

FFM disbanded at the end of the Fall 2019 semester after the board of trustees voted to place a moratorium on its direct partnerships with the fossil fuel industry — effectively enacting FFM’s proposal.

But the board approved the proposal with a caveat — if investment in fossil fuels led to a net reduction in carbon emissions, the board stated that they would keep these assets. FFM’s handbook serves, in part, as an explanation of this outcome and the events leading up to it.

“After the board made the decision, there was a lot of confusion and a lot of people coming up to us and asking us what was going on,” Becker said. “We sort of felt a desire to write it out in a comprehensive way.”

In creating a handbook for future student activist campaigns, Becker said that they are honoring a legacy of institutional memory passed down through generations of Macalester students.

“Our campaign relied a lot on stories that we heard from alumni and from older members of our campaign and hearing about different student activist work on campus was really important for us,” Becker said.

Writing the handbook offered the members a chance to reflect on their years of work. For seniors like Becker, it was one last chance to get FFM together and finish a project.

“It was really cool to go back through and reflect on the campaign and remember, ‘Oh, wow, we did that,’” Becker said. “We really started out with this idea, and it became so much more.”

But reflecting on the full seven years of the campaign meant revisiting the challenges and setbacks, too.

“It was… almost frustration in some parts,” Lewis-Norelle said. “I was really satisfied with everything we’ve accomplished, but also just having to rewrite all of the things we had to go through just to get the board of trustees to consider our proposal… was just a reminder of how much movements like ours and movements of change have to struggle and fight for even small things.”

“It was definitely a mix of emotions,” Becker added. “There was also a lot of looking back on things that happened, knowing what we know now, and being like, ‘Hmm, I wonder if that was the right decision.’”

Looking forward, FFM hopes that other student movements might learn from their work. Lewis-Norelle noted that the handbook could serve as a jumping-off point for other divestment movements. The group also sent the handbook to Divest Ed, an organizing website for student divestment campaigns.

Even though FFM’s campaign was focused on divestment, the handbook outlines how any student organization might make more connections across campus and engage the community.

“I think all of those things could be done in lots of different arenas that wouldn’t necessarily be a divestment campaign,” Becker said.

Even though the handbook was the group’s last official effort, the core FFM members made sure to leave their names and contact information on the last page.

“If anyone ever came to me for any sort of advice, I would do whatever I could to support them,” Lewis-Norelle said. “If there are any orgs that would want to come to me or ask about Fossil Free Mac I would be happy to talk about it.”