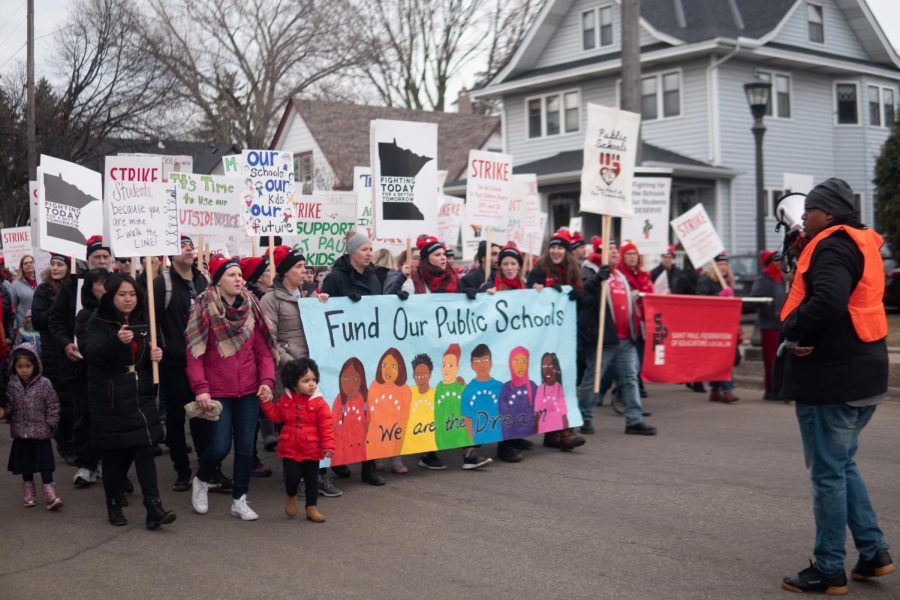 St. Paul Public School educators went on strike on Tuesday, March 10 after the Saint Paul Federation of Educators (SPFE) and St. Paul Public Schools (SPPS) failed to reach an agreement on a new two-year contract. 36,000 students were immediately out of school in the district’s first strike since 1946.

SPFE’s demands include additional resources for mental health, multilingual and special education supports for students. Superintendent Joe Gothard has estimated that the SPFE proposals will cost more than $50 million, a pricetag the district calls fiscally irresponsible.

“I want to make it clear: I believe our students need and deserve additional support,” Gothard said in a press release. “That has never been in question. However, we must prioritize our spending because we have limited resources.”

St. Paul educators and SPFE were heading back to the bargaining table on Thursday morning at 8 a.m.

“We are ready to start negotiating to get a contract that won’t leave any student or educator behind,” SPFE president Nick Faber said. “St. Paul educators miss their students and want to get back to school.”

On Thursday morning, the district will open seven “Kid Space” sites giving students a place to go during the day. Kid Space will offer breakfast and lunch each day, and students will enjoy activities supervised by non-striking SPPS employees.

On Tuesday afternoon, the first day of the strike, over 3,000 gathered at Global Arts Plus-Upper Campus to march and picket the district offices at 360 Colborne Street.

Chao Vang is a first grade teacher at Phalen Lake Hmong Studies Magnet in SPPS. She was at Tuesday’s march.

“I’m here because of the students, I think a lot of the students and parents that we represent cannot advocate for themselves because they’re not here,” Vang said.

Vang would like to see more professional development for paraprofessionals and teachers, as well as more multilingual interpreters at her school. She has trouble communicating with some of her students’ families, who are Hmong and do not speak English.

“You’re talking about a lot of stuff that matters a lot.”

Many Macalester students have participated in activities supporting the strike — on Monday, students painted black and red signs outside of the Campus Center in support of SPFE in anticipation of the protest on Tuesday. On Tuesday afternoon, they gathered in Olin-Rice Science Hall and took the bus to the protest.

It was Hannah Steuer’s ’22 first time ever attending a teacher’s strike march and picket.

“I’m here because it was important for me to make time in my day to support the next generation in this community, even if I am not necessarily directly affected,” Steuer said. “I think it’s the mental health services that really stick out to me, because it takes up all of your energy, because if you don’t have that, you can’t focus on your education.”

Across Snelling Ave. from Macalester, Immanuel Lutheran Church has volunteered to host SPPS students from 8 a.m. until 4 p.m. each day for the remainder of the strike. At the time of publication, 12 Macalester students had signed up to volunteer at Immanuel in their spare time this week.

Mina Kianovsky ’21 volunteered at Immanuel Lutheran on Tuesday and Wednesday this week.

Kianovsky works for St. Paul Public Schools. She currently works as an off-campus student employee at Global Arts Plus — Upper Campus as a student teacher in the theater classroom. She also works part-time as a pool coordinator and lifeguard for the district at Como Park Senior High School and Como Park Elementary.

Both of Kianovsky’s jobs are called off this week in light of the strike.

“I don’t like [missing work], but it’s not dire for me,” Kianovsky said. “And the current situation in the district is dire.”

Kianovsky said it is more worthwhile for Macalester students to volunteer than to participate in demonstrations.

“While it’s important that those teachers know that they are supported by their community, if they wanted to help the strikes, the answer isn’t going to the strike because you’re not a teacher,” Kianovsky said. “More bodies there is good, but this strike is for them and if you want to be helpful in the strike, at this moment, it’s more useful for people to volunteer at the childcare center rather than going to the strikes.”

On Tuesday, Gus Dexheimer ’20 volunteered at Immanuel in the morning and attended the picket and march in the afternoon. Normally, she works as an intern at Expo Elementary in St. Paul twice a week, and has since September.

“All of the requests that they made, I was like, ‘I can think of a kid who would really need that,’” Dexheimer said. “I have been overwhelmed with the reality of being in the classroom… that there are so many students who have so many needs that are not met, and it’s unrealistic and frankly bizarre to expect one teacher to fulfill those needs.”

Dexheimer is an educational studies and American studies double major and is considering going into elementary education after Macalester. She found the strike and march energizing for her own personal journey as she begins her career in education.

“I’ve been kind of slapped in the face with the reality of how hard that job is,” Dexheimer said. “I was kind of in a rut of,  ‘Oh no, public schools are underfunded and undersupported, and there’s nothing anyone can do about it,’ and then I was like, ‘Oh yeah, unions, teach[er’s] unions can make these demands,’ at least hopefully.”

Political science professor Lesley Lavery, who researches teacher’s unions and strikes, says that it could last from one day up to two weeks.

“The most important outside people right now might be the governor and state legislature,” Lavery wrote in an email to The Mac Weekly. “Gothard even concedes that funding levels for schools are below pre-2003 levels when adjusted for inflation. Getting money from the state to match promises could mean $25 million extra a year.”

Rachel Carpenter has been working for the district for four years, first as a Spanish teacher and now as a coordinator for the after school programs for the district’s elementary schools. She also went to the picket and march on Tuesday.

“I am here because I would not have been able to give my students a reason why I wasn’t here,” Carpenter said. “In talking to my students, they would want me to be here and I would want to be that model for them. And my dad recently passed away and I felt like he would have been really supportive of this as well. I’m here for the students and myself.”

Neither Faber nor SPPS Director of Communications Kevin Burns responded to requests to comment.