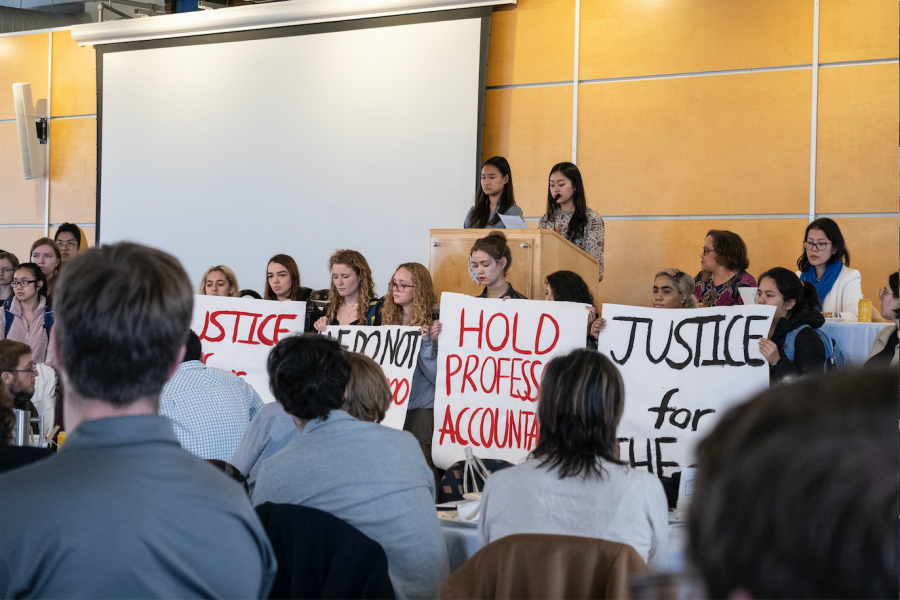 MCSG President Blair Cha ’20, supported by around 30 other students, argued that she has been mistreated by the college in a protest at the faculty meeting in Kagin Ballroom on Tuesday, Mar. 10.

Initially, Cha was scheduled to give an update on student government. When she stood up to speak, however, she instead outlined several allegations against economics professor Gary Krueger, who she had taken Introduction to Econometrics with during spring 2019.

Last June, less than two months after the conclusion of the class, she filed a Title IX case against Krueger claiming discrimination on the basis of gender, race, ethnicity and national origin in the classroom.

Cha, a former economics and applied math and statistics double major, dropped the economics major last summer after the incident, receiving no credit in Krueger’s class.

At the podium, Cha spoke for about five minutes flanked by other supporters holding signs reading “Justice for Blair,” “Hold Professors Accountable” and “We do not pay $60,000 for injustice.”

During her speech, Cha addressed both her experience in Krueger’s class and working with the college’s Title IX office, which she said misjudged her case after an arduous nine-month process.

“I struggled every day with extreme anxiety to the point where I could not stand the pain,” Cha said. “I endured every single day believing that the institution would hear me.”

The investigation cleared Krueger on the allegations of gender discrimination.

According to Cha, however, the case’s adjudicators did “acknowledge that Krueger has created an uncomfortable environment in class by using generalities and singling out students in class based on their race and nationality.”

Cha added that the matter has been referred to Provost Karine Moe, chair of the economics department Sarah West and Dean of the Institute for Global Citizenship Donna Maeda.

“I fell sick for over a week,” Cha continued.

Krueger was not at the meeting and declined to comment on the specific allegations against him, citing the confidentiality of the Title IX process.

Krueger said that by discussing the issue in public, Cha had breached this agreement.

“It’s totally beyond the pale,” he said.

Krueger added that members of the economics department have offered him support in the aftermath of the demonstration and that he has been in contact with Provost Karine Moe — his former colleague in the department — to discuss the issue.

Moe declined to comment on the protest or any future steps that the administration may take.

Cha hopes that the demonstration will bring the college to improve the transparency and expediency of the Title IX investigation process.

“In terms of future directions, inherently the [Title IX investigation] process is not very respectful or organized in terms of timeline,” Cha said. “They took too long and weren’t in contact with me frequently.”

This is not Cha’s first grievance with the Title IX office. Last spring, she wrote a 30-page report on the frought relationship between Macalester students and the office, describing ten survivors’ negative experiences with the Office of Title IX and particularly Title IX, Bias and Harassment Coordinator Timothy Dunn.

Cha said that she is proud of her protest and wanted it to be a public showing of resistance for faculty.

“I think it is powerful for the faculty to see their students who may be in their own classes and consolidate everyone’s efforts in this cause,” Cha said.

Indeed, after Cha finished speaking, a number of faculty applauded. Others did not.

“There must not be another Blair Cha,” she said.

Abe Asher contributed to the reporting of this story.