Way Back at Mac: Mascot evolution from MacQuack to Mac Scots 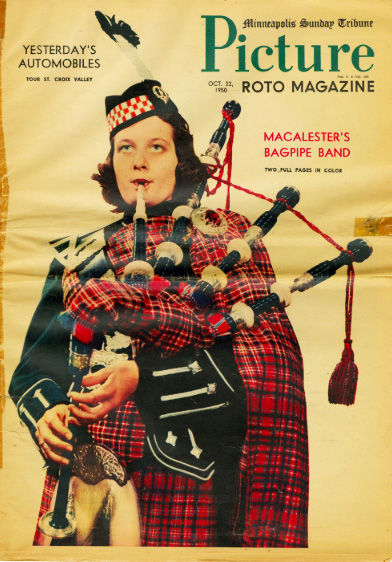 Last May, during the opening of professor Jess Pearson’s History in Action class exhibit, “Internationalism at Mac,” students and visitors buzzed about the most bizarre fact of the night — MacQuack, Macalester’s first mascot.

It all began in November 1937, when Staples High School students gave the Macalester football team a live duck for good luck. Although the true story of events is unclear, the “duck did not adjust well to college life” wrote Jeanne Kilde, in her book, “Nature and Revelation: A History of Macalester College.”

The fate of the duck remains mysterious, and so does the legacy of MacQuack and Macalester’s mascot decisions. Few other records other than The Mac Weekly article titled “The Future Looks Very, Very Dim for ‘MacQuack’, Football Mascot” from 1937,  mention the duck.

In the 1920s, the college athletics mascot trend picked up. The University of Minnesota’s Goldy Gopher appeared. Hamline University publicized a contest in the St. Paul Pioneer Press for their mascot (it ended up being The Piper). Macalester, however, had no school spirit representative.

Without a mascot, Macalester “did not boast much of an identity, either, apart from its Presbyterian connection, and even that was rather misleading because a majority of the student body was not Presbyterian,” Kilde wrote.

The school administration dove deep into its roots to unveil our mascot — the Scot, a Scottish person.

Macalester’s Scottish tradition comes from James Wallace. In 1930, Wallace, a prominent faculty member and former president, compiled a book on the history of his own ancestry, the Wallace and Bruce clans in Scotland. The effort to “establish a Scottish tradition,” The Mac Weekly wrote, occurred at the conjoint James Wallace’s 89th birthday-first Founder’s Day celebration.

It was a festive occasion, perfect for the history books. The Scottish theme took root with a notice in The Mac Weekly asking all “Macites” [what Mac students used to be called] to wear plaid and a Twin Cities-wide search for bagpipe players. With the success of the Scottish-themed Founder’s day celebration, Macalester became the Scots.

Picking a mascot may seem like all fun and games, but the Macalester Scots are an “apt metaphor for the institution” Kline wrote.

The Scottish tradition is recognizable in more than just Mac the Scot’s appearance at sporting and other college-wide events. Macalester’s namesake and Scottish connection extends to Clan MacAlister, a branch of Clan Donald — one of the largest Scottish clans, located in the Highlands region of Scotland.

“In the late 1940s, journalism professor, Ivan Burg, and his students, as part of a project to promote school spirit reached out to the chief of the clan, Charles MacAlister, to acquire the proper tartan,” Christina Feng ’20, who researched Macalester’s Scottish history in professor Pearson’s class, said.

A tartan is a patterned cloth distinctive to a certain Scottish clan and most prominently seen on Scottish kilts. According to Feng, Clan MacAlister’s leader approved of Mac the Scot’s kilted attire and “further showed his approval by sending a set of bagpipes to Minnesota”.

With Founder’s Day coming up, it is a perfect time to explore and potentially re-assess our mascot. When you hear the bagpipes this Friday, now you’ll know our Scottish history.