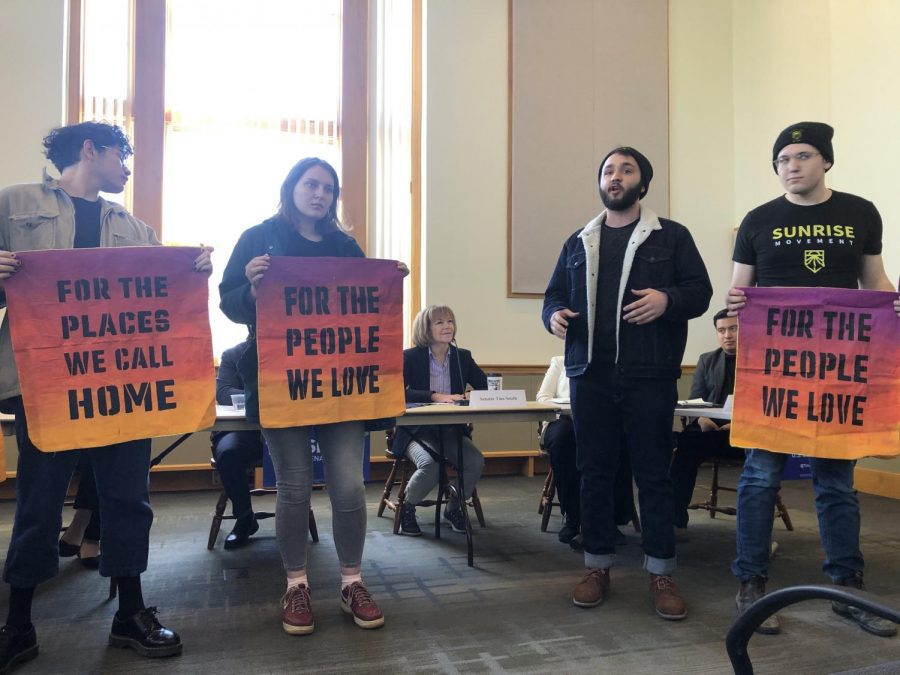 Sen. Tina Smith (D-MN) was grilled by climate activists over her refusal to support the Green New Deal and her acceptance of fossil fuel donations during a campaign event in Weyerhaeuser Boardroom on Friday morning.

“Senator Smith, we apologize for interrupting you, you just talked about mental health and failed to recognize the massive impact of climate change in anxiety and depression in young people,” Adam Marquardt ’22 said.

The protesters, holding purple and orange signs reading “For the people we love” and “For the places we call home” stretched out in a line facing the audience — blocking the panel members, including Smith and Baldwin, from view.

Initially, Mac Dems invited Sunrise to co-facilitate the event under the impression it would be a roundtable discussion during which students would be able to ask the senators questions and contribute to the discussion.

But, according to Marquardt, the Smith campaign informed Mac Dems that it would instead be a moderated panel and that questions from attendees would be screened.

At that point, Sunrise ceased its official involvement with the the panel and instead began to think about disrupting it as a way to confront Smith and Baldwin about their stances on fighting the climate crisis.

Smith, who grew up in New Mexico and came to Minnesota to work in marketing at General Mills, has had a long career in DFL politics that included a stint as chief of staff for former Gov. Mark Dayton. Later, Smith served as Dayton’s lieutenant governor during his second term in office.

In January 2018, after then-Sen. Al Franken (D-MN) resigned amidst multiple allegations of sexual harassment, Dayton appointed Smith to the Senate.

Smith easily won a special election that November to fill the remainder of Franken’s term and is now running for her first full term this year. She does not have serious primary opposition and is expected to face former Rep. Jason Lewis (R-MN) in the general election.

Last Friday’s event was designed to engage students in Smith’s re-election effort. Instead, it turned abruptly into a referendum on her refusal to support major progressive goals ranging from stopping the construction of the Enbridge Line 3 oil pipeline to rejecting fossil fuel money.

Smith, Baldwin and Cantrell all thanked the Sunrise representatives for their concern — Smith offered to meet with them after the conclusion of the event — and then encouraged them to vacate the front of the room and allow the panel to continue.

The protesters held the front of the room for about eight minutes. When Sunrise eventually stood down, they walked out of the boardroom chanting “Green New Deal.” Macalester Public Safety locked the door behind them.

The Sunrise representatives were not impressed.

“Our experience with these officials is that they say, ‘Let’s start a dialogue,’ and they use the terms of that dialogue to sidestep the thing that you want to talk about,” Dakota McKnight ’22 said. “Sunrise’s general strategy is to do public confrontations and raise consciousness in audiences.”

“There are different ways in which people in power can be condescending,” Marquardt said. “In this instance, it was this classic thing you get from Democrats which is, ‘I’m with you, I feel you, I’ve been there before… but I don’t want you to do it.’”

McKnight and Marquardt said that while individual Sunrise members may choose to vote for Smith, the organization as a whole will not mobilize to support her candidacy.

Apart from the Sunrise disruption, the panel focused primarily on mental healthcare and healthcare for young people. Smith was not asked to explain why she, unlike both Baldwin and Franken, does not support Medicare for All.

Pressed after the event by Sunrise member Emma Bassett ’23 on her refusal to back the Green New Deal, Smith stood firm.

“I am taking bold action in a variety of different ways because I know how important it is,” Smith said. “The bold action I am taking [is] around getting to net zero carbon emissions in the electricity sector, in what we can do in agriculture.

“My view of [the climate crisis] is that there is not one answer to this solution,” she continued. “It requires broad solutions — and I’d like to join in solidarity with you on that idea.”

Baldwin, who has not signed onto the Green New Deal either, spoke in similar terms.

“There is so much overlap and agreement,” Baldwin said of the Sunrise protesters. “I think that we have to have involvement in all sorts of matters — whether that is demonstrations, education forums, etcetera, or what we do at the legislative level. It is an issue on which every person can make a difference.”

After taking a photograph with the other panelists and shaking a few hands, Smith and Baldwin were ushered out of the room by their campaign staffers.

In the lobby, Smith stopped briefly to talk to Marquardt and McKnight. Marquardt said that she thanked them for their action and reaffirmed her intention to meet with the group in the future.

Students from the University of Minnesota also asked Smith and Baldwin for their stance on a separate matter — whether the Democratic presidential candidate with the most delegates heading into this summer’s convention in Milwaukee should become the party’s nominee.

The issue has become contentious in recent weeks as all of the Democratic candidates save for Sen. Bernie Sanders (I-VT) have said that the person with the most delegates, if that person does not have an outright majority, should not necessarily be nominated.

Superdelegates like Smith and Baldwin can vote on a second ballot at the convention, but not on the first ballot — and neither would commit to backing the candidate with the most delegates if they did not have an outright majority.

“What [Smith] told me was, essentially, they shouldn’t,” U of M junior Sean Lim said. “That… the rules have been written, and so we should follow the rules. She also said that it was actually Senator Sanders who was pushing for these rules in 2016 — and that’s categorically untrue.

The only politician who seemed to be popular among the activists was Cantrell. Unlike Smith and Baldwin, Cantrell has signed onto the Minnesota version of the Green New Deal and Sunrise said they’d be interested in working with him on policy.

After the event, Cantrell congratulated Marquardt and McKnight on their protest — but later expressed his sympathy for the senators to The Mac Weekly.

“I thought [the senators’] responses were appropriate,” Cantrell said after the Sunrise activists had left. “I thought they had very cogent and sound responses.”