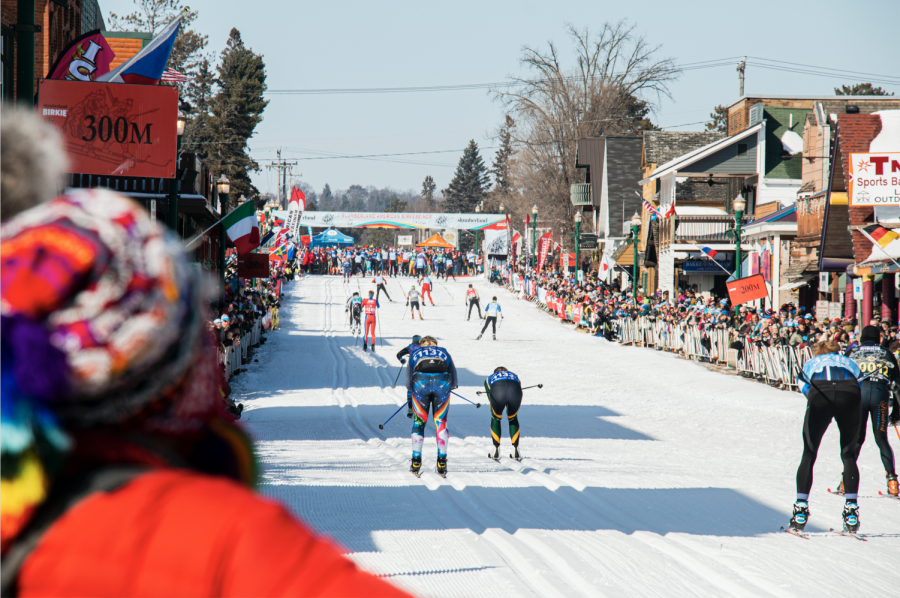 The finish line of the Birkebeiner in Hayward, Wisconsin. Photo by Celia Johnson '22.

As the skiers raced to the finish, they were greeted with a chorus of cheers and cowbells from the many spectators of the 46th Annual Slumberland American Birkebeiner. The Birkebeiner, or the Birkie, as it is known to many, is a ski race from Cable, Wisconsin to Hayward, Wisconsin, one of the longest cross country ski races in North America. There are over 10,000 participants every year in the race, making it the largest North American ski race in terms of participation.

The Macalester Nordic Skiing club sent about 20 skiers to the event, held on Feb. 22. Most raced in the 50 km freestyle race, while four skiers raced in the 55 km classic race and a few raced in the shorter races.

The nordic club skiing is not super competitive, and commitment is independently determined.

“As far as the club here it’s pretty casual and informal, people can kind of make of it what they wish,” Jojo Baldus ’20, one of the four captains of the team, said. “But we don’t have workouts as a team. It’s basically just a way to get people out and skiing, whether they’re new to it or have skied all their lives.”

Baldus, who also ran cross country in the fall, prefers skiing to running, though he enjoys both.

“Skiing has always kind of been my thing and main sport and love,” Baldus said. “But I also love running and even run in the winter.”

Danielle Freshwaters ’22, who skis and runs track and cross country, enjoys both running and skiing “equally.”

While the Nordic team races in several events each year, the Birkie is one of the most popular.

“[The Birkie]’s kind of the big one at the end of the year, like the culmination of our season,” Freshwaters, another captain of the team, said.

Freshwaters, raised in Tacoma, Washington, began skiing with her family as a child, though she had never raced before coming to college.

“When I came to Mac, I was really excited there was a club [nordic] team, because I wanted to have that racing experience and try something new,” Freshwaters said.

She also runs cross country and track for Macalester, so she enjoys skiing because she doesn’t have the same expectations of herself. It is also a way for her to get outside and enjoy the winter in Minnesota.

Baldus also began skiing with his family when he was younger. His grandparents actually own a cabin in Cable, where the Birkie begins. His grandfather raced in this year’s Kortelopet, a 29 km race held on Feb. 21, making him the oldest participant of the 2020 Birkebeiner. For Baldus, skiing was always a family event.

All three skiers met their goals, aided by the conditions.

“The weather was really nice this year, the snow was fast, so it was just a really positive atmosphere,” Freshwaters said.

Many skiers get ‘Birkie Fever’ from the excitement of the race and want to come back.

As skiers finish the race, they must climb up a final hill before they finish along Hayward’s Main Street, where spectators form a crowd.

“From the top of the bridge, you can see Main Street lined with people on either side,” Liberman, a first-time Birkie skier, said. “I’ll also never forget the moment, reaching the top of the bridge and seeing the finish line maybe 100 yards away with people cheering on each side of the track and hearing my friends cheer me on. That was super, super special.”

Liberman appreciates everything the ski team does to allow newcomers to participate in the Birkie.

“It’s really awesome that the ski team makes it possible and helps out with funding and helped me train for it. [They] gave me equipment to do it and I just feel really lucky to have been able to have the opportunity to accomplish something that was really an awesome goal to have.”