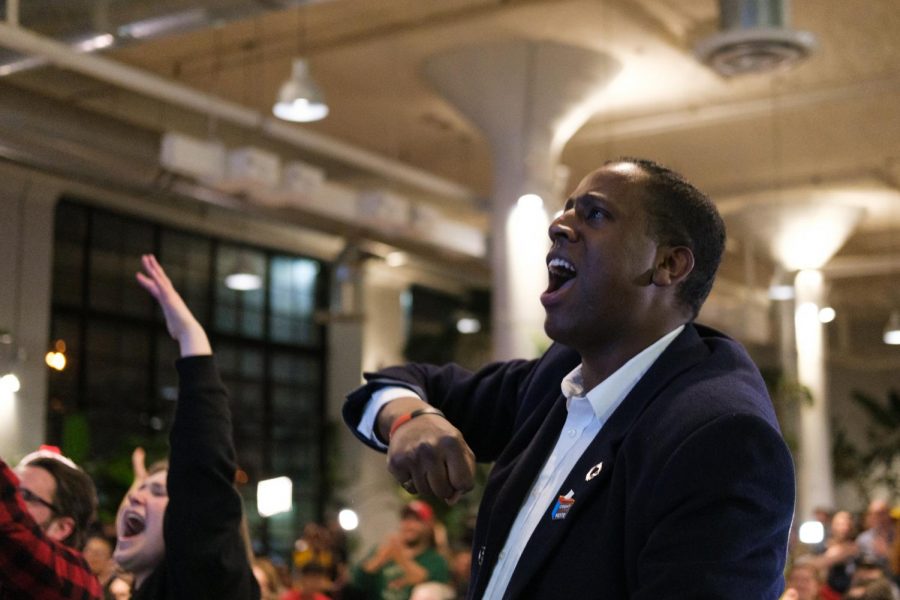 Sanders had been leading his chief opponent, former Vice President Joe Biden, by double digits in some national polls and was projected to beat him in Minnesota.

But what was supposed to be a celebration quickly turned on its head. An hour after the polls closed in Minnesota, the race here was called for Biden. Throughout the night, Biden’s victories mounted — with Sanders winning only in Vermont, Utah, Colorado and California.

When Minnesota’s results were announced, the brewery was quiet — most people sat drinking their beer, dumbfounded. Garrett Schoonover ’19 and Wren Hess ’19 were seated towards the front of the bar, just beneath a giant television projecting the results from CNN.

“I’m just so tired of moderates winning every election, and the biggest problems not being tackled because moderate voters are like ‘Oh no, that will never work,’” Hess said.

The night was sullen — a far cry from what the campaign’s supporters had been hoping for even 24-hours earlier. On Monday night, March 2, 8,000 people crowded into the Roy Wilkins Auditorium in downtown St. Paul to hear Sanders speak.

That night, Sanders fired up the crowd by calling for a “political revolution” and questioning Biden’s ability to win Minnesota and other critical midwestern states.

“Does anybody think that Joe can go to Michigan or Wisconsin or Indiana or Minnesota and say, ‘Vote for me, I voted for those terrible trade agreements’?” Sanders asked. “I don’t think so.”

Minnesota was the only of those states to vote last night, but Biden won it by almost ten points.

But while Biden is now the frontrunner for the Democratic nomination, Sanders supporters remain optimistic that his movement will rebound in primaries ahead.

“I’m optimistically hopeful, but also trying not to let myself get too hopeful,” Schoonover said on Tuesday. “For me… obviously, the most important thing is beating Trump in November. But I [would] obviously prefer a Bernie Sanders nomination.”