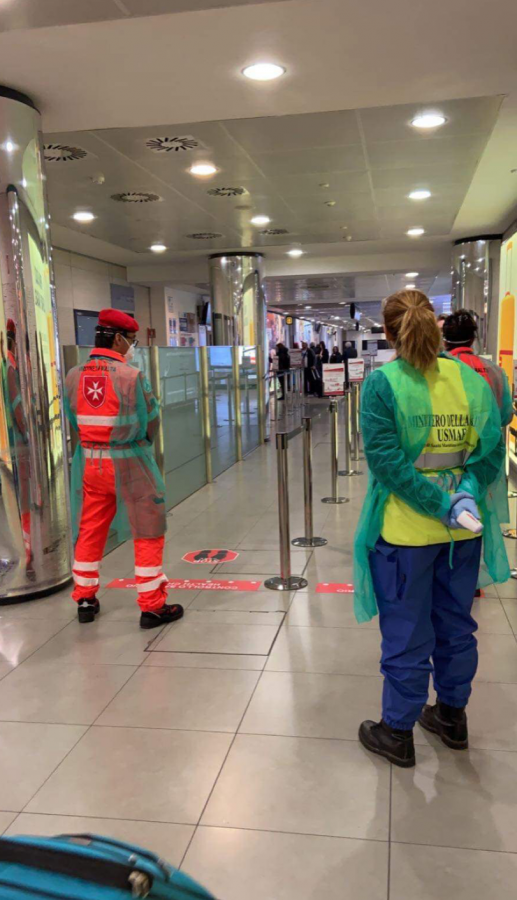 As the coronavirus (COVID-19) continues to spread across the globe, Macalaester is considering recalling students studying away in countries throughout Europe and Asia that are reporting cases.

Liv Gigliotti ’21 is currently studying in Milan, Italy through an Institute for the International Education of Students (IES) program. The Lombardy region of northern Italy has reported more than 2,500 cases of the virus and the Centers for Disease Control (CDC) has declared a level four advisory for the region, suggesting people avoid travel there.

“There’s so much uncertainty and nobody really knows what’s going on or what’s going to happen, and there’s no way to get those answers,” Gigliotti wrote in an email to The Mac Weekly. “We just have to wait and see.

“One minute we convince ourselves that we’re fine and that everything will go back to normal next week, and the next we’re panicking and planning what we’d do if we had to fly home tomorrow,” she continued.

When the outbreak in Northern Italy began, IES planned to continue holding classes as it normally does. But after several days, in an effort to limit students’ potential exposure to the virus and accommodate those who have already returned to the United States, the program began offering all its classes online.

“The news broke on Saturday evening, and by Sunday morning every university and school in the city had decided to close for the week, except IES,” Gigliotti wrote. “The director of the program emailed us Sunday afternoon, saying that they did not intend to follow the protocol of the local universities. People were very upset, myself included.”

The decision to move to an online curriculum came after the Mayor of Milan recommended that schools be closed — a suggestion that IES quickly followed after an outpouring of student and parent frustration. Since then, the Italian government has ordered the closure of all schools and universities until March 15.

“I was really upset for the first part of the week,” Gigliotti wrote. “They took way too long to cancel the week’s classes. There were no updates and no reassurances or statements about the situation, just that classes were online, and then nothing else.”

IES declined multiple requests to comment. Although many of her friends left the program to return to the U.S., Gigliotti is adamant about finishing her semester abroad.

“I feel that this experience is too important to give up just yet,” Gigliotti wrote. “If things develop, and cases keep rising, and it gets more dangerous, then I would return to Macalester. I know that my health and safety is most important. If Macalester decided that they didn’t want me here anymore, I would go.”

Macalester’s Center for Study Away (CSA) is considering making that call. The CSA automatically reviews student situations in countries with level three or higher travel advisories, which Italy has had since early in the outbreak. In Gigliotti’s case, the travel advisory committee relied on information provided by the CDC, World Health Organization (WHO) and a personal appeal emailed to the CSA by Gigliotti in order to come to a decision.

“I keep thinking about the study away application and orientation at Macalester, and how one of the skills they want you to learn is to ‘live with ambiguity,’” Gigliotti wrote. “It makes me laugh. No one is living with more ambiguity than me.”

The CSA has been closely monitoring developments outside of Italy as well. CSA Director Kevin Morrison has made communicating with students during this uncertain time a priority.

“We’re just responding to a lot of email questions and phone calls,” Morrison said. “Unfortunately, this situation is evolving in such a way that I can’t guarantee anything, but I also don’t want that to create more anxiety… my main message to students is that we’re watching daily, we have really good sources of information and that we will make decisions on a case-by-case basis as needed.”

Several students studying elsewhere in Europe have also been impacted by the outbreak of the COVID-19. Emma Janiszewski ’21 recently travelled to Florence from Copenhagen, where she is studying this semester.

“When we arrived [in Florence], we had to go through this process where people were in hazmat suits and there were these giant signs everywhere that were like, ‘corona, corona, corona,’ or ‘[COVID-19],’” Janiszewski said. “They were taking everybody’s temperature and everybody was dressed like they were on a radioactive site.”

Ultimately, and although her program did not mandate it, Janiszewski ended up flying back to Copenhagen from Florence instead of continuing on to Rome as she had originally planned.

“The day before we were supposed to go to Rome, we got some news that they started to quarantine flights,” Janiszewski said. “We were really worried that we were all going to get stuck in Rome. We ended up eating the whole price of Rome and then buying those next-day tickets, which was expensive.”

Aaron Zou ’21, currently abroad in Brussels, Belgium, also planned on traveling to northern Italy — but changed his plans after the outbreak of the virus and instead visited Naples.

Though fewer cases have been reported in southern Italy, Zou believes he was profiled for being Chinese.

“I didn’t really think about the discrimination until I traveled to Italy,” Zou said. “In the south, especially the city I went to, there was a lot of discrimination going on.”

Zou saw people were covering their mouths as they passed him on the street, but did not attribute it to his nationality at first.

“While I was traveling and sightseeing, there was a man that was yelling at me,” Zou said. “Things like this happened, and I guess I just didn’t piece it together because it didn’t occur to me [that] ‘this is because of the conoranvirus.’”

Traveling throughout Amsterdam and living in Brussels where his program is based, Zou hasn’t experienced similar treatment. But his time in Naples made him aware of the misconceptions about Chinese people in response to COVID-19.

“They see me and they think, ‘oh, a Chinese tourist probably from China, bringing coronavirus to my country, or my community, or my neighborhood,’” Zou said. “There are definitely people that could blame me for being from the country which they perceived could [have] started the epidemic.”

Macalester is attending to the crisis on campus as well. The recently formed Infectious Disease Task Force, led by Medical Director of the Laurie Hamre Center for Health and Wellness Dr. Stephanie Walters, has stressed the importance of dispelling myths that could harm members of the Macalester community.

“For most people with COVID-19 it will feel no different than a cold or flu,” Walters wrote in an email to The Mac Weekly. “My efforts are focused on thoughts like the societal and community impact. It will be inconvenient, and expensive, and challenging and constantly changing, and different communities and identities and vulnerable people will feel it differently.”

The task force includes representatives from ten campus departments and offices, including Health and Wellness, the CSA and International Students Program.

“We all have different lenses and expertise and it was important to get all of those in the same room to start collaborating,” Walters wrote. “It is also important to note that our team in the Hamre Center for Health & Wellness has been monitoring the coronavirus situation since late 2019 and we have been closely following developments and recommendations from the WHO and CDC.”

The group will continue to monitor the situation and plans to meet four times before spring break and at least weekly for the remainder of the semester. The task force is also working closely with the Incident Management Team, which oversees campus preparedness for a myriad of disaster situations.

“This is purposely not named ‘Coronavirus Task Force’ because although we don’t yet know what specific impact of COVID-19 on our campus will be, we know this type of planning is always relevant for the campus community,” Walters wrote. “We can use our preparedness now and in the future, as the spread of infectious disease is an ongoing challenge for all in higher education to be thinking about.”

The CSA is also thinking to the future— and is already discussing the impact the virus might have on students planning on studying away in the fall . Morrison stressed the importance of contingency planning.

“We want to make an informed decision and we want to have a plan in place,” Morrison said. “At this point in time, our program providers in places like China, Italy, South Korea, are planning on offering academic programs in the fall semester. We are moving forward with cautious optimism.”

“First and foremost, take a deep breath, and remember that ‘pandemic’ describes a disease’s spread, not its severity,” Dr. Walters wrote. “Having some fear of this unknown is natural, but we all have to do our best not to let the fear control us.”