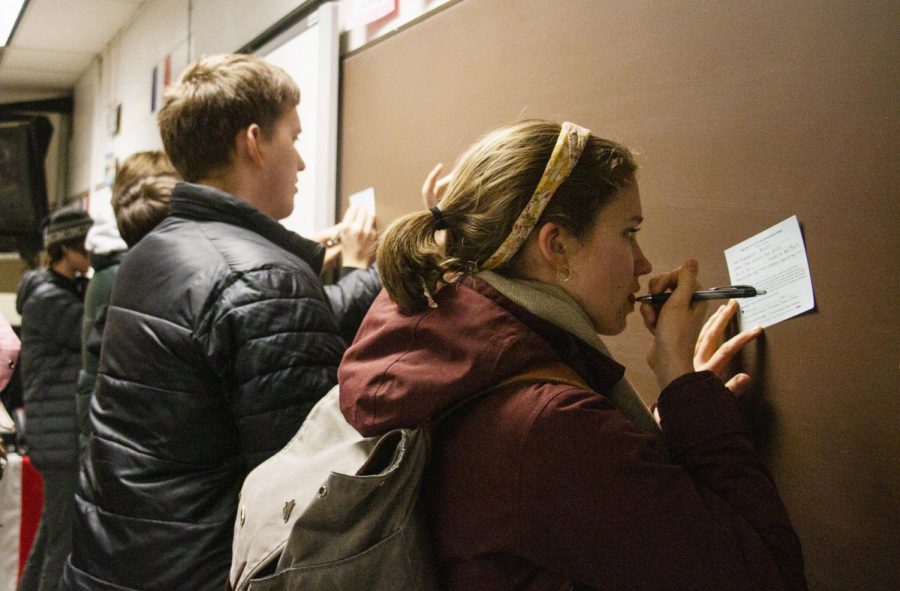 Paul O’Connell ’22 and Margaret Breen ’20 at the precinct caucuses on Tuesday. Photo by Celia Johnson ‘22.

Sixteen of those participants were Macalester students, and almost as many people in the room were first-time caucus-goers.

Tuesday’s event was the first step in Minnesota’s months-long caucusing process, which begins at the precinct level — where delegates are elected to represent their community at a subsequent convention encompassing their entire state senate district.

The caucus at Central was convened by Don Arnosti, a local DFL volunteer, who began the night by offering his “enthusiastic” greetings to the participants and passing a “hat” around the room to raise money for the DFL. The “hat” in question was actually a manila envelope with a sticker of a hat on it.

Arnosti asked people to introduce themselves and share how long they have lived in the precinct. The number of Macalester students introducing themselves drew laughs from the older caucus-goers, many of whom have been attending this particular caucus for decades. One woman said she had only missed one caucus in the precinct since 1984.

People also shared what issues had motivated them to caucus this time. Many wearing yellow buttons were visibly part of the statewide “Caucus for Climate” initiative — a joint project of a number of environmental and social justice organizations across the state — and spoke about their desire for the state to work for climate justice.

The initiative aimed to turn out 10,000 people across Minnesota to elect delegates who will get the DFL to commit to climate justice goals in its party platform and endorse candidates who will act on the issue.

The caucus then elected a Precinct Chair and Vice-Chair, who help organize the Senate District Convention. Although this spring’s senate convention is on Sunday, March 15 — during Macalester’s spring break — Arnosti specifically asked if any Macalester students wanted to run.

Despite the inconvenient timing, Amelia Ernst ’23 and Tommy Navarre ’23 ran and were elected unanimously as Chair and Vice-Chair respectively.

“I think it’s important to be involved in very local politics, because a lot of the reason most of us don’t feel represented by people who are representing us at higher levels is because local politics is seen as something that isn’t as important,” Navarre said.

In addition to electing 27 precinct delegates, caucus-goers could submit and vote on resolutions that signal support or opposition for given policies. If the resolutions pass, they too move on to the next stage in the caucusing process with the ultimate goal of making it into the party platform.

Meanwhile, Maria Arreola ’22 supported a resolution calling for an immigrant bill of rights that would allow undocumented people to get state driver’s licenses, and Aaron Woida ’22 spoke in favor of a resolution supporting the right of all citizens, including incarcerated citizens, to vote. All passed unanimously.

Throughout the night, caucus proceedings broke for brief speeches from politicians and their surrogates.

Representatives from Sen. Amy Klobuchar (D-MN) and Mayor Mike Bloomberg’s presidential campaigns stopped by to ask caucus-goers to support their candidates in next week’s presidential primary, while former State Rep. Erin Murphy, who used to represent Macalester in District 64A and was a candidate for governor in 2018, pitched her run for State Senate.

Running unopposed to replace retiring Sen. Dick Cohen, Murphy said she’s “knocking on wood” that she’ll be the precinct’s next Senator and said that it was time for new blood in the Senate. As she left the room, her successor as District 64A Rep., Kaoly Her, arrived, and the two hugged in the doorway.

Her thanked the caucus-goers for attending and talked about her work during her first term fighting for affordable housing and tenants’ rights. She asked for people to support her re-election bid and said anyone who wants to should meet with her.

“My door is always open. I literally meet with every constituent that asks to meet with me,” Her said.

While people were proposing and voting on resolutions, St. Paul Mayor Melvin Carter made an appearance. He waited in the hallway with his daughter Naomi, as Joseph McMurtrey ’22 proposed a resolution that would ban assault weapons and Woida submitted one supporting automatic voter registration.

Carter, who attended Central, thanked people for electing him in 2017. He talked about what his administration has done thus far, highlighting its work to raise the minimum wage and support College Bound St. Paul program, as well as its work attempting to tackle poverty and homelessness in the city.

“I know some of these changes make us feel uncomfortable, and I’m proud of that,” Carter said.

While he was waiting to enter the classroom, Carter bumped into Alex Jacobsen ’22 — a first-time caucus-goer and precinct captain for Murphy.

“I actually bumped into Mayor Carter while frantically searching for a bathroom — he was the first person I ran into, and I didn’t recognize him,” Jacobsen wrote in an email to The Mac Weekly. “After I realized it was the Mayor, (I’d asked) I was very embarrassed, of course. I thought he said some very good things when he spoke to the caucus room though.”

Despite the ways that caucuses connect participants to the political process, they are themselves largely inaccessible. People who work during a caucus, have small children who need childcare or have accessibility needs often cannot participate.

One of the ways that manifested itself at Ward 3, Precinct 7’s caucus was that the caucus-goers — including the Macalester students — were predominantly white.

“I just think that it made me wonder how would the discussions have been different [if there was more diversity],” Amelia Gerrard ’20 said.

The caucus ended with a presidential straw poll won by Sen. Bernie Sanders (I-VT) on the strength of votes from Macalester students, and with older participants offering the students rides home if they needed. The students who could participate seemed empowered by the occasion.

“I think local politics is where the most change happens because you have the most say at local levels,” Ernst said.