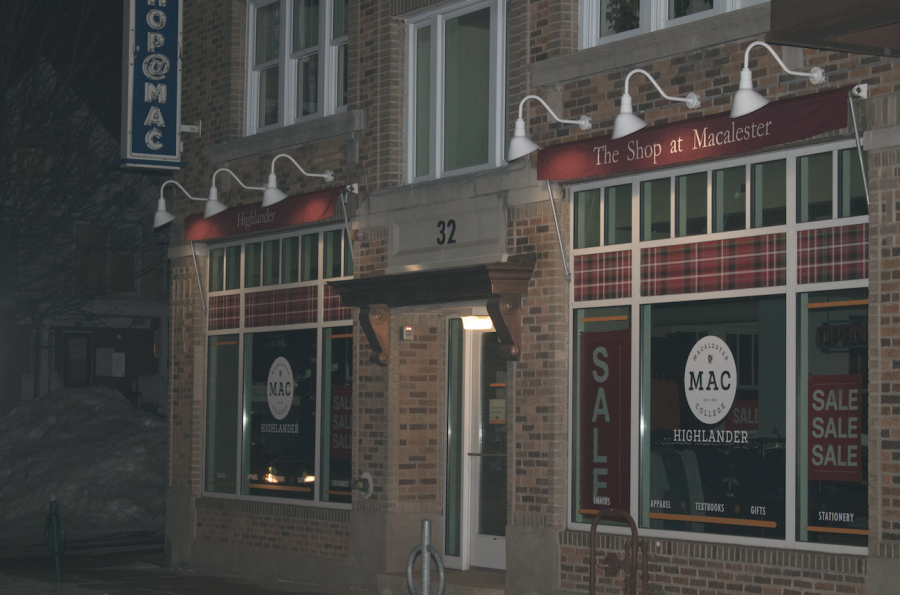 The Highlander. Photo by Bergen Schmidt ’22.

Highlander: The Shop at Macalester is changing hands this semester. On March 14, the college’s current bookstore vendor, Follett, will begin to vacate the Highlander to make way for the store’s new management company, Barnes & Noble College.

Business Services announced the transition in the Mac Daily on Oct. 15, 2019, and now, with just two weeks remaining until the last day of sales, the store is hollowed out.

Only about half of the shelves, usually packed with novels and textbooks, remain full. Bright red sale signs — 50 percent off and 75 percent off — hang in the windows and perch on top of racks of grey and navy blue sweatshirts. In the register line, a group of students carrying armfuls of Mac-branded blankets and t-shirts waits to check out.

Follett assumed management of the Highlander in October of 2012, becoming the first outside vendor to oversee Macalester’s bookstore. Before they arrived, the college ran the shop itself and outsourced book sales to a local store — Hungry Mind.

Follett initially agreed to a five-year contract with the college, which has been re-upped every year since it initially expired in 2017. But despite their nearly eight-year partnership, Macalester was never satisfied with how the bookstore was run.

According to Associate Vice President for Finance Patricia Langer, the Macalester-branded merchandise was a particular point of tension. The clothes and other items produced by Follett were too “cookie-cutter,” and students and alumni weren’t buying at the rates the college wanted.

“We’ve been working with them ever since I’ve been at Macalester,” Langer said. “They’ve struggled with hitting the mark with anybody in our community.”

There are only two competitive vendors working in college bookstores: Follett and Barnes & Noble College, the latter of which split from the retail bookstore chain Barnes & Noble in 2015.

When they assume control of the bookstore next month, Barnes & Noble College will implement a store manager with direct control over the college swag — ideally creating designs more tailored to the community.

In addition, Barnes & Noble College offers a portal for faculty to check the price points of books they’re planning to assign and a better-publicized price match guarantee.

“I want to emphasize this is very student-focused,” Langer said. “This has been a long-standing improvement goal; the decision was not made in haste.”

But even as the college celebrates the transformation, the shift has unsettled several longtime employees.

According to Starr, the process of transitioning to Barnes & Noble College has been opaque to store employees. They found out that Macalester was terminating their contract with Follett on the same day the rest of the community did: Oct. 15.

Starr would like to stay at the Highlander, but she and any other employees who want to transition to Barnes & Noble College have to reapply for their jobs. Starr was granted an interview with the new company, but, as of last Friday, was still waiting to find out whether she has been hired.

This is a pivotal moment for Starr. Her family relies on her job at the Highlander for their health insurance, and if she isn’t rehired, she’ll have to find another job that will offer her benefits.

Not only that, but she loves selling books — and she’s been selling them in partnership with Macalester for over 30 years.

“Although my family assures me I could do something else, it’s just a little hard to imagine it,” Starr said. “There are things about retail I’m not really happy to ever have done, but I like selling books and I like getting books and finding books for people. That’s my favorite thing to do.”

Her dedication to her job has not gone unappreciated by the Macalester community — particularly the faculty.

“We have confidence in [Starr] and she understands our needs,” anthropology professor Arjun Guneratne said. “And she’s worked for years and years at the college.”

Over the years, faculty have proven loyal supporters of Starr.

In November 2013, Follett laid off nearly 400 of their workers nationwide after the company’s then-CEO Mary Lee Schneider determined that it needed to pursue a new employment model. Starr was one of those workers, but she wasn’t out of a job for long.

Following the announcement, more than 150 faculty, including Guneratne, signed onto two different letters protesting Starr’s termination and urging Follet to rehire her.

“We [the faculty and staff] came to rely on Carey’s excellent service,” one of the letters reads. “It is the presence of colleagues like Carey Starr on the staff that has made this college a congenial place to teach and to do research.”

By the end of the month, she had her job back.

Now, with Starr’s future up in the air again, Macalester is claiming that it has little control over the Barnes & Noble College hiring process.

“Our position has been we want the best person in the store for the Macalester community,” Langer said. “We don’t have control over who they hire or who they don’t hire… that’s not in our contract with them.”

The subject did come up in a meeting with faculty, administrators and Barnes & Noble College representatives.

“At this meeting, I did mention that when the previous transition to Follet occurred, Carey’s employment was of concern to some faculty,” Vice Provost and Associate Dean of the Faculty Paul Overvoorde wrote in an email to The Mac Weekly.

Even with the future uncertain, Starr’s main concern is that the students get their textbooks while they still can.

“That’s my main fear: the textbooks — that’s all I really care about,” she said. “I just want people to know that if you walk in here March 13 looking for the next book in Jim Dawes’ class it’s not going to be here.”

Langer did say that while Macalester ultimately cannot make hiring decisions for Barnes & Noble College, the company is particularly interested in bringing on Macalester students to work in the store. Those positions are not connected with work study, but they are hired independently.

Last Thursday, they followed through on this interest — hiring Olivia Hitchcock-Willis ’22 who has worked at the Highlander since fall 2019.