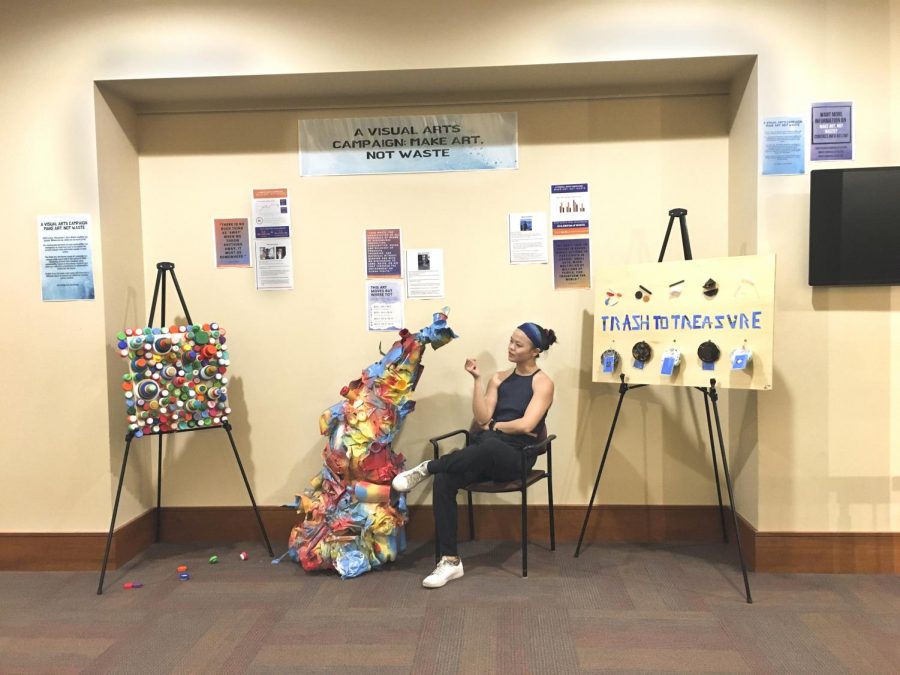 Quinn Rafferty '20 poses with the first set in the CC Atrium. Photo by Maggie Wick '22.

Two weeks ago, a pop-up art exhibit made its first appearance in the atrium. Last week, sightings of a larger exhibit were reported in the Smail Gallery of Olin Rice. On Feb. 17, it vanished, only to reappear in the basement of the Campus Center. The moving and morphing display of art undoubtedly caught many students’ eyes and attention, so I decided to track it down.

The first discovery made was that this is not a supernatural anomaly, but an organized project entitled “Make Art Not Waste”. By the time “Make Art Not Waste” reaches its final destination — an evening reception in Janet Wallace Commons on March 2 — it will consist of seven sustainability-inspired artworks, all created by Macalester students. The art spans a full range of mediums, from spray paint and recycling, to circuit boards and wire, to the more traditional paint on canvas. Every artwork is accompanied by an artist’s statement that explains their personal connection to sustainability.

But how was this project created? And how does it teleport around campus?

Intrigued by this moving and morphing display, I met with Quinn Rafferty ’20, Maggie Wick ’20 and Rachel Percy ’22, the three students responsible for this initiative, in order to understand how it came about.

The idea was devised in Spring 2019, with all three thinking about how best to get students engaged with Macalester’s Zero Waste 2020 goal. As Macalester is not going to reach their goal — 90 percent of waste diverted from landfills — Percy, Wick and Rafferty felt that it was important for students to carry on this mission even after the target date.

“Just because Zero Waste by 2020 is over, it doesn’t mean that Macalester stops trying to be zero waste,” Rafferty said.

Percy recalls staring at a blank wall in the atrium, thinking “Wouldn’t it be cool if we had something up there that talked about the upcoming zero waste goal? It would help inform people about that goal but also keep them dedicated to sustainability.”

However, the goals for the exhibit are much larger than just visibility.

“My biggest hope was to bring life back to the word sustainability,” Percy said. “My worry is that sustainability is so entrenched in the institution that everyone thinks, ‘I’m a Macalester student, of course I have to be conscious of my waste.’ I hope this [project] makes people think about ‘What’s my own motivation to care about this?,’ and I think using art as the platform makes [sustainability] interesting again.”

Yet “Make Art Not Waste” was not initially connected to visual arts at all.

“It was going to start as a survey, like surveying dorms, but we ultimately came to the decision that that’s been done before, and that it doesn’t reach everybody,” Rafferty explained.

Then, inspired by a discussion on how visual arts combine with environmentalism in Professor Christie Manning’s environmental justice course, Rafferty and others decided to take a different direction.

“This is a more unique way to go about spreading our message.,” Wick said. “I don’t think it’s ever been done before at Mac.”

Once Rafferty, Wick and Percy had the idea, they needed institutional support, funding and artists. From the beginning, they realized that paying the artists for supplies and their time would help remove financial barriers to participation and make it more accessible to everyone. Therefore, funding was essential. They applied to the Small Projects Fund through the Sustainability Office and were approved. However, the project needed to be tied to a department.

“Quinn and Maggie were both student workers [in] Facilities [Services], so it just seemed natural to house the funds there,” Percy said.

In fact, Rafferty’s work as the data manager in Facilities Services was a driving influence on the project. All three feel as though the data and information about Macalester’s progress towards Zero Waste is only reaching people in the departments that directly deal with it. They are hoping to reach a wider audience, and hear ideas from a larger portion of campus.

“We were always working with sustainability and with facilities, so we already see the perspectives that were there, so it was refreshing to see [students’ perspectives] when the pieces came in,” Wick said.

The next step was finding locations for the project; they worked with Robert Hernandez, Reservations Manager, to figure out where the exhibit would go. They knew early on that they did not want the artwork to stay in one space. Wick said that by having it bounce around campus, they were hoping to “maximize the amount of people seeing it and interacting with it, and continue to draw attention to it.”

Finally, they had to find artists. The application was posted to Facebook and to the Mac Daily. In the end, they received more applications than they were initially expecting.

“We were really excited to have as many applicants as we did,” Wick said. “I think with projects like this, it can be very hit or miss with who you are going to have applying, what interest you are going to generate, so it was cool for us to have that many people willing to commit their time to create these pieces.”

Now in the presentation stage, all three organizers have been able to reflect on the process and outcomes a little more. Seeing people interact with the artwork and consider how art and sustainability intersect with one another has made this long process worth it for them. As for organizing the exhibit, they found a significant amount of support from the Sustainability Office, Facilities Services and professors across campus, but it was their responsibility to see this initiative realized.

“It made me realize how many steps you have to go through to make an idea become a materialized project,” Percy said.

“People who care about something have to be the ones to push the institution to support it,” Rafferty said.

For those of you still wondering how the art performs its magical disappearing act, that’s the work of Rafferty, Wick and Percy as well.

You can catch a glimpse of “Make Art Not Waste” in its final location, Janet Wallace Commons, starting Feb. 24.