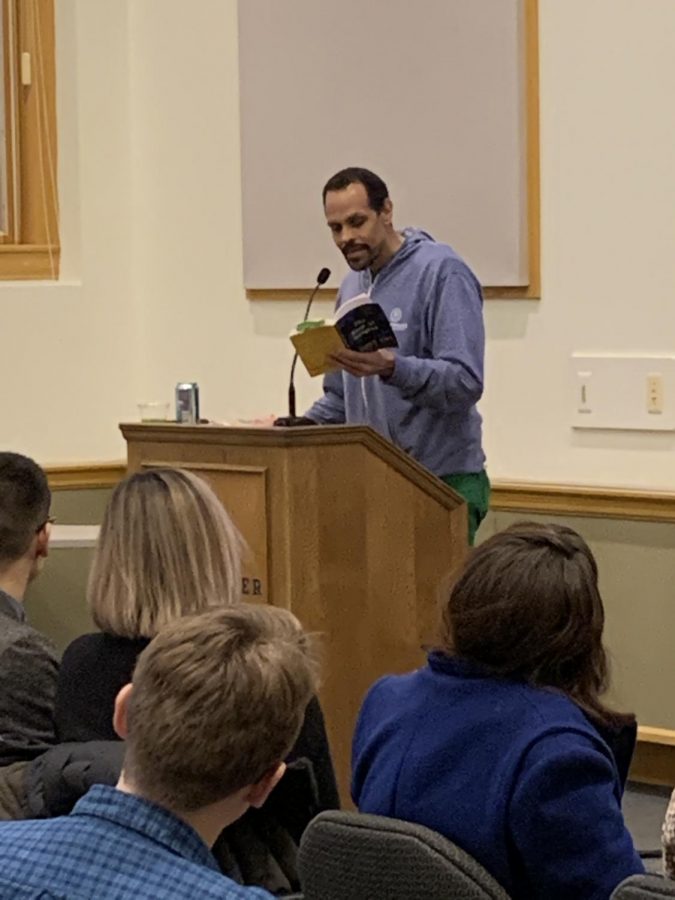 “Everything sells better than poetry,” author Ross Gay joked during a conversation with Macalester students last week. Gay, an award-winning poet and essayist, was invited by the English department to give a reading in the Weyerhaeuser boardroom on the evening of February 5. Earlier that afternoon, he held an informal discussion with about 10 students in Old Main’s fourth floor lounge.

“I’m here for you,” Gay told the room, then asked everyone to describe something beautiful they saw that day. He had an easy warmth and effusiveness, seeming visibly interested in the group’s responses.

The author was charmingly humble, too. At one point, he exclaimed, “If anyone ever knows a poem of mine, I’m blown away!”

A founding member of Bloomington Community Orchard, a non-profit sustainable-living project in Indiana, Gay is a strong advocate for food and social justice, which is often reflected in his writing. A student brought up his 2015 collection of poetry, “Catalog of Unabashed Gratitude,” and inquired about whether he thinks gratitude can be productive or even political. Gay gave an enthusiastic “yes,” noting that gratitude helps us celebrate our interdependence and, in turn, serves to combat cultural norms of cut-throat individualism.

“Implicit in gratitude is that we require one another,” he said. “If we gather around what we love […] it feels profoundly […] radical to me.”

Gay said that some people assume the bold optimism of the title “Catalog of Unabashed Gratitude” to be ironic, but that he meant it earnestly, as “an unabashed gesture… not like, actually, everything sucks.”

When asked for advice on how to overcome writer’s block, especially for poets, Gay suggested doing exercises that demand adherence to a strict form.

“Work[ing] within mechanical constraints,” he said, can be surprisingly freeing. “You’ll be out of control and magical things will happen.”

“So much beautiful art comes from the accidents,” he told students.

Stressing the value of being open to new experiences, he urged the group to embrace wonder. “Real learning happens when […] you realize, I’m never gonna know any fucking thing.”

Answering a question about his writing utensil preferences, Gay revealed his fondness for the Le Pen brand and passed a few of his mini notebooks around the circle, encouraging students to feel their glossy covers.

Several hours later, a crowd of faculty, students and community members gathered in Weyerhaeuser to hear Gay read from “Catalog of Unabashed Gratitude” along with his latest collection of essays, “The Book of Delights,” published in 2019.

Much of Gay’s work focuses on an idea that he says he will likely study for the rest of his life: joy. To write “The Book of Delights,” Gay challenged himself to reflect on one delightful moment every day for a year. The result was 102 short, witty and joyful essays on topics ranging from hummingbirds to tomato plants to peeing in a parked car.

Audience members certainly laughed during the reading, but many also cried. “The thing that particularly resonates with me in this book is that you can’t have this kind of delight and joy without the sadness,” Katie Hopper ’95 said.

Bunched and rolled up in beautiful descriptions, moments of mourning and reflection peek out from Gay’s writing. Before reading the poem “Spoon” from “Catalog of Unabashed Gratitude,” Gay paused to ask his listeners if anyone knew Don Belton, a former Macalester English professor and close friend to Gay, who was murdered in 2009.

It’s this emotional openness that makes Gay’s writing so accessible. In “Spoon,” he tells his readers that “I swore when I got into this poem I would convert / this sorrow into some kind of honey with the little musics”– as if writing can heal the poet.

Likewise, reading can comfort the bibliophile. Before the reading began, Hopper and her friend Laura LaFave considered how Ross Gay’s work has impacted them.

“Laura knew I needed this book,” Hopper said. “I’m having a really challenging time right now. It was exactly what I needed to reframe and find the delight in the little things.”

The two fans described a connection to Gay that goes beyond the typical artist-audience relationship.

“Don’t you just want to hug him?” Hopper asked.

Hopper and LaFave aren’t alone in this feeling. Professor and English department chair Andrea Kaston Tange introduced Gay to his audience, remarking that she had to restrain herself from using his first name because, having read his work, she already felt like one of his close friends.

After he finished, Gay was met with a long line of people eager to convey their appreciation for his inspiring words. In a mere hour and a half, the author managed to lift the collective mood of the room and leave the Macalester community just a bit more joyful.