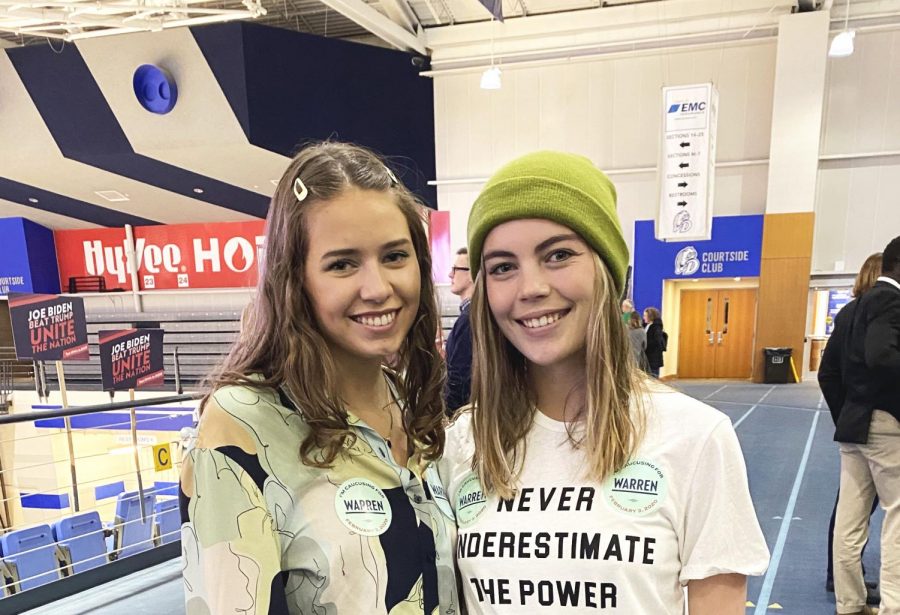 When Iowa conducted its quadrennial first-in-the-nation presidential caucus last week, Macalester students from the Hawkeye State found ways to participate either at home in Iowa or at a “satellite caucus” site at the Martin Luther King Recreation Center in St. Paul.

Louise Bequeaith ’23 attended the St. Paul satellite caucus and caucused for Bernie Sanders. She had attended caucuses before with her parents and as a volunteer but found the experience far different as a voter.

“I knew how it worked and it was interesting to actually be a part of it,” Bequeaith said. “But it’s also kind of frustrating that you’re just like ‘Oh, I just stand here.’ You actually do more as a spectator.”

At each precinct, caucus-goers group themselves by candidate preference, known as the “first alignment.” Candidates who fail to receive support from at least 15 percent of those in attendance are deemed “non-viable” — which means they cannot gain delegates, the metric used to determine a statewide winner — and their supporters can choose to support a different candidate during the “final alignment.”

The vote counts from the final alignments across Iowa are used to determine how many delegates each candidate will receive at the Democratic National Convention this July. For the first time ever, the Iowa Democratic Party operated 87 “satellite caucus” sites around the world for voters unable to be in-state on caucus night.

Bequeaith found the St. Paul caucus well-organized, a stark contrast to the reports of chaos and dysfunction in Iowa.

“It ran very smoothly, but I would attribute that to its really small size,” Bequeaith said. “I think a lot about my parents where they had 600 people and it took three and a half hours. We were there for an hour.”

Brennan Drake ’22 traveled home to Iowa to caucus in her home precinct, which had over 800 attendees. Despite the large turnout, she didn’t experience logistical issues.

“Ours ran really smoothly,” Drake said. “We were all like ‘This is going great!’ There were no problems, we were done in like an hour and a half.”

She and her family were surprised by the problems in other precincts.

“We went home, ate dinner, turned on the TV, and it was like ‘Chaos in Iowa!’” Drake said. “And we were like ‘Oh that was not our experience.’”

The number of caucus goers varied by precinct, which had an effect on how the realignment process played out. Ariel Roghair ’20 attended the satellite caucuses but caucused in Iowa during the 2016 election.

“In Iowa there were hundreds [of people], here it was just around 30,” Roghair said. “So you actually talked to almost everyone.”

Julia Coelho ’23 also appreciated the intimacy of the satellite caucus.

“I felt a sense of camaraderie because everyone agreed that anyone is better than the current president,” Coelho said. “So there was a lot of trying to convince people, but it was also just exciting to see that people cared about change.”

Drake’s Iowa experience was less intimate — and much louder.

“We were sitting on bleachers so it was harder to convince people walking around,” Drake said. “But once anyone got near our section there were screams and cheers, like ‘We’ll treat you so nice over here!’ It was very spirited.”

Drake hopes the fallout of this year’s caucuses will inspire change.

“I think this is a wake-up  call to Iowa and the country that we should not be the people who have so much importance in determining who our President is,” Drake said.

Coelho supports a shift away from caucuses in Iowa, though she lamented the possible loss of the positive parts of caucusing.

“The conversations make it special,” Coelho said. “When you just go into a booth to check off a box you’re not getting to have those conversations with your town members which I think are really important. But I think there does need to be a change.”

Roghair was less sure about giving up the Iowa Caucus.

“The caucuses are special. It gives people the chance to advocate for their candidate, and that helps you think more about why you’re supporting the person you are,” Roghair said. “I think talking about the ideas and trying to convince other people is important.”

Bequeaith supports switching to a primary and hopes the 2020 caucuses spark broader reform for Iowa Democrats.

“I have a lot of resentment for the Iowa Democratic Party,” she said. “I think they don’t do a great job of advocating for Democrats and they’re not as motivated or as energetic as they could be.”

Despite her dislike of the caucus and the party, Bequeaith appreciates the many volunteers and campaigners who participate in the process.

“I bash Iowa a lot, but I think there’s such great people there,” Bequeaith said. “There are such great advocates and workers, I look up to a lot of them. So yeah, it’s bad, but there’s a lot of great people.”