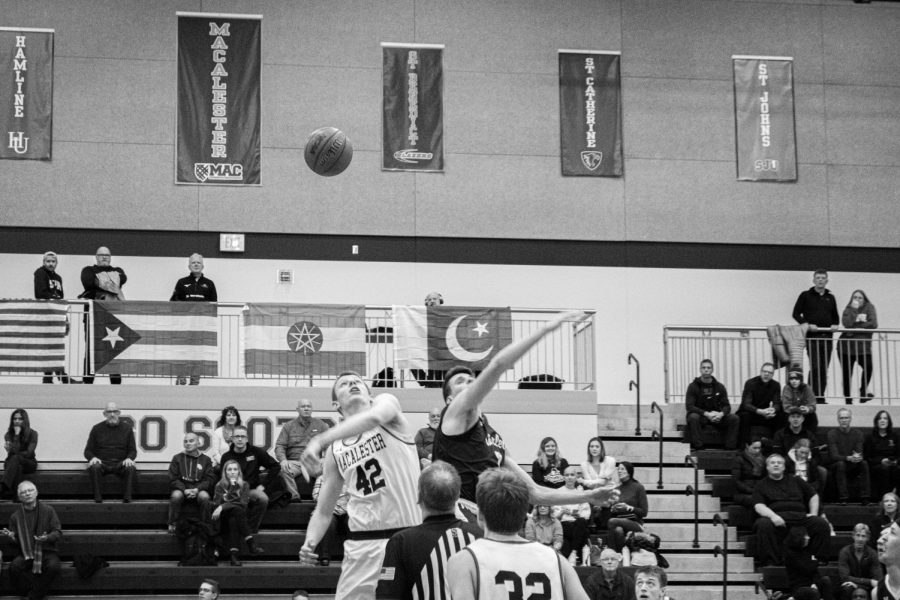 Men’s Basketball head coach Abe Woldeslassie ’08 has three rules for his team: Control what you can control, have passion and be a great teammate.

Woldeslassie, who played basketball when he was at Mac, has high hopes for the Scots: he wants to put the first banner up in the Leonard Center.

Woldeslassie and his team hoped this season would end with a trip to MIAC playoffs, but it hasn’t played out as they had hoped. On Wednesday night, the Scots, carrying a 7-15 record, were mathematically eliminated from playoff contention.

Woldeslassie noted that sometimes, it’s hard to coach when there is such a tangible way to tell how the team is doing in the win-loss record.

“I’m not allowed to have bad days as a coach,” Woldeslassie said.

But he doesn’t dwell on it.

Now in his second year coaching at Macalester, Woldeslassie’s impact is evident in the team’s win total, which jumped from three wins the year before he arrived to seven during his first season. There are still four games left this year, but the Scots have already matched their win total from last season.

At the alumni basketball game on the morning of Saturday, Feb. 8, former teammates spoke highly of Woldeslassie’s leadership.

Holden Bigler-Johnson ’11, a teammate of Woldeslassie’s, said, “[He] was a leader on and off the court, and was always teaching.”

“Abe is the most passionate man about basketball I may have ever met and that shows in everything he does,” Guard Nate Davies ’20 said. “That is like the biggest thing for me, his passion is unmatched.”

That passion has driven members of the team to improve their game in the off-season.

Center Shane Anderson ’22 lost weight over the summer and improved his post moves. He also did extra summer workouts from Scott Hintz, Head of Sports Performance, which “really helped.” That effort turned Anderson into a starter this year after appearing in just five games last year.

The first game he started this season, Anderson was so nervous he could “hardly eat,” but as the season has gone on, he’s “got his flow” and the nerves have subsided.

Guard Lucas Leiter ’22 has also worked hard, transforming from a former walk-on to a starter in the second half of this season.

These stories of hard work are why basketball is so important to Woldeslassie, who looks to teach life lessons through basketball. If nothing else, he wants people who come to games to see that the team is tough, disciplined, selfless and having fun.

“The little things start to add up,” he said.

At practice on Thursday, Feb. 6, before the Scots’ Senior Day game against rival Carleton, Woldeslassie reinforced that idea. After a few mistakes and turnovers in a drill the team was practicing, he interrupted practice.

On Saturday Feb. 8, the Macalester-Carleton game drew a crowd of 553 —  nearly double this season’s average attendance.

“I think it was this collective energy about it… like I can’t describe how much fun it is to be in that environment,” Davies said. “That’s maybe the biggest crowd I’ve seen at Macalester.”

That crowd maintained the atmosphere throughout the game, stomping and breaking out in chants of “DE-FENSE”.

On senior day, every senior starts and Davies wanted to start the game with energy, something the team had struggled with this year.

“I wanted to give us a jump to start the game,” Davies said. “I feel like we’ve had some games this year where we’ve started off kinda flat where we’ve got a deficit to start and we got to battle back.”

Early in the second half, after a controversial foul call, football player Michael Nadeau ’23 walked down the sideline and yelled at the referee about the call. Nadeau was quickly ejected from the game in front of Athletic Director Donnie Brooks and Head Football Coach Tony Jennison. His removal only riled the crowd and the players more.

“It was great just seeing all the fans there, I think that was one of the big things,” Anderson said. “Everyone saw the freshman quarterback get kicked out, and that was awesome. Obviously don’t get kicked out, but just that energy they had. Like Carleton… would make a shot and turn to our crowd and try to shush them and you would hear the crowd react. It was just awesome having that full atmosphere.”

Davies had one of his best games in that senior day game, tallying three three-pointers in the first half.

“It [was] like a dream, you know,” Davies said. “It’s what you go to bed the night before thinking about.”

Although the Scots trailed during the first half, Davies kept the team close. Carleton led 29-28 at the halfway mark.

The Scots played well throughout the game and won 71-60 — scoring a particularly meaningful win over a major rival.

Captains Nikhil Smith ’20 and Mike Babb ’20, both guards, have emphasized all season staying focused throughout games.

“I don’t think we’ve really [played all 40 minutes] a ton this year, but I think versus Carleton we played a full 40 minutes and I think they were proud of that as captains,” Anderson said. “And we all wanted to do that for our four seniors.”

Despite the disappointment of missing the playoffs, the Scots remain focused on building toward the ultimate goal: hanging a banner in the gym. Banners are permanent, and last long after every member of a team leaves the school. It’s something that can’t be taken away.

“Every senior class needs to go out better than they came in,” Leiter said.