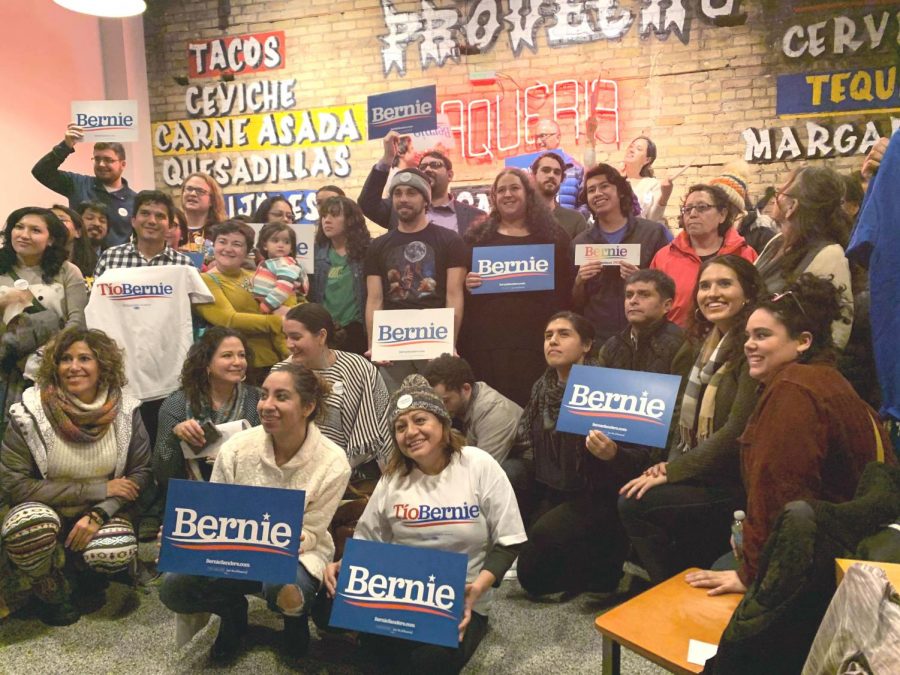 On Saturday evening, members of the Twin Cities’ Latinx community gathered at Prieto Taqueria Bar in the uptown neighborhood of Minneapolis for MN Latinxs por Tío Bernie — an event designed to kickstart Latinx organizing on behalf of Sen. Bernie Sanders (I-VT) ahead of the state’s primary on March 3.

“A group of us Latino community organizers… were all saying, ‘Hey what do we do to engage our community in the Sanders campaign and how do we really get people energized?” Ryan Perez ’20 said.

Alongside Perez, other Macalester students and young alumni, including Alex Young-Williams ’20 and Marco Hernandez ’19, helped with the event.

“In order to move past the climate crisis and in order to really solve it, we have to attack it at its roots, which are capitalism, racism and imperialism,” Hernandez, who also works at COPAL, said. “And Bernie Sanders, out of all of the candidates I’ve seen, really speaks to that.”

The event, boasting about 50 people, began with a short statement from state representative Aisha Gomez (DFL–62B) who represents the Tangletown, Lyndale and Kingfield neighborhoods in Southwest Minneapolis.

“I’m supporting Bernie because of the moment that we are in right now,” Gomez said. “So many people are suffering under the way that the systems are organized right now. We have an opportunity in this moment to make a big change.

One-by-one, community members stood up and shared stories about why they are supporting Sanders, while others listened and clapped along. One of those listeners was Lorna Sherwood Caballero ’18.

Sherwood Caballero did not vote for Sanders in 2016, instead opting for Hillary Clinton. But she has settled on Sanders this time based on his opposition to trade agreements like the North American Free Trade Agreement (NAFTA) and the new United States—Mexico—Canada Agreement (USMCA).

“Over the past four years, [I’ve been] ‘unlearning’ neoliberal politics,” Sherwood Caballero said. “My family’s Mexican-American, so my family in Mexico struggles a lot economically because of these bipartisan politics, like… with NAFTA… that’s also why a lot of people migrate to the United States. They’re economic refugees.”

Thus far, Sanders has had a positive month of February. He won the popular vote in the Iowa caucus on Feb. 3, and then won the New Hampshire primary on Feb. 11.

Moving forward, Latinx supporters of Sanders hope to organize their communities in time for them to make an impact in Minnesota’s primary on March 3.

“I want to be clear that the goal is to have a very strong turnout on Super Tuesday… which is only about 20 days away, so from now until then, our sole set of actions are focused on voter turnout,” Alondra Cano said.

Cano said that Latinx community organizers working on the Sanders campaign hope to turn out one million new Latinx voters across the country.

The event culminated with a networking period, where Executive Director of COPAL Francisco Segovia encouraged attendees to talk to each other and ask for contact information.

As the event came to a close, Segovia and the audience began a rallying cry.

Note: Cano, Perez, Hernandez and Segovia emphasized to The Mac Weekly that their roles at the Minneapolis City Council and COPAL, respectively, are not tied to their work for Bernie Sanders for President.