At House of Hope, a different picture of Edward Neill 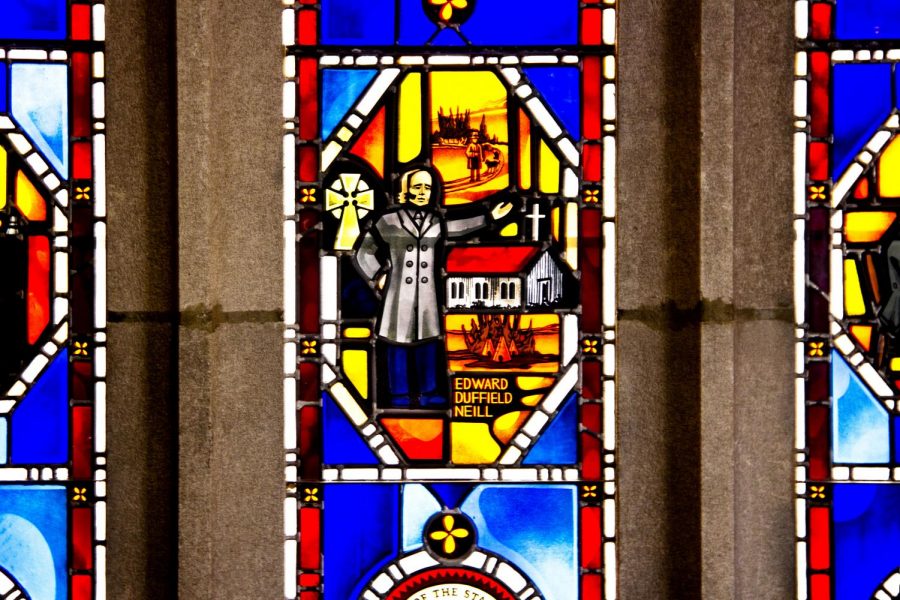 The Edward Duffield Neill Window at The House of Hope Presbyterian Church. Photo by Celia Johnson ’22.

On Sunday, Feb. 2, a number of students, staff and faculty took part in a long-running Macalester tradition: the Macalester Sunday service at The House of Hope Presbyterian Church — one of St. Paul’s oldest places of worship, just two miles down Summit Avenue from the college.

Macalester Sunday dates back decades, and has often featured guests from the college in prominent speaking roles.

In many ways, such a scene was unremarkable. Though it has secularized dramatically over the last half century, Macalester maintains an official covenant with the national Presbyterian Church and relationships with other local Christian organizations.

But the college and House of Hope are bound for another, specific reason: both were founded by the missionary and white supremacist settler-colonist Rev. Edward Duffield Neill — the man whose name Macalester stripped from the Humanities Building under pressure from students last November.

In a letter to the college community announcing its decision on Nov. 18, Rosenberg and Chair of the Board of Trustees Jerry Crawford ’71 characterized Neill’s writings on indigenous peoples as “racist and dehumanizing in the extreme” and wrote that the college “chooses not to defend in any sense views as extreme” as his were.

But as of today, House of Hope has made not made any similar effort to institutionally grapple with the reality of who Neill was — and, according to Transitional Pastor Rev. Dr. Andrew McDonald, there are no plans in place to revisit his legacy.

Neill, of course, occupies a central place in House of Hope’s history. 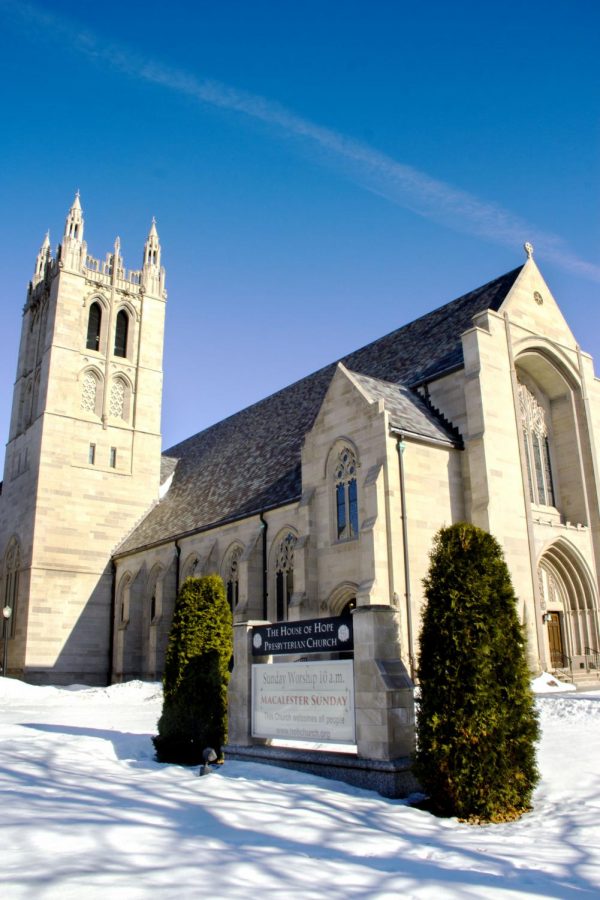 The House of Hope Presbyterian Church. Photo by Celia Johnson ’22.

Upon arriving as a missionary in the Territory of Minnesota in 1849, Neill immediately set out founding Presbyterian churches: First Church opened its doors in St. Paul that year, while House of Hope opened on Christmas Eve six years later. The two churches eventually merged and moved to House of Hope’s current location on Summit Ave. in 1914.

Macalester Sunday, in many respects, is a celebration of Neill — the religion he brought to this land and the institutions he created to ensure that it would both flourish and perpetuate itself.

It is also, given the events of the last year at Macalester, a clear indication of the split between the college and the church over how to handle the legacy of their mutual founder.

At Macalester, Neill is persona non grata. The college has promised that it will find a way to “recognize both [Neill’s] accomplishments and his deep flaws” moving forward, but has yet to indicate how exactly they will do so.

At House of Hope, it is a different story.

A program given to attendees when they walked through the doors of the church on Feb. 2 described Neill in a manner remarkably similar to how he was described on the Macalester website prior to the college’s decision to remove his name from the Humanities Building in November.

It noted that Neill served as Superintendent of Public Instruction for the Minnesota Territory and later served as chancellor of the University of Minnesota. It highlighted his work for Presidents Lincoln and Johnson, as well as his stint as a hospital chaplain in the Union Army.

It did not, however, make any mention of Neill’s well documented advocacy of the forced assimilation or genocide of the indigenous population of Minnesota, his misogyny or the credible allegation that he robbed and desecrated indigenous burial mounds.

The front page of the program, meanwhile, featured a picture of a three-paneled stained glass window inside the church that depicts Neill as a scholar, missionary and man of God.

For McDonald, this representation of Neill is appropriate.

“I think we’re celebrating some of the positive values that he brought,” McDonald said. “It’s not a complete history. I don’t know that every mention of every historical figure has to have a negative side to them… it’s appropriate for the day to do what we’ve done.”

In his remarks on Feb. 2, Rosenberg — who first spoke at House of Hope in February 2004 — made only a glancing reference to this suddenly glaring disparity between the two institutions.

“Macalester and House of Hope, of course, have a long, intertwined history,” Rosenberg said. “Sometimes we agree, sometimes, from time to time, we don’t. But we are bound together by bounds of love.”

No speaker directly mentioned Neill during the service.

A Macalester source with knowledge of the situation told The Mac Weekly that reaction within the congregation to the college’s decision to strip Neill’s name from the Humanities Building was mixed, with some supportive and others adamantly opposed.

McDonald said that the main reaction inside the church was one of “surprise.”

“We kind of heard about it in the newspaper,” McDonald said. “I think things moved ahead rapidly, and maybe that could have been done a little bit more gently. But the college is independent of us, so they don’t have any formal ties to have to do that.”

McDonald said that he heard from a colleague that Neill’s writings were “egregious,” but that he “was a person of his time.” He declined to characterize Neill as a white supremacist or racist.

“His work of faithfulness is appreciated,” McDonald said. “His language may have been one thing in the books, but he was doing work of compassion in the church.

“I know that people are not happy with some of Neill’s history, but his quote in starting the church was to be a ‘house of hope for strangers in a strange land,’” he said at a different point. “So there was something of what he was doing was about trying to welcome people who were in difficult times.”

Of course, the difficult times people were enduring in Minnesota in the 1850s were largely related to the persistent, agressive settler colonization of the area and the resulting forced displacement and genocide of much of its indigenous population.

Christian missionaries, like Neill, played a pivotal role in that forced displacement.

“I don’t know what exactly we want to do with that, because we’re not lifting up the historical work of Edward Duffield Neill,” McDonald said. “We’ve got a message of the gospel, and our focus is on the Bible and Jesus and theology and God and love and peace and hope and compassion. We’re not a museum. We’re not a history library.”

McDonald, who is in his second year at House of Hope, will be replaced imminently by a new, permanent pastor. He said that he expects questions around Neill’s legacy will be brought to the attention of his successor, and that, in the meantime, the church would be open to facilitating an adult education class on Neill’s writings.

As a general rule, however, House of Hope seems keen to leave the past in the past.

“History is happening,” McDonald said. “And there are social forces at work now, as there were then. I think we all have to take responsibility to do the best we can in the times that we have.”

To that point, McDonald pointed both to the general charitability of the House of Hope congregation — which he estimated donates nearly $200,000 each year to various social causes — as well as its involvement in financing the construction of the Ain Dah Yung Center, which provides social services to American Indian people in St. Paul.

McDonald linked the value the church adds to the community to the value that Macalester adds.

For many, that is a complicated question. Among these venerable Presbyterian institutions, however, it may be more straightforward.

“What I want to offer as my final wish to all of you is that the connections between our college and your congregation remain strong,” Rosenberg said on Feb. 2. “The thing that most powerfully unites us, I think, is what is represented by… the peace candle. We are both institutions that believe that we need to treat one another better, individually and collectively.”