The role of work-study: students reflect on their place at Mac 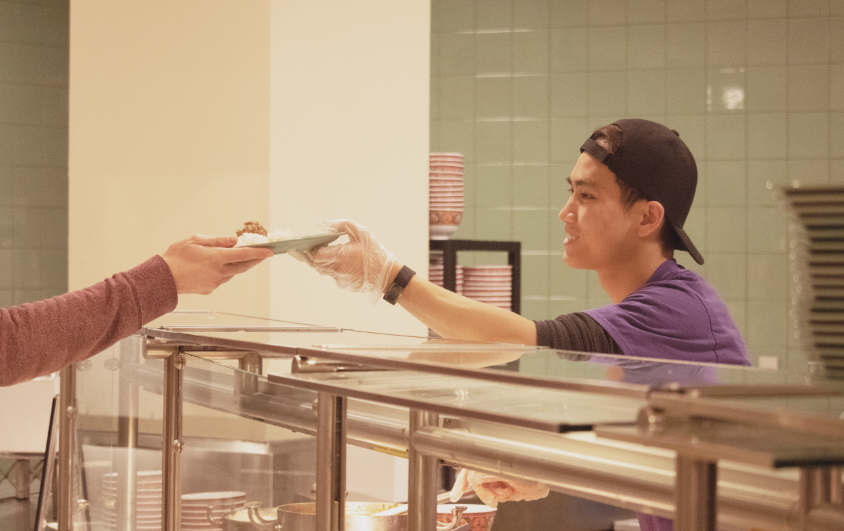 The week before finals, Shine Chin ’20 is working a four hour lunch shift at Cafe Mac. She’s at the South station serving chicken, rice, burgers and tater tots. A senior neuroscience major, Chin’s primary job on campus this year was as a research assistant, but it didn’t provide enough hours to fulfill her work study award. So, she found a job serving at Cafe Mac that she intends to continue into the spring semester.

Work study is an integral part of everyday life at Macalester. Student employees can be found almost anywhere on campus, from the welcome desk at the Leonard Center to walking students home late at night for the department of public safety. Approximately 67 percent of Macalester students receive need-based financial aid, and work study is often one part of that aid.

Macalester, like most institutions, struggles to fill many work study positions. However, outside hires may not offer the solution to this problem.

According to Carly Eichhorst, director of financial aid at St. Olaf College, the federal work study program requires that colleges do not displace current professional staff with student employees. However, Eichhorst acknowledged the difficulty in hiring local staff for many positions.

“The ethos is that we aren’t saying, ‘Hey, we want to eliminate everyone working in financial aid and replace them with student workers,’” Eichhorst said. “Colleges would struggle to take care of basic administrative things without students who are willing to work a few hours here and there. Who else is going to run the athletic center in Northfield?”

“Two of the biggest employers are the library and athletic departments,” Wheaton said. “Part of it is that those two buildings are open late. So if you have the regular full-time adult staff during the workdays, but those buildings are open late, seven days a week, that creates a draw and need for student workers to do basic functions.”

Vice President of Admissions and Financial Aid Jeff Allen recognized the disparity of intensity between work-study jobs on campus. He believes the college may need to reevaluate, but currently does not know how. Nonetheless, he agreed with Wheaton about the necessity of these jobs.

“From a broader campus perspective, there are lots of departments, programs and operations that are dependent on the labor force that is student employment,” Allen said. “Were that to go away, there would be 1,300 to 1,500 jobs that would not be there. How would we accomplish the work of the college without those jobs?”

Currently, work study students are paid according to a tiered system that accounts for the amount of work and leadership involved with their position. For the 2019-2020 school year, tier 1 students earn $9.86 an hour. tier 2 and 3 students are both paid $10.06 an hour, a gap which, according to the college’s website has narrowed steadily over recent years.

A recent St. Paul ordinance mandated that the city’s minimum wage be raised to $15 per hour by July 1, 2027 for all business, no matter the size. At Macalester, which is considered a large business due to its number of employees, minimum wage must be increased to $15 by 2023. Wheaton believes that these wage changes may make employment on campus more attractive to students.

“The minimum wage changes have affected us the same way as the wider community,” Wheaton said. “So it may be [that] the [wage] gap will close.”

Macalester President Brian Rosenberg said that work study equally benefits the school and the students. Full time employees at Macalester are paid between $18-20 per hour at a minimum, which means that the school saves a significant amount of money by employing students in their place.

“If not for work study students, obviously we would need more employees,” Rosenberg said. “[The work study program] allows us to get things done that we wouldn’t otherwise get done.”

But many feel that the work study program isn’t as beneficial for students.

Mariah Sitler ’19 found her time as a Macalester employee frustrating. Her attempt to find a healthy balance between achieving her full work study package, balancing her program’s commitments and maintaining a personal life was difficult.

Sitler was originally a Bonner Scholar, a four-year service and development program primarily for first-generation and working-class students. The program’s main feature is an offer of off-campus, community-based work study. Sitler was placed at Minnesota AIDS Project, which at the time was located in Downtown Minneapolis, an hour commute from Macalester by transit.

Sitler hoped that the program’s central feature would be an opportunity to avoid a dilemma many students on campus face: choosing between paying jobs that do little to enhance a resume or provide opportunities to serve other communities or explore unpaid internships.

“What I didn’t realize,” she said, “was just how much a program like [Bonner] would take from my personal life and social experience at Macalester.”

The cost of the opportunity — weekly program meetings, an often inflexible 8-10 hour work week and hours of unpaid transit time — outweighed the resources the program provided her.

“They put so much on our backs in terms of what you have to do and who you have to be to make it work,” she said.

Eventually, Sitler dropped out of the Bonner program and worked alternately at on-campus positions and Jimmy John’s, focusing on a schedule that prioritized her needs as a student first.

She said that less stressful work and a reduced time commitment to receive the same wages helped give her space to follow up on personal needs.

“The institution isn’t very transparent about the fact that some work study positions will ask more of you while paying you the same amount of money as others that ask very little,” Sitler said. “These positions are basically using the logic of unpaid internships to exponentially increase students’ responsibilities and the amount of labor that’s asked of them without increasing their wages in any significant way.”

According to Jaelynn Blenkush, the program manager for student employment services, Macalester doesn’t track the percentage of students who reject their work study package.

“Students who choose to work off-campus do so independently, and it is not reported or tracked anywhere,” Blenkush said.

Assistant Dean of Educational Partnerships Ruth Janisch is a primary supervisor for the Bonner Scholars and similar off-campus work programs and partnerships. She said that many of the staff are aware that some students struggle to get the financial resources needed from their work-study.

She provided a number of steps the Bonner Scholars and other off-campus student programs have taken to mitigate the disparity between the positions’ pay and the commitment they require. These include changes such as paying students for their time spent in meetings. However, other aspects such as unpaid travel time are simply not within their control.

While she declined to speak directly on the fairness of the college’s wage policies, Janisch said that there were many other consequences of the college’s work-study policies that often disproportionately affect Macalester’s most vulnerable students. She pointed specifically to the flattening of student wages in the college’s tier system as part of the problem.

“They have become closer and closer… How I used to talk about things is that off-campus student employment is a tier 3 activity,” Janisch said. “They have a higher level of responsibility. Folks have to get off-campus, have to get to where they are. We can’t pay travel time, and there’s an expense that comes to that as well.”

“As that gap has gotten smaller,” Janisch explained, “that logic doesn’t make as much sense anymore.”

Chin, an international student, ran into a similar challenge her sophomore year at Macalester. She, like many international students, applied to be a resident assistant because she was interested in building a community at Macalester — and to make her housing situation easier. While Chin enjoyed her experiences as an RA and found it fulfilling, it was a difficult job at times.

“I was considering [the RA position], and I was also applying to be an ISP mentor,” Chin said. “I thought they would be similar, but I didn’t realize how much of a full time job being an RA would be and that balancing that with schoolwork would be really difficult.

“I don’t think I was expecting that,” Chin continued. “It’s intense.”

“We accomplish our office’s goal if the student gets the money they need,” Lindeman said.

Resident assistants are paid in housing, so they don’t receive any direct financial compensation. For Chin, this often affected her social life, because after paying for tuition, she didn’t have any spendable money.

“I would want to hang out with my friends and go out, and sometimes I just didn’t have the funds, because I don’t get paid,” Chin said. “That was pretty frustrating.”

The situation is often worse for low-income students, who may need access to money throughout the semester. For special situations, the financial aid office allows some resident assistants to pick up additional work study hours in other jobs.

Working-class students who sign their work study award over to the college can also find themselves in precarious positions. Janisch worked with many students who received notifications, often late in the semester, that they had not earned enough to cover their costs. As a result, these students had to make up the shortfall in order to avoid registration holds.

“The pressure that comes if you do not earn as much as you need to, as fast as you need to, puts students in a position where they must come up with a lot of money very quickly,” Janisch said.

Sitler and Chin both said it was difficult for students to access the knowledge necessary to make informed work decisions that took their financial situations, academic interests and social and personal needs into account.

“I think it’s kind of weird that you can just give up your work study award because it’s financial aid to you,” Chin said. “Nobody consults you about it — you just have to make your own decisions.”

“There are an infinite number of ways that students with resources have an advantage over people who do not,” Rosenberg said. “Yeah, it’s hard. They experience college in very different ways.”