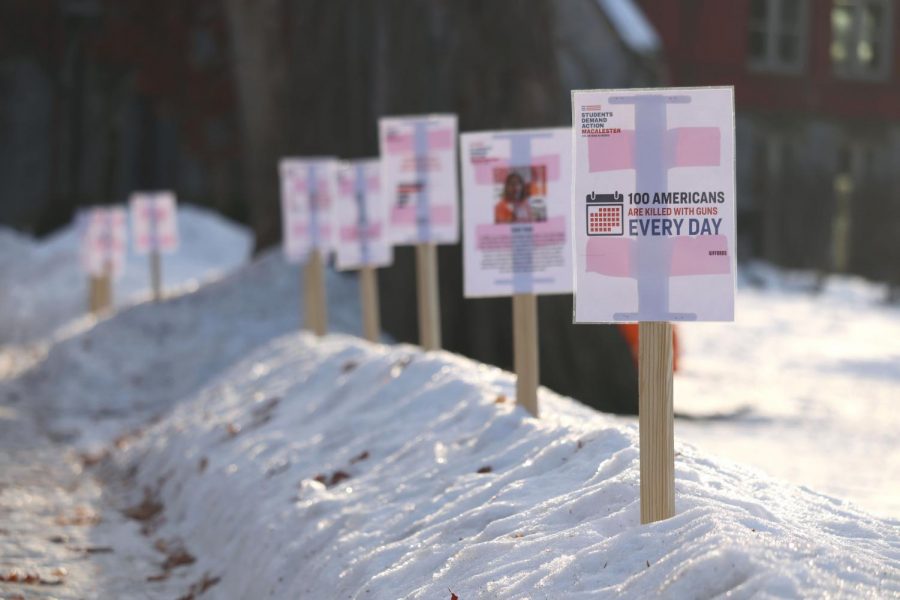 On Monday, Feb. 3, students, faculty and staff saw signs along the walkway from the Dewitt Wallace Library to the Ruth Stricker Dayton Campus Center. Containing a mixture of pictures, informational graphics and personal stories, the signs called attention to the many forms of gun violence in the United States.

Arranged by members of Students Demand Action (SDA), a student group that formed last year on campus, the signs are designed to motivate students to act as part of National Gun Violence Survivors Week, which runs from Feb. 1-8.

“[On Friday,] we’ll have a letter-writing workshop so that people can do something with the feelings that they’re feeling about the statistics,” SDA founding member Charlotte Melrose ’22 said.

Part of a nationwide movement in conjunction with Moms Demand Action and the Everytown Survivor Network, National Gun Violence Survivors Week aims to lift up the voices and stories of gun violence survivors.

On campus, that means approaching gun violence as more than just mass shootings.

“Part of the point of the signage campaign is to highlight the disproportionate impact of gun violence on black and queer communities, with the intention that that is an overlooked section of gun violence in the media,” SDA founding member Pierce Hastings ’22 said.

“We want to show that the gun violence movement we’re building on this campus is intersectional,” Hastings said. “We are fighting for marginalized communities at the forefront and placing that at the front of our battles to highlight the voices that have been ignored in the media for so long.”

At the start of the fall semester, Macalester required students, staff and faculty to complete a “violent incident training” module. The 15 to 25 minute series of videos and quizzes was designed to explain the concept of “situational awareness” and train students in the college’s “run, hide, fight” policy.

Ciara Johnson ’23 launched March For Our Lives Macalester last fall before handing over the leadership of the group to Alex Young-Williams ’20 and Amalin Sorajja ’23. The involvement of multiple first-years and sophomores in March For Our Lives and SDA reflects the matriculation into higher education of high school students activated by the mass shooting in Parkland, Florida and subsequent March For Our Lives movement.

“During the time I was in high school, it was a really big deal,” Sorajja said. “When I came to Macalester, I wanted to see more action.”

Johnson has since taken a step back from the Macalester chapter because of her job as the Minnesota State Director of March For Our Lives. Rather than running org meetings on campus, she communicates with chapters across the state, runs trainings, calls for chapter lead organizers and helps organizations access funding.

Johnson first got involved with March For Our Lives in high school in Laramie, Wyoming after the Parkland shooting — organizing a march and a school walkout before starting the state’s only chapter of the organization.

“[The decision not to grant a charter] was mainly because the Students Demand Action chapter was already present on campus,” SOC chair Camden Moser ’20 said.

“We didn’t really want a second part to that,” Moser said.

Young-Williams and Sorajja have no plans to apply again for a charter and will proceed as an interest group. Despite the SOC’s decision, they harbor no resentment towards SDA, and, in fact, plan to work with the organization. In addition to organizing and emceeing Minneapolis’ 2018 March For Our Lives, Young-Williams spent time in SDA and knows many of its members.

“My real impetus with getting involved was that I didn’t want there to be these two competing groups on campus that were doing the same things in two different ways,” he said. “Having connections in SDA will really help bring our efforts together.”

Those efforts could come together as soon as the Friday letter-writing workshop in Markim Hall.

Less than two weeks later, the two organizations may come together again when the state chapter of SDA has an advocacy day at the State Capitol. SDA founding member Joe McMurtrey ’22 hopes for a large turnout not only from students in SDA and March For Our Lives, but from across the campus community.

“As many as we can physically fit on public transit,” he said.