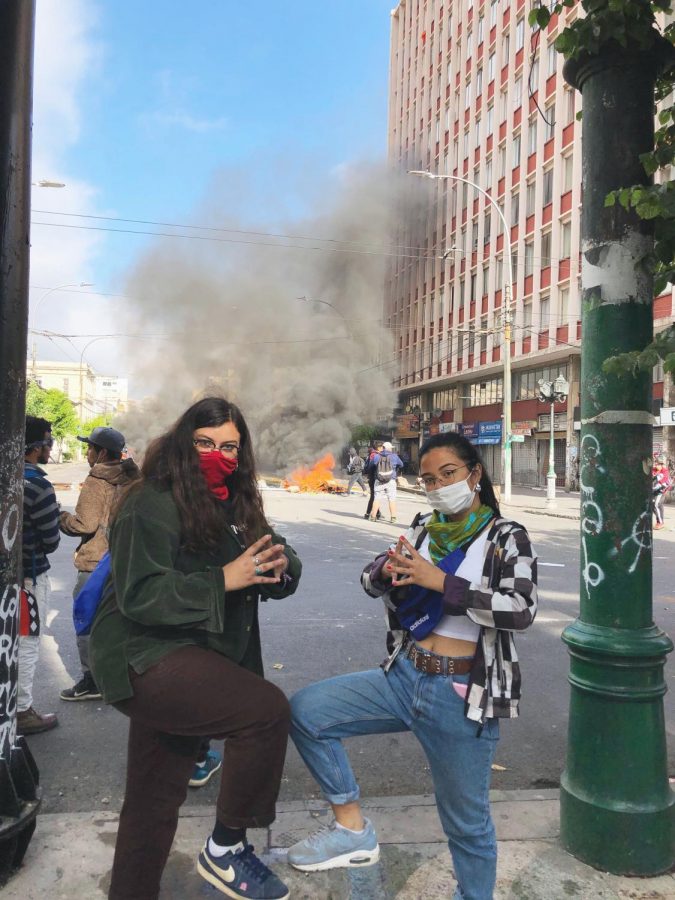 Gabi Estrada ‘21 and Tori Gapuz ‘21 at a nationwide general strike on Nov. 12, at Plaza Victoria. Photo courtesy of Gapuz.

While the month of October is known to most as the month of dreaded midterms, some students found themselves living at an epicenter of political upheaval and civil unrest.

When Gorham and Crowl-Kinney flew to Bolivia last August to participate in the SIT: Globalization, Multiculturalism, and Social Change program for the fall semester, they didn’t realize there would be an election on Oct. 20.

All 130 members of the Chamber of Deputies and 36 senators were up for election last October. Evo Morales, the first indigenous president elected to office in Bolivia and the longest-serving president on the continent, was also running for a fourth term.

The Bolivian constitution states that to win a presidential election, the candidate must lead the race by at least 10 points. If the race is closer than that, the vote goes to a run-off.

At around 7:40 p.m. on election day, with almost 85 percent of the votes counted, Morales was leading his main rival, Carlos Mesa, by 7 points.

But the results stopped coming in after 7:40.

“I woke up the next morning to a text from our program director that was like, ‘Okay, everyone [in the program] is on house arrest, the polling results have stopped, no one is sure why,’” Crowl-Kinney said. “People are starting to protest, people are starting to blockade the streets.”

Later that day, Oct. 21, the final results were announced. The final count gave Morales 47 percent and Mesa 36.5 percent — a margin of victory large enough for Morales to avoid a runoff and clinch a fourth term.

For the next week, major Bolivian cities like, Cochabamba and La Paz languished as thousands of protesters flooded the streets, blocking off many intersections and roads and making it nearly impossible for people to go to work and school.

Neither Gorham nor Crowl-Kinney participated in any of the protests, and spent most of their time staying inside with their host families, at their program director’s house or walking around to observe the demonstrations.

“I did not feel like it was my place [to protest]… I lived there for two months but I still don’t even begin to understand Bolivian politics,” Gorham said. “I can’t be like ‘Oh, I’m just like this white U.S. student coming to Bolivia and like now I know everything about it so now I can take a stance on it and protest with this group of people in this really intense time of political unrest.’”

On Oct. 25, Gorham and Crowl-Kinney’s program moved to a small Catholic retreat center on the outskirts of Cochabamba, fearing for the safety of students. There, their program resumed classes, hoping to wait out the protest.

“It was a weird removal from the situation, because it felt just so isolated from what was going on, and we were no longer with our host families,” Crowl-Kinney said. “Our host families, sometimes for better or worse, were constantly updating us on what was going on… then we were just so far removed and it was just us and our emotions were feeding off of each other and people were handling it in such different ways.

“There was this inner conflict of how involved we should be in this, and what [was] our place and what [was] our role in all of this that [was] happening,” Crowl-Kinney said. “How emotionally involved should we be about this, because the people who live there and the people who are going through this?  It’s their country and it’s their political system — what place do we have in that?”

Eventually, on Oct. 29, Gorham and Crowl-Kinney’s program decided to evacuate Cochabamba altogether, and moved the students to Buenos Aires, Argentina, indefinitely. But the move completely changed the way that they experienced studying abroad..

Both students also took the time to reflect on their positionality as United States citizens studying abroad while the turmoil ensued.

“I have so much privilege just being able to study abroad… people were killed during these protests, but people from the United States just got to ‘peace out’ and be tourists in Buenos Aires,” Gorham said. “While our host families and people we know, love and care about… are having to go through this.”

Their program finished the semester at El Instituto de Investigaciones Gino Germani in Buenos Aires, where they adjusted to the new setting. Neither Gorham nor Crowl-Kinney returned to Bolivia.

“The first couple of weeks were horrible, and everybody was in different emotional places,” Gorham said.  “They didn’t want to be evacuated. It was really hard for us to continue to be in contact with our host families and not be with them and still be a plane ride away.”

Meanwhile, Gapuz and Estrada were studying in Valparaiso, Chile, witnessing massive student protests against conservative President Sebastián Piñera. Unrest broke out across the country on October 18 in response to Piñera’s administration raising the price of the metro rush-hour fare prices by 30 pesos — roughly four cents in U.S. dollars.

In Santiago de Chile, young people jumped turnstiles, pulled television screens from the interiors of train stations and marched throughout the city.

Much of the fervor in response to the fare hike reflected widespread frustration with Piñera’s regressive neoliberal economic policies, which have seen the lower and middle classes saddled with debt as his administration further privatizes health care and education.

For many, these policies harken back to those of ruthless U.S.-backed dictator Augusto Pinochet, who led Chile at the head of a military junta from 1973–1990.

“The rise in bus fares that Piñera announced was a continuation of that model manifesting and I think that people came together to fight against it and to fight against this ongoing inequality in Chile,” Gapuz said.

“I felt very conflicted being [at the protests], especially as an American student, just thinking about the history that the American government has in intervention in Chile,” Estrada said.

Estrada had the opportunity to protest with their host family as well, going to protests in town with their host sister and participating in cacerolazos, a traditional form of protest where people bang on pots and pans outside their houses.

Both Estrada and Gapuz’s programs had advised them not to participate in the protests, but were moved to join the movement anyway.

“We weren’t allowed to be at any protests… but obviously we can’t just stay inside our homes and be complicit,” Estrada said.

“That was another frustrating thing that I thought about my program, they tried to push it under the rug almost and try to just continue on with daily life but that’s impossible when there are military and cops out on the streets.”

Estrada’s program, like Crowl-Kinney and Gorham’s, was moved. Estrada finished the semester at a university in Viña del Mar, Chile.

Estrada found their professors’ lack of recognition of the movement annoying.

“I thought this was such an incredible opportunity to shift the focus of our classes especially like I was taking two history classes and a community service class that would have fit perfectly with all of this,” Estrada said.

Estrada, a sociology and art double major at Macalester, also had a chance to work with local youth on protest art through an internship at Centro Cultural de Roberto Matta para las Artes y la Educación.

“We would do murals with local high school students and create political posters,” Estrada said. “It was very slow before the protest, but then, as soon as the protests erupted, it was really inspiring seeing how fast they reacted and being there to see how real Chilean people created art in response to all of this happening.”

Back in St. Paul, Director of the Center for Study Away Kevin Morrison makes an effort to let students know that his office can be a resource. He makes a point to reach out to students studying in potentially dangerous situations.

Morrison said he sees this outreach as a way to show students that the office wants to support them.

“I don’t think of it necessarily as a formal obligation but I really feel that… when we know something is going on that’s impacting the student experience, we should reach out,” Morrison said. “Especially when it’s something as big as political unrest that could potentially be making them feel very anxious or uncertain.”

Despite the twists and turns, reflecting on their experience, Crowl-Kinney, Gorham, Gapuz and Estrada all share a feeling of gratitude about their study abroad.

“I take what I hear more with a grain of salt now,” Crowl-Kinney said. “I always see people being like ‘Oh, it’s just this fascist coup throwing this incredible, saintly, socialist leader out of power,’ whereas that wasn’t entirely true. Parts of the situation were definitely rooted in racism and rooted in anti-indigenous sentiment but at the same time a lot of the protests were based on this historical trauma that we talked a lot about in our classes.”Estrada would recommend a study abroad experience in Chile to anyone, even in the current moment.

“I’m really grateful for the city and the program that I was in,” Estrada said. “I honestly think that people shouldn’t be afraid of what’s going on, because it’s pretty inspiring seeing this whole country come together and fight for this… And, if anything, it will be really cool to see the aftermath of all of these protests and what the country has been able to achieve.”