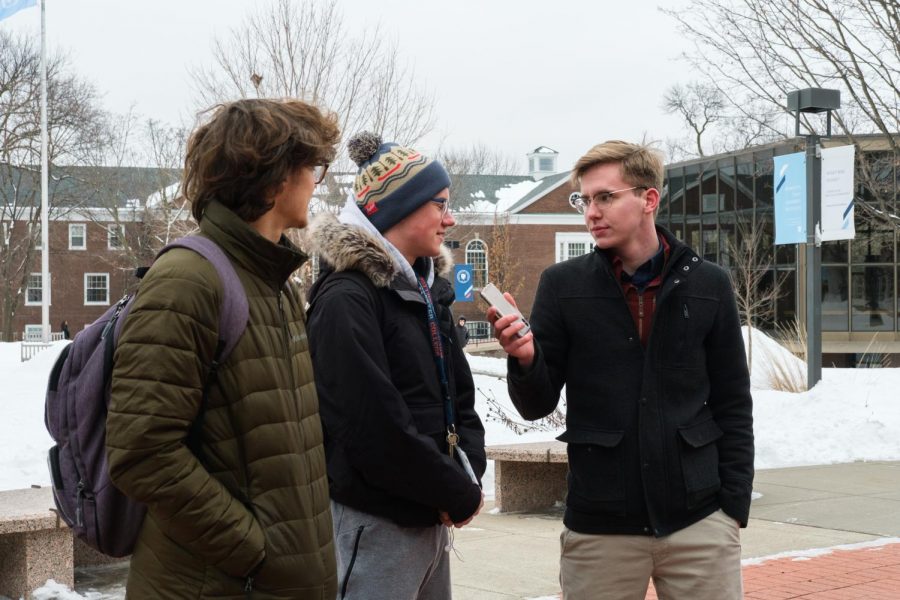 Hooten interviews students in front of the CC. Photo by Kori Suzuki ’21

On Tuesday, Jan. 28, student journalists from conservative news outlet The College Fix visited Macalester’s campus to interview students about Valentine’s Day. In addition to asking benign questions about students’ holiday plans, some of their questions were explicitly political.

“[They asked] first, do I have any Valentine’s Day plans?” Grace Nelson ’23 said. “What do I look for in a significant other? And then, would [I] ever date a conservative?”

No student filed a report of the journalists to Macalester Public Safety. If someone were to file a report, Public Safety would have responded with officers

“In this particular case, as its been reported to me, the non-student subject(s) appear to have violated a number of Macalester campus policies including: Survey and Data Collection (Section 5.41), Solicitation (Section 5.40), Harassment (Section 5.22), and possibly student data violations,” Director of Public Safety Jim Kurtz wrote in an email to The Mac Weekly.

“If the violation had been reported, our officers would have responded, identified the subject(s), and pursued the matter as a campus policy violation and possibly a criminal matter depending on the information they obtained during their interviews,” Kurtz wrote.

This wasn’t Hooten’s first time at Macalester. In early Nov., The College Fix asked students outside the Campus Center if celebrating Thanksgiving is ethical.

Most of the students featured in that video largely agreed it was unethical and cited Thanksgiving’s history as a holiday rooted in the genocide of indigenous people.

Within a day of being posted, the video went viral among right-wing news outlets. It was picked up by Breitbart, The Daily Wire and The Blaze.

Nelson, who was interviewed in the Thanksgiving video but not featured in the final cut, said that The College Fix did not identify themselves to their interviewees. While some Macalester students became aware of this, many did not realize what had happened.

“There was no explanation of where it was getting posted,” she continued. “I assumed it was a Macalester person.”

Nelson’s roommate, who was featured in the video, was the target of hateful comments from the video’s conservative viewership.

“She was pretty upset about that… people were saying pretty despicable things,” Nelson said.

This was made worse by the way The College Fix edits their videos. Nelson feels that when interviewees’ responses appeal to more centrist and even conservative perspectives, they rarely appear in the final video.

Regardless, Nelson is proud of standing up for her beliefs in the face of conservative backlash.

“I think that we gave good answers and it really, to me, looks like a video that shows that Macalester is a community willing to question what it’s taught.”