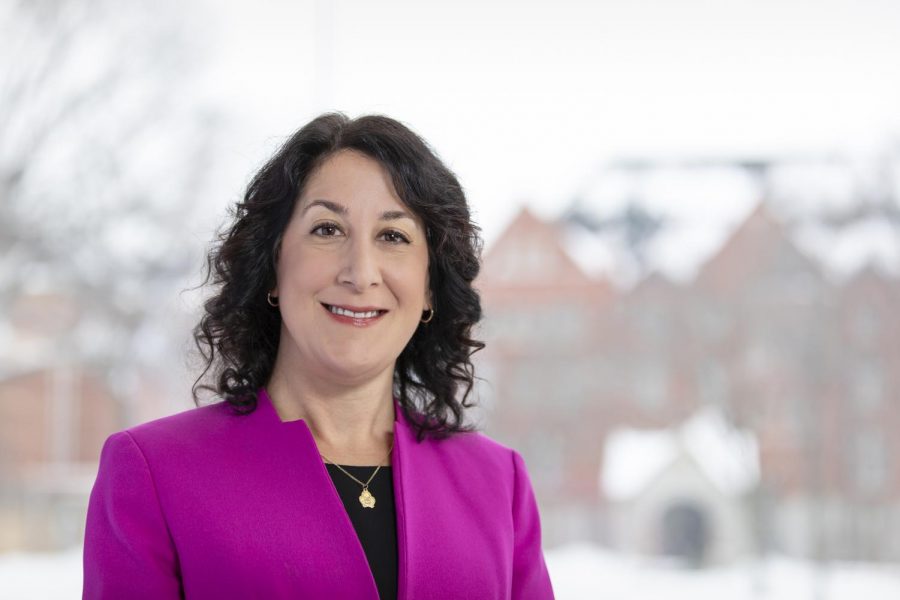 After 146 years, Macalester College has hired its first female president.

Bioethicist Dr. Suzanne Rivera will begin her tenure as Macalester’s 17th president this summer, joining the college from Case Western Reserve University where she has served since 2014 as Vice President for Research and Technology Management.

The Macalester Board of Trustees unanimously approved the hire during their meeting on Friday. Rivera, who will also become Macalester’s first Latinx president, beat out one other finalist for the job.

The search to replace outgoing president Brian Rosenberg, who is retiring in May after 17 years at the college, began last spring with the formation of a search committee led by trustees Michael Huber ’90 and Carrie Norbin Killoran ’94.

The committee included other trustees, staff, faculty and a student representative, and, with the help of search firm Spencer Stuart, began its process at the end of the last academic year. By August, the group had built a profile of who it wanted the next president of the college to be.

Throughout the process, Rivera’s candidacy stood out.

“From the beginning, she had a compelling story,” Chair of the Board of Trustees Jerry Crawford ’71 said. “For god’s sake, she’s four foot 11 inches tall and was the starting point guard on her high school basketball team. That just spells tenacity.”

For Rivera, whose family relied on public assistance and an array of social services as she grew up, education was a means of changing her life.

She qualified for admission at an elite boarding school in Weston, Massachusetts, graduated, and then, in 1987, went on to an even more elite educational institution: Brown University in Providence, Rhode Island.

“When I arrived [at college], I was one of very few Latina students in the entering class,” Rivera said in a promotional video. “I was on financial aid, I had a work-study job, I had to turn over my earnings from my summer work and it was very difficult to make ends meet.

“But I think despite all of those difficulties, I could tell you that the liberal arts education I received was absolutely transformative for me,” she continued.

“I had — and still have — a deep sense of gratitude about the help we received and I wanted to contribute to the wellbeing of others in similar circumstances,” Rivera told Case Western’s communications outlet The Daily last August.

Rivera’s story — as well as her experience with and belief in the power of the liberal arts — made her a standout option for Crawford and the board.

While Crawford said that the board hired Rivera because of her “attributes and skills,” he acknowledged that her leadership as a woman of color may be “inspirational to various parts of the Macalester community.”

Already, Rivera’s hire seems to be resonating with students.

“I’m excited,” Mel Guardado ’20 said. “I honestly didn’t think that they would ever hire a woman, let alone a woman of color. I also think it’s a really nice indication that Mac might be moving a little bit forward, considering what happened with the renaming of the Humanities Building and the Fossil Free Mac decision.”

Students were also excited about the new perspective Rivera will bring with a background in both STEM and the humanities.

“I had a lot of discussions with some of my friends about how impactful [the hire is] just based off [of Rivera’s] identity,” Fatiya Kedir ’21 said. “But I also think… the fact that [she] is a bioethicist is so fucking cool.”

Rivera began her teaching career at the University of Texas Southwestern Medical Center before moving to Case Western in 2010 and taking on an administrative role in addition to her teaching duties.

Before teaching, she had a stint at the U.S. Department of Health and Human Services in the 1990s, as well as the Environmental Protection Agency, in both cases working on committees overseeing human research practices.

She is also engaged in a significant amount of work around Latinx representation and experiences in higher education, as well as work on sexual harassment and gender discrimination. At Case Western, she served on the Latino Alliance — a Latinx faculty and staff collective that worked on public service projects, student mentorship and retention.

Rivera is married to Dr. Michael Householder, who is an English professor and the assistant dean of the College of Arts and Sciences at Case Western. They have two grown children, Antonio and Elena.

Rivera, who is expected to start at Macalester in late June or early July, knows that she will have big shoes to fill.

“You can’t overestimate the debt of gratitude we owe Brian and Carol Rosenberg,” Crawford said. “We are all mindful of and have been mindful of for a year of the challenge of finding someone to take on this job next.”

“I want to thank the Presidential Search Committee for their outstanding work and congratulate Suzanne Rivera on her selection as the seventeenth President of Macalester College,” Rosenberg wrote in a statement to The Mac Weekly. “I am confident that Macalester will reach new heights under Dr. Rivera’s leadership.”

Rivera, too, expressed optimism about the future.

“When we imagine a liberal arts college like Macalester having [an] impact in the world, it’s not only what the students who leave a place like this can do when they enter the workforce,” Rivera said in the video.

“It’s in that personal transformational power that it offers to take someone who started with one set of circumstances and open up for them the possibility of completely different circumstances.