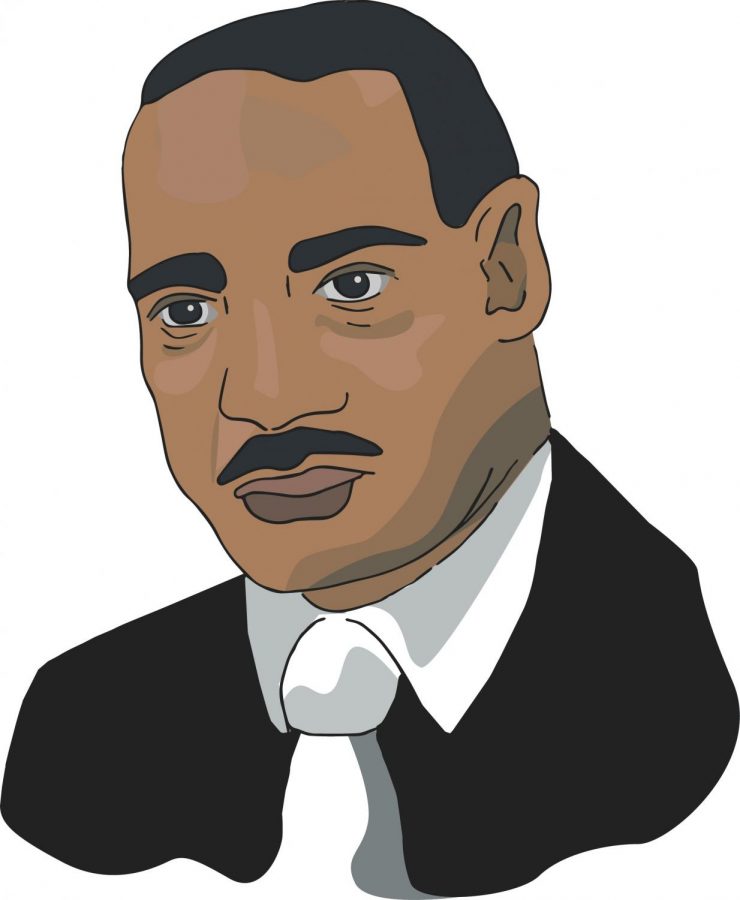 Macalester celebrated the 91st birthday of Rev. Dr. Martin Luther King Jr. in the Weyerhaeuser Chapel on Jan. 23 with “Finding the Strength to Love,” a lecture on King’s philosophy and its ties to today’s movements for civil rights and racial justice.

Dr. Yohuru Williams, professor of history and McQuinn Distinguished Chair and Dean of the College of Arts and Sciences at the University of St. Thomas, was this year’s speaker.

Williams drew on an extensive bibliography of civil rights authors and activists during his talk — from Ralph Ellison and W.E.B. Du Bois to LeBron James and Muhammad Ali. He delivered much of the lecture at rapid-fire speed and in constant motion, walking up and down the aisles of the chapel pews as he spoke.

Occasionally, when the words of Williams’ sources aligned strikingly with today’s politics, he paused, engaging the audience in intense moments of total silence.

Williams specifically argued that materialism in the U.S. is rooted in an obsession with entertainment and media — both in traditional formats like cable news, and on social media.

“We’re distracted,” he said. “How can you congregate if you’re waiting to see what somebody just tweeted? How can you activate and be… moving in the direction of thinking concretely about how to use this education you’re getting to really tackle issues of injustice in a concrete and substantive way, if we are stuck in what we like to call ‘hashtag activism’… instead of digging deeper?”

Ndunzi Jason-Benedict Kunsunga ’21, who attended the lecture, asked Williams how to reconcile the ways in which the media both distracts us and allows us to “practice empathy for perspectives that we wouldn’t have.”

Williams agreed that social media can, at times, have a profound impact on people. He recalled being reduced to tears reading a transcript of the case of Sandra Bland — a black woman who was imprisoned in 2015 after a pretextual traffic stop and later found dead in her cell. While her death was ruled a suicide by Harris County, many believe she was murdered in an act of state violence.

These stories that provoke emotion and empathy, Williams said, are worth sharing.

“You should feel it,” he said, pausing for a moment. “It should hurt, it should prick your conscience, it should make you want to do something, it should move you to emotion. When it gets to the point where you don’t feel anymore, you’re desensitized — you’re not in a good space to help anybody, let alone yourself at that point.”

During the lecture, Williams also discussed the appropriation of King’s image and the holiday by the same corporate interests that King fought against during his life. Williams specifically called out Macy’s and other stores for using Martin Luther King Jr. Day for promotional sales.

According to Williams, this phenomenon, which he called the “Santa Clause-ification of the Rev. Dr. Martin Luther King,” results in a dangerous decontextualization of King’s radical stances on racism and poverty specifically.

Williams urged the audience to engage with the history of racial justice movements as they relate  to similar struggles today. Williams referenced Jason Sokol’s book “There Goes My Everything,” which describes the violent backlash of white fear in the South in response to the civil rights movement.

“The Trump moment is a ‘There Goes My Everything Moment,’” Williams said. “I say that because you can see in the faces of the people who resisted civil rights — the signs they used, the language they used, the othering — the blueprint for what we’re seeing now.”

Laurie Hamre Center for Health & Wellness counselor Dana Suttles asked Williams to share how he thinks King might advise people dealing with the anxiety of the political moment in 2020.

“Along with that awakening comes stress — a ton of it at the same time,” Suttles said. “One of the things I see people trying to siphon out of these passages is: How do I take care of myself?”

Williams responded that King used both healthy and unhealthy coping mechanisms to deal with the pressure he felt. He shared how King’s contemporaries remembered him for his raunchy sense of humor but also acknowledged the allegations of sexual violence against him.

Williams also shared his own experience grappling with that question.

“[The struggle] will be there tomorrow, and the next day, and the day after that,” Williams said. “It’s not going anywhere. So, don’t feel like you’re going to miss out on something if you’re going to take some time to take care of yourself.

“The world is better with you in it.”

Toward the end of his lecture, Williams appealed to the audience to both learn from the legacy of King and to be unafraid of working toward an even stronger movement for racial justice.