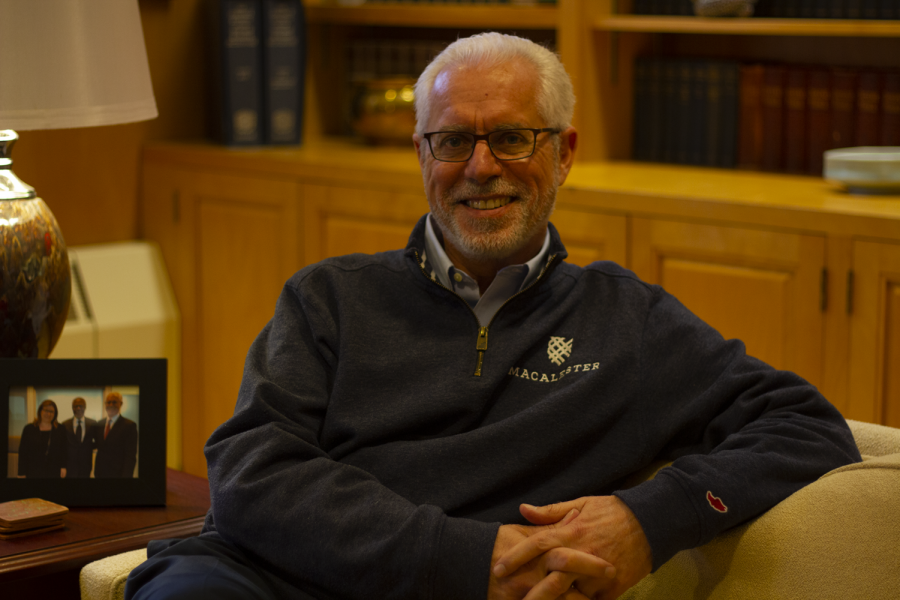 Brian Rosenberg in his office. Photo by Celia Johnson ’22.

On Jan. 21, Macalester announced the establishment of the Brian and Carol Rosenberg Endowed Scholarship Fund for First-Generation Students — an honor for the outgoing college president designed to boost fundraising in a critical area.

If it were up to Rosenberg, however, he would not be associated with the fund at all.

“If you want my honest answer, my preference would have been at the start just not to do it,”    Rosenberg said. “I prefer more under the radar goodbyes than that. But it was made pretty clear to me that they were going to do something.”

“They” are Board of Trustees Chair Jerry Crawford ’71 and Vice President for Advancement Andrew Brown, both of whom began having conversations with Rosenberg in the fall about establishing a means by which alumni could recognize his contributions to the college.

“The last year of a successful presidency often has a number of events and activities celebrating the outgoing president,” Brown said. “Some people asked me, ‘We’d like to make a gift, we’d like to do something in Brian’s honor, what can we do?’”

“At that point, I thought about what would be most meaningful to us,” Rosenberg said. “And it wasn’t anything physical like a building or a place.”

After considering putting their name on a fund to support student internship experiences, Rosenberg and his wife Carol settled on the scholarship fund for first-generation students for reasons both practical and personal.

While Rosenberg’s father attended college, his wife Carol — whom he met during their first year orientation at Cornell University — was a first-generation student.

Their respective backgrounds meant that their college experiences differed in significant ways.

“[Carol] had many more feelings of guilt about the expense that her family was bearing, about just being away — the notion of being an 18-year-old woman going all the way upstate as opposed to just staying in New York City — and worries about not being successful and what that would mean,” Rosenberg said.

“The pressure to succeed, given everything that was being sacrificed in order to put her there… seemed more intense on her,” he continued. “As an 18-year-old kid, I don’t think I ever really understood why she felt so much more pressure than I did.”

Rosenberg credited his time at Macalester with helping him to better understand his wife’s experience — calling the college’s annual Honoring the Journey ceremony, which celebrates the graduation of first-generation students, “one of the most moving things I have participated in since I have been here.”

Crawford, himself a first-generation college student, called the fund in a statement “the perfect tribute to the Rosenbergs.”

But Rosenberg will not be personally involved in raising money for this scholarship fund, nor does he plan to donate specifically to the fund itself or closely monitor its progress.

“Other than agreeing to put our name on it, I’ve had nothing at all to do with [it],” Rosenberg said.

Brown is leading the fundraising effort, which started in November, and will wrap up before the fund is officially unveiled at Rosenberg’s final board of trustees meeting in May. Thus far, those close to the Rosenbergs have stepped up.

“We’re not seeding this or planting this in any way,” Brown said. “Alumni are really expressing their gratitude for him and his presidency. That’s just a natural thing.”

The college is aiming to raise at least a million dollars for the fund, and is promising to recognize those who contribute $100,000 or more as the fund’s “founders” and send them yearly reports on its impacts.

Assistant Vice President of Admissions and Financial Aid Brian Lindeman ’89 said that Macalester will first distribute money from the fund during either the 2020-21 or 2021-22 school year.

Macalester generally uses five percent of the value of an endowment in any given year. That means that if the college does raise a million dollars for this scholarship fund, students will see roughly $50,000 in aid.

“It takes a lot of dollars to really make a big dent in our ability to expand the aid program,” Lindeman said. “But all of those hundred thousand dollar endowments together form an amazing web of support.”

Aid recipients will be sophomores, juniors and seniors rather than first years, and the money students receive will in most cases replace other aid that they had already been receiving.

Both Lindeman and Rosenberg noted that scholarship funds like this one are not an answer to the question of college affordability at a time when Macalester tuition costs nearly $70,000 and is expected to rise to $100,000 within the next ten years.

Rosenberg said that he thinks that the current economic model for higher education is “not sustainable long term,” though he does not support proposals to make public colleges tuition free or cancel student debt.

The scholarship fund is one small way of ensuring that Macalester will continue to place a focus on accessibility for first-generation students well into the future.

“An endowed scholarship is almost insurance that we know we’re going to have an aid program that is dedicated to support certain goals,” Lindeman said. “The people who come after to manage the program will have these endowed scholarships as symbols of what our commitments should be.”

Rosenberg said that this scholarship will be, to his knowledge, the only place the college honors him by putting his name on something.