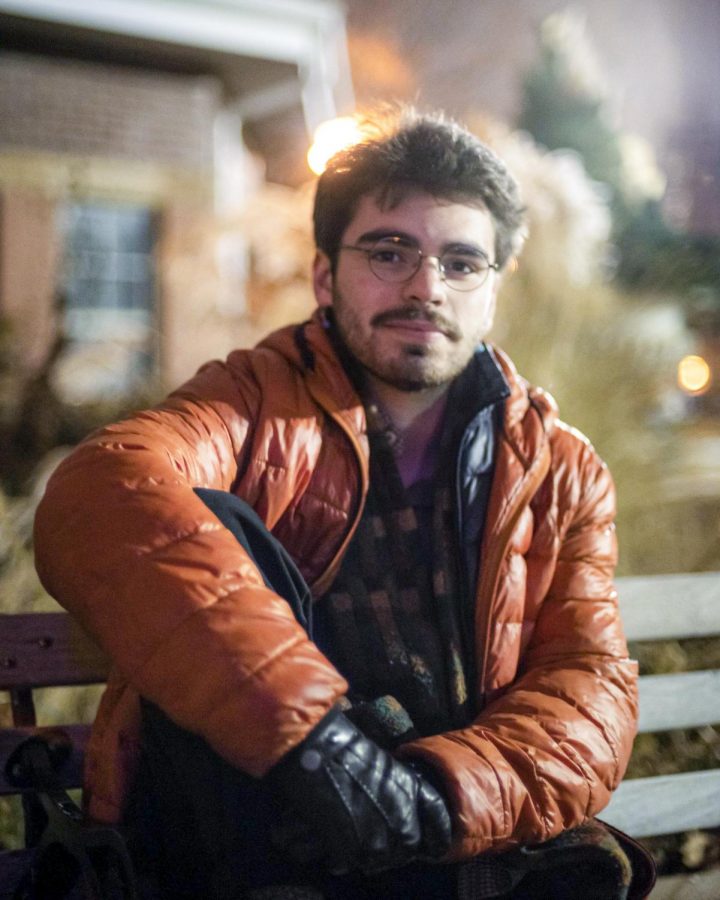 Neuroscience and music are two things Nico Diaz de Leon ’21 knows intimately. He’s been singing for as long as he can remember. Both of his parents are biology academics, his older brother is currently pursuing a Ph.D. in biology, and neuroscience is his own focus of study at Macalester.

As far as Diaz de Leon can see, he’s not going to be giving up one for the other any time soon.

“I’ve always had to juggle academics and music because I really love learning,” Diaz de Leon said. “I really love using my brain to do both of those things.”

Diaz de Leon is one of the lead vocalists and songwriters for Chicago-based Corn on My Dinner Plate, a band he founded with friends his freshman year of high school. The band released its first EP in his senior year of high school and has since maintained over 8,100 monthly listeners on Spotify.

Corn on My Dinner Plate is currently scattered as bandmates attend college in various parts of the country. They only reunite when home in Chicago or if they find a gig in a specific city.

At Macalester, Diaz de Leon is a founding member of the band Chairman, where he serves as the lead vocalist and occasionally plays keyboard. Robert Cahoon ’20, Dan Westhoven ’20 and Louise Bequeaith ’23 are also in the band.

However, Diaz de Leon’s formal musical training only consists of high school choir, a few piano lessons and a year of music theory classes at Macalester.

“One thing I really like about indie pop in this age is the focus on lyricism. It’s really sweet and simple melodies over interesting chords with lyrical content that’s just super poetic. That’s the sound I’m going for.”

But his interests don’t stop at music: he’s a neuroscience major with an intended philosophy minor. His curiosity about science, he says, is due in part to growing up around it. His father is a professor of microbiology while his mother researches HIV/AIDS.

Diaz de Leon’s parents immigrated to the U.S. from Mexico when they were young adults, and after what they thought would be a temporary stay in Chicago, decided to raise their sons there.

“When you have examples in your life of someone doing something, it becomes a lot less scary to then do that thing because you’ve seen someone be successful,” Diaz de Leon said.

“Their work would always come up in conversation over dinner or if we were talking about world events together, which really led me into the biological sciences.”

While Diaz de Leon went to an artistic high school — Chance the Rapper and members of the band Twin Peaks are notable alumni — he knew he wanted to study neuroscience and at Macalester, he found philosophy.

“Philosophy seeps into every part of my life and everything has meaning to it if you can come up with a reason for why it could have meaning,” Diaz de Leon said. “Especially with neuroscience and the question of cognition and consciousness, there’s no straight answer to it and I’m not super satisfied with the answer of like, ‘oh we just have neurons and they like transmit electric activity and as a system you are now conscious.’”

As far as how neuroscience and philosophy relate to music, Diaz de Leon admits that they “don’t totally connect.”

But while Diaz de Leon is a fixture at Macalester, he looks forward to life after graduation. His family is supportive of a music career, although Diaz de Leon does want to keep studying neuroscience in some capacity. For Chairman, there isn’t a long-term plan.

“Because college comes and goes, who knows what will happen after everyone from Chairman disperses,” Diaz de Leon said.

“I view [Chairman] right now as really having fun with my best friends, getting better at our instruments and songwriting.”

With Corn on My Dinner Plate though, Diaz de Leon and his bandmates would like to reunite full-time once everyone graduates college.

While they’ve played shows in Iowa, Illinois, Tennessee and Minnesota, they have yet to launch a full scale tour. Diaz de Leon doesn’t doubt that it will happen, though.

“I’m just in it this far that I want to see it through, so after school I need to pursue music for a little bit,” Diaz de Leon said. “Our band is doing well, and it would be a total shame if I didn’t try.”

On Nov. 30, Corn on My Dinner Plate released a new song, “Move Along” with cover art for the single done by Phoebe Mol ’20.

All of Corn on My Dinner Plate’s music is available on streaming services and music videos can be found on YouTube.