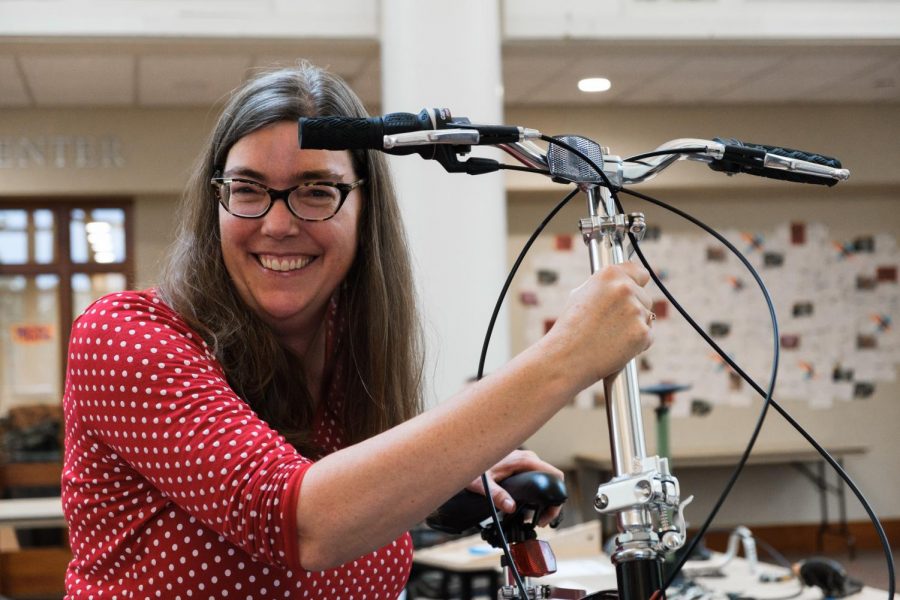 Macalester has identified its next Director of Sustainability and plans to announce a hire imminently. The director will assume control of the Sustainability Office next semester.

That hire will not be current Sustainability Manager Suzanne Savanick Hansen, who, after 12 years in charge of the college’s Sustainability Office, will depart at the end of the calendar year.

The change in leadership and direction in the Sustainability Office has been months in the making.

The decision followed a review of Macalester’s sustainability programs by outside evaluators last year, which found that while the Sustainability Office was performing at an “excellent” level overall, the college had room to improve the integration of sustainability into course curricula.

The college highlighted that latter aspect of the report in its restructuring decision, and it hopes that the new Director of Sustainability will be able to better work with faculty to incorporate sustainability efforts into the academic life of the college.

However, the college made the restructuring decision without input from members of the Sustainability Office or the Sustainability Advisory Committee (SAC) — a move that resulted in SAC co-chair and anthropology professor Arjun Guneratne resigning in protest. The SAC has not convened since, and its future is unclear.

Hansen applied for the new position but was not granted an interview.

“That was hard,” she said. “I have a lot of background in all of the areas [that they wanted], and I have significant expertise around here.”

Hansen was never under the impression that she would be re-hired. But she applied, nevertheless, with a purpose.

“I just wanted to make sure that whoever was making the decisions was making an informed decision,” Hansen said. “And that’s the decision they made.”

Hansen will leave behind a considerable legacy — one that the Sustainability Office is taking care to document and publicize before the leadership change in January.

In a bulletin in the Mac Daily on Dec. 4, Tamara Will of the Sustainability Office wrote that “sustainability-related operational initiatives have not only reduced our carbon footprint, as of September 2019 they have saved the college more than $3.3 million.”

Under Hansen’s leadership, the office developed a number of the initiatives that have made Macalester a leader in campus sustainability across the country.

Those initiatives include the campus composting program, Zero Waste by 2020 and Carbon Neutral by 2025.

During Hansen’s tenure, the college has reduced its greenhouse gas emissions by more than 30 percent.

The Sustainability Office hosted a farewell gathering for Hansen on Thursday afternoon in the Loch. Tamara Will, the temporary Sustainability Project Coordinator, is also departing the college at the end of the calendar year.

Vice Provost and Associate Dean of the Faculty Paul Overvoorde led the hiring committee for the new position, which included various administrators, faculty members and students, but did not include any people currently working in the college’s sustainability office.

The committee selected three finalists for the position, two external candidates and one internal candidate, who visited campus, met with stakeholders in sustainability initiatives and gave presentations open to the college community during the week of Nov. 18.

Shortly thereafter, the committee identified its top choice for the job. The new director will report to Overvoorde rather than Vice President for Administration and Finance David Wheaton, as Hansen has.

Hansen does not yet have another job lined up. With a son in high school and her husband Rep. Rick Hansen (DFL-South St. Paul) serving in the state legislature, she is limited in where she can look for her next opportunity.

“There’s not an obvious place in higher ed — not to say there’s not going to be something that opens up,” Hansen said. “I certainly have lots of transferable skills, but it is sad to not do the things that I am really the expert in the area for.”

Several sustainability office student workers have expressed their disappointment with the college’s decision not to retain Hansen.

“I don’t think that a new director will be able to learn everything that’s happening and learn the history of everything while also trying to integrate academics and sustainability and also work towards these new goals,” student Sustainability Office coordinator Lydia Sulik ’20 said when the restructuring was announced in September.

“[Hansen has] been a great mentor to all of us and we don’t want to see her go.”