Fossil Free Mac disbanding, but says fight not over yet 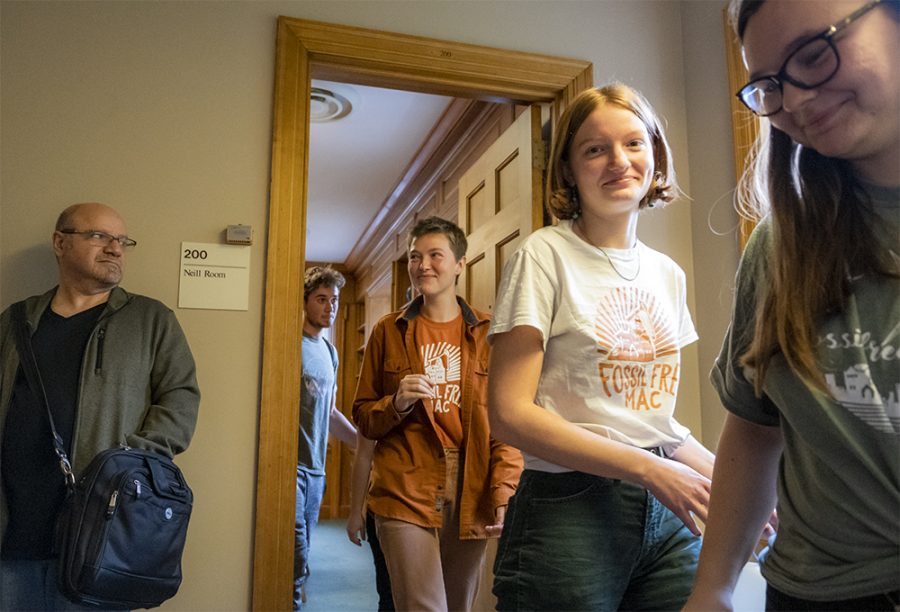 Members of Fossil Free Mac exit a conference room after meeting with Board of Trustees members following the Board’s October meeting. Photo by Kori Suzuki ’21.

Seven years after forming, Fossil Free Mac (FFM) will officially disband at the end of this semester. They announced their decision at a teach-in event called “The Last Supper,” held in a classroom in the DeWitt Wallace Library on Wednesday, Nov. 20.

Since its formation in 2012, FFM has lobbied to end Macalester’s investments in the fossil fuel industry. The campaign culminated on Oct. 4, when the board of trustees voted to partially divest the college from fossil fuels.

Students and other supporters gathered in the lobby of Weyerhaeuser Hall that afternoon to celebrate — but the board’s decision was not an unqualified success for FFM.

Although the board agreed to place a moratorium on private oil and gas partnerships, it included a caveat — that the college may still invest in fossil fuels when it believes these investments will lead to a net reduction in carbon emissions.

FFM leaders noted that there was division within the group on how to interpret the caveat. Students in attendance also expressed skepticism about the board’s addition, fearing that trustees could exploit it to continue investing in oil and gas companies.

FFM has been assured that the board does not intend to make such investments, but acknowledge that they cannot be sure.

“In our meeting with [Rosenberg], he said that he doesn’t think they will use this caveat to make investments,” Stoner said.

“But he’s leaving, and he’s also just one person, and we want them to commit to no new investments in fossil fuels and eliminate this caveat.”

“Everyone we’ve talked to has said they’re making this in good faith, and they’re not trying to weasel out [of their commitment to responsible investments] but if you look at the language… it doesn’t eliminate that as a possibility,” he continued.

On the whole, FFM members were gratified by the vote. For the first time, the board responded to the group’s demands — and some students believe that is a cause for celebration, regardless of any uncertainty about the future of the college’s investments.

“We’re all just really proud of the work that everyone’s put into this campaign, and people turning up, so thank you for being here and being supportive of Fossil Free Mac in general,” FFM member Zach Jordan ’20 said.

“When we first started this, the Board could not even conceptualize the endowment as anything other than a money-making factory,” FFM core member Ana Gvozdić ’21 said. “Through these continued conversations and the support that we received from alumni, staff, faculty and students, I think that is starting to shift.”

Now, FFM is looking to the future. They emphasized that their divestment goal had not yet been fully realized — a source of disappointment for many members.

Despite that, FFM members feel that now is the time to disband. A number of members say that they feel pulled in different directions and don’t feel that continuing to pressure the Board to move towards full and final divestment is the best use of their time.

“Even though we’re not completely satisfied, if we were to try and go for complete divestment or the removal of the caveat it would be a lot of energy and a lot of time committed, given that it took us seven years to get to this point,” FFM core member Sasha Lewis-Norelle ’21 said. “It felt like it was more worth our time to start focusing on other aspects of climate justice.”

Many in FFM are involved in other environmental organizations, such as the Sunrise movement and the push to stop Line 3 — state and nationwide campaigns that have an impact far beyond Macalester.

FFM leaders, including Lewis-Norelle, have been involved in organizing Macalester students to participate in the Sunrise Movement’s strike for a Green New Deal. The strike will take place on Friday, Dec. 6, begin at Mears Park and move to the Public Utilities Commission.

Still, former FFM members plan to keep an eye on the Board.

“We won’t be a student org anymore,” Lewis-Norelle said. “We’ll just be a group of people who get together once or twice a year to send an angry email to the Board demanding they answer our questions, and then have brunch.”