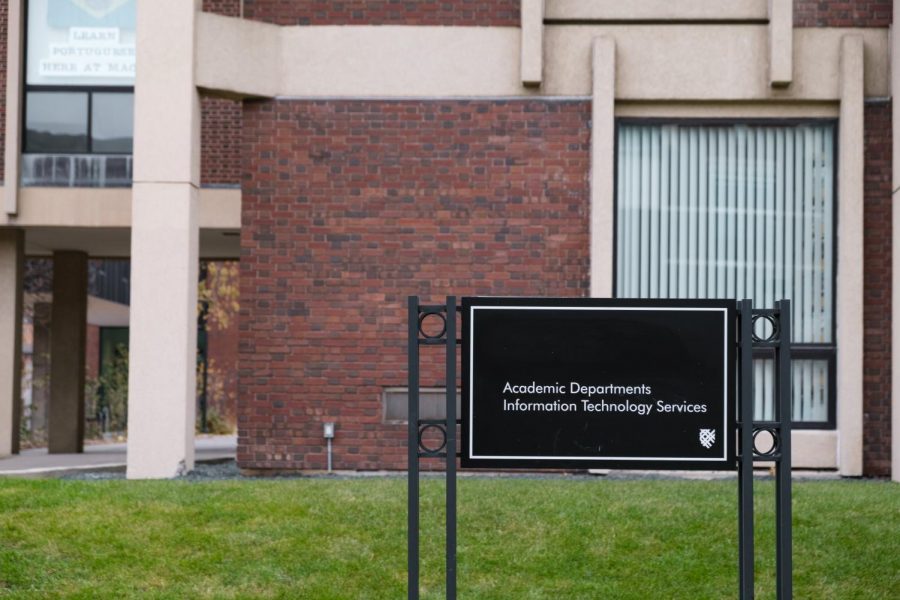 The sign outside of the Humanities Building no longer reads "Neill Hall." Photo by Kori Suzuki '21.

Macalester’s founder, first president and prominent settler-colonialist Edward Duffield Neill will no longer have a building named in his honor at the college.

In a statement sent to the college’s students, staff and faculty early on the morning of Nov. 18, President Brian Rosenberg and Chair of the Board of Trustees Jerry Crawford ’71 announced the board’s decision to remove Neill’s name from the Humanities Building as well as the Neill Room in Weyerhaeuser Hall.

Rosenberg and Crawford’s statement characterized Neill’s writings as “racist and dehumanizing in the extreme, even by the admittedly different standards of the time.”

“Macalester College and its Board chooses not to defend in any sense views as extreme as those of Neill,” the statement read. “The students, staff, and faculty at the college should not be forced to overlook what we now know about Neill and to work in a building that bears his name.”

Along with voting to remove Neill’s name from the Humanities Building and the Neill Room, the board vowed to “determine a different, appropriate manner through which to acknowledge both the accomplishments and the racism of the Reverend Edward Duffield Neill,” so as not to “[erase] Neill from our history.”

It also voted to establish a committee comprised of people in various roles at the college to recommend new names for the Humanities Building and Neill Room.

There is not yet any official timeline for that process, but Rosenberg and Crawford said in follow-up interviews with The Mac Weekly that they hope that the committee will be convened near the start of the spring semester and submit its recommendations by its conclusion.

Rosenberg said that he “hasn’t really given any thought yet to the exact makeup of the committee,” but promised that indigenous peoples will be represented both on the committee and in the process of acknowledging Neill in the college’s history.

The building formerly known as Neill will revert to its previous name, the Humanities Building, until the committee selects a new, permanent name.

Facilities Services staff took down signage with Neill’s name on Monday afternoon. They also removed a portrait of Neill that hung on the first floor of the Humanities Building.

The board of trustees decided to rename the Humanities Building after Neill in 2013, a decision spurred by a desire to clear up confusion caused by the fact that a number of the college’s humanities departments were actually located in Old Main.

Neill was the college’s founder and first president, as well as a significant figure in Minnesota’s history more broadly: he founded numerous churches and schools around the state, was the first chancellor of the University of Minnesota and helped to found the Minnesota Historical Society.

Rosenberg and Crawford’s statement included a lengthy defense of the board’s decision to rename the Humanities Building after Neill in 2013.

“To be fair to the Board, and indeed to all at the college who have viewed Neill through only a partial lens for many decades, this racism is nowhere brought to light in his official biography, any on-line references, or even the independent history of the college, ‘Nature and Revelation,’ published in 2010 by the University of Minnesota Press,” it read.

“The Board acted in 2013 on the basis of the information at hand.”

That is not strictly true. Neill’s racist writings were readily accessible at the time through the college archive’s Neill Collection — and while the college’s board members and administrators may not have been aware of Neill’s past, a number of students were.

Hannah Rose ’15 was studying abroad when the name change was announced, but when they returned to campus and asked friends about Neill, they were left with a clear understanding of who he was.

“It seemed like most people who were taking humanities classes or taking social sciences classes knew about Neill’s racist history,” Rose said. “So it was not fun.”

Samuel Doten ’16, meanwhile, was a member of an American studies class in the fall of 2013 called “Resisting Minnesota” that crafted and led “disorientation” tours that included information on Neill’s history of racism and sexism.

Doten said that between 60 and 100 community members took the tour, while others read a zine the class produced on Minnesota and Macalester’s colonial history. Rose, meanwhile, said that they continued to refer to the building as “Humanities,” and communicated to new students why.

Their activism didn’t reach Rosenberg. But it had an impact.

Over the next six years, knowledge of Neill’s white supremacy and his advocacy of the genocide of the indigenous population of Minnesota slowly grew on campus — thanks in large part to the dedicated work of the student group Proud Indigenous People for Education (PIPE).

PIPE annually “renames” campus buildings after indigenous leaders on Indigenous Peoples’ Day, and this year opted to name the Humanities Building as Taoyateduta Hall after the Dakota chief who led his people during the U.S.-Dakota War of 1862.

In October 2019, Michelle Armstrong-Spielberg ’21 and Elika Somani ’22 further illuminated Neill’s past when they facilitated an International Roundtable discussion on his legacy, as well as renaming and name recovery debates in the Twin Cities more broadly.

Neill’s character was again brought to public attention three weeks ago when The Mac Weekly published a special issue titled “Colonial Macalester” and announced that it would no longer refer to the Humanities Building with Neill’s name.

On Nov. 12, Rosenberg announced at a faculty meeting that he planned to recommend that the board remove Neill’s name from the building and wrote to The Mac Weekly that the college could expect the board’s decision on the matter “very soon.”

On Monday morning, that decision arrived — with Rosenberg and Crawford writing that, having been brought to light by student activists, Neill’s writings “cannot be ignored or dismissed.”

“We should acknowledge that such research [on Neill’s past] should have been done by the college much earlier,” Rosenberg and Crawford’s statement read.

“Had it been done, the Board is convinced that the building would not have been named in honor of Neill.”