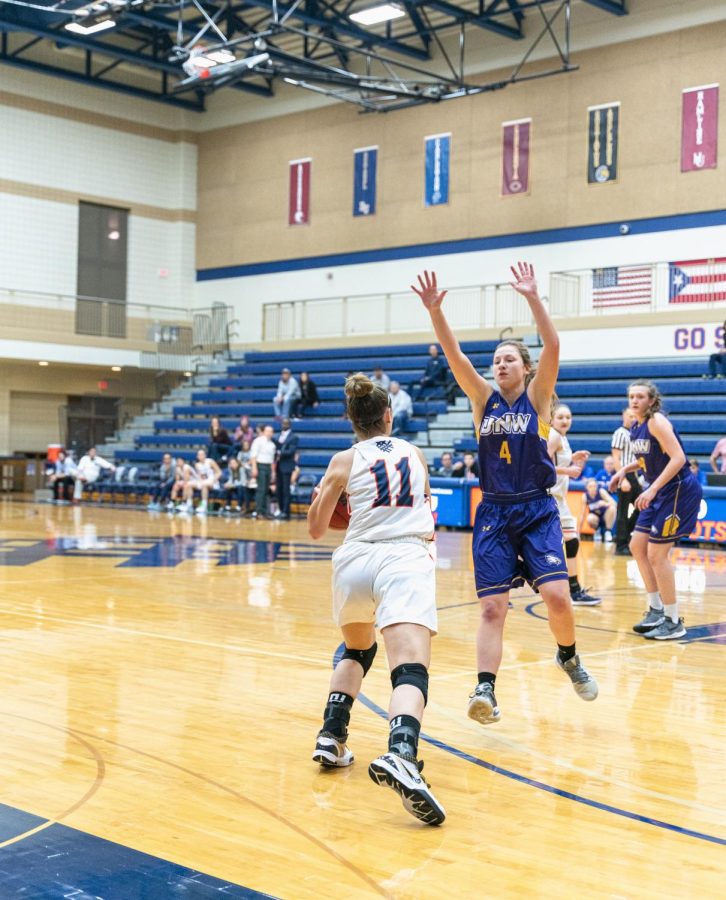 Macalester Women's Basketball faced off against the University of Northwestern on Tuesday, 11/19. Photo by Owen Pearlman '23.

To hear Athletic Director Donnie Brooks tell it, employing the right people is one of the hardest parts of leading an organization. But of all the things that keep Brooks up at night, hiring is not one of them.

Brooks has been in his role at Macalester for just under a year now, and, thus far, he has relied on the wisdom of students-athletes, other coaches and department staff to guide hiring decisions.

When a coaching position opens up, Brooks assembles a hiring committee responsible for weighing in on candidates and providing insight on what the team needs in a coach. Brooks said he tries to keep this group as representative of the department’s diversity as possible — diversity of athletic experience, cultural diversity and gender diversity.

“The most important job I can do in the hiring process… is I get to make the ultimate decision, but that ultimate decision comes from a lot of listening,” Brooks said. “I, as an athletic director, if I have both my students on my committee and [other] students telling me to go one direction, but I hire somebody who I think is the best person, that is probably ultimately the wrong decision.”

But Hopkins High School women’s basketball coach Brian Cosgriff ’83 thinks Brooks may have made the wrong decision when it came to his application.

When the women’s basketball head coaching position opened last spring, Cosgriff applied. He contends that he wasn’t hired or even interviewed for it because of his gender.

Cosgriff is used to people raising eyebrows at his coaching women’s basketball. He has been coaching girls’ basketball at Hopkins High School for 20 seasons, winning 18 conference titles and seven state championships along the way.

But before this series of successful seasons put him in the Minnesota Girls’ Basketball Hall of Fame, Cosgriff said his position at the head of the girls’ team was “controversial.” He had to work to earn the trust of the community.

“I brought a work ethic and an attention to detail,” Cosgriff said. “If you ask anyone around here they’ll say that nobody works harder.”

He applied to the same position at the college in 2015, but said he knew it was unlikely that he would get hired.

“Mac being Mac, I knew I wasn’t getting the job because I wasn’t a woman,” Cosgriff said.

But after other alumni encouraged him to try for the position again, he decided to put himself up for the job in 2019.

Cosgriff was frustrated that, even with his record, he never even made it to the interview phase of the search process.

“I was really bummed out to be honest,” Cosgriff said. “Why wasn’t I even given a phone call?… At the end of the day, you have to hire the best possible person. Whether it’s male, female, whatever.”

While Brooks didn’t comment on the extent to which Cosgriff’s gender played a role in how he was considered, the question of how gender affects coaching is a complicated one.

This spring, Notre Dame Women’s Basketball head coach Muffet McGraw announced that she will not hire a man on her coaching staff.

Earlier this month, 17-year-old track prodigy Mary Cain made international headlines when she reported that her male coaches at the Nike Oregon Project disregarded her health, forcing her to lose weight beyond her body’s healthy limits.

Although Division-III athletics are far removed from the stakes of world-class athletics, the gender dynamics at both levels are not dissimilar.

Brooks said that he works hard to ensure that “strong  women” applicants are considered in his hiring pools. Earlier this semester, he created two additional positions in the athletic department with an eye towards hiring individuals with identities underrepresented in the department: Assistant Director of Sports Information and Athletics Operations Assistant. He hired women for both roles.

However, he doesn’t buy into McGraw’s coaching philosophy — at least not at Mac.

“I do not believe that only women should be coaching women,” Brooks said. “I think particularly at a place that’s as thoughtful as Macalester is around gender, there are a lot of scenarios where we can have men coaching women.”

The Mac Weekly reached out to various members of the Women’s Basketball team for comment on the issue of gender and coaching, but received no response.

Lydia Simpson ’20 is a captain of the Women’s Cross Country team, which also started with a new head coach this year. This time, Brooks did hire a man to be Director of Track & Field and Cross Country: Dan Schofer.

After spending her previous three seasons at Macalester running for a female head coach, Betsy Emerson, Simpson said that the transition was a bit jarring for her and the rest of the team. Rather than having the coaches as pillars of the team’s culture of female empowerment, the responsibility has transferred largely to the students themselves.

“[Schofer is] super amazing, but I think the dialogue about women empowerment that is really central to our team now comes more from the team itself,” Simpson said. “Dan is super supportive of us, and he also talks about us being strong women, but when we want to put the focus on, ‘we are strong women,’ that has to come from us.”

For the moment, however, Simpson is satisfied. She said that despite initial hesitations, Schofer was the right person for the job and came with a strong endorsement from Emerson and former head track coach Margaret Gehring.

Simpson said that when it comes to hiring coaches, credentials and coaching style have to come before gender. All else being equal, however, Simpson does think gender matters.

“The way power dynamics in gender remain in sports, it’s always going to be different,” she said.

“I would rather have a strong man coach than a bad woman coach as opposed to hiring her just for the sake of gender,” Simpson continued. “But if you had an equally qualified man and woman coach, I guess I would prefer a woman for a coach.”

As for Cosgriff, Brooks said he trusts these types of instincts in his student-athletes — that’s why he relies so heavily on the hiring committee when evaluating applicants. If students are leaning toward certain applicants, regardless of gender, he will follow their instincts.

“[Men] are overrepresented in coaching,” Brooks said. “So, we have to take off our blinders in that sense.”

Gender aside, with her experience teaching at a college in the past and her passion for education, Brooks said that current Women’s Basketball head coach Katie Kollar was a natural fit for Macalester’s academic environment.

Brooks said that there are always well-credentialed and interesting candidates like Cosgriff that get passed up during the hiring process, but the right person usually winds up making the final cut.

“Everybody who makes it to the finalist pool is more than qualified but the voice of the committee and just as importantly…  the voice of our students plays a large role in helping me make decisions on the hires we make,” Brooks said.

“Timing is everything in the hiring process and you never know when your time is going to be.”